A Republican office was attacked. Here's how Democrats helped in response.

People across the political spectrum condemned the attack. 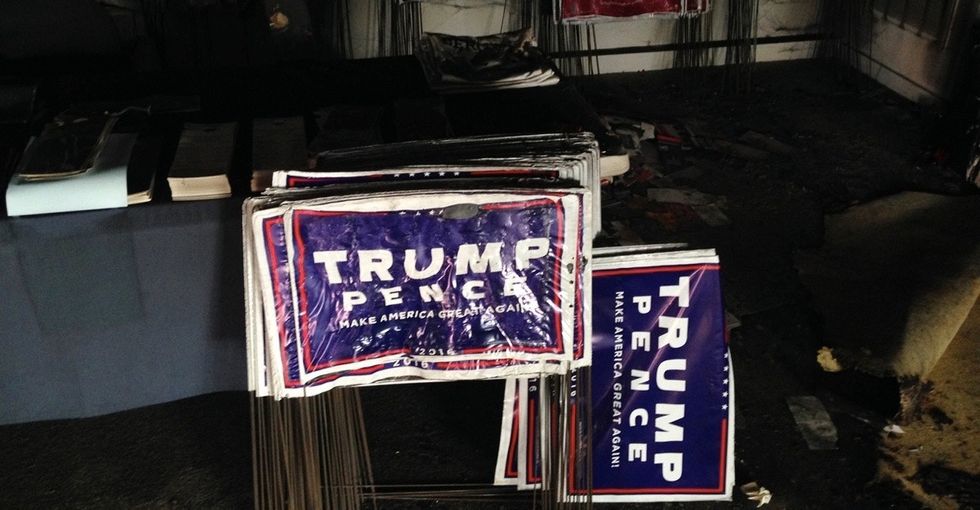 A Republican Party outpost in Orange County, North Carolina, was firebombed over the weekend. Luckily, nobody was hurt.

An already tense election season took a turn for the worse as pictures emerged showing the charred aftermath of what some were quick to label an act of political terrorism.

While it's unclear who carried out the attack, it was quickly condemned by people from across the political spectrum.

The attack on the Orange County HQ @NCGOP office is horrific and unacceptable. Very grateful that everyone is safe.
— Hillary Clinton (@Hillary Clinton)1476652428.0

Trump's chosen rhetoric, assigning blame to Clinton and North Carolina Democrats, didn't seem to bode well for anyone hoping for a calm, level-headed investigation into the attack.

A few short hours later, a group of Democrats did something many would have considered unthinkable just a day earlier: They gave money to the Republican Party.

Led by David Weinberger, a senior researcher at the Berkman Klein Center for Internet & Society at Harvard Law School, a small group of Democrats launched a GoFundMe campaign to help the Republicans rebuild and reopen the office. Within hours, they raised more than $13,000 from 550 donors.

"As Democrats, we are starting this campaign to enable the Orange County, North Carolina Republican office to re-open as soon as possible," reads a statement on the GoFundMe page. "Until an investigation is undertaken, we cannot know who did this or why. No matter the result, this is not how Americans resolve their differences."

Helping the GOP reopen its Orange County office seems like a noble thing to do, but not all Democrats agreed with the decision.

Some pointed to the fact that there's still no way to know who carried out the attack or what their political leanings are — as Josh Marshall at Talking Points Memo notes, situations that look like politically-motivated attacks aren't always what they seem. Others noted the fact that any damage to the office would likely be covered by insurance.

The attack was wrong — that is something we can all agree on. Giving money to the Republican party in North Carolina, however? The same party that tried to enact a voter ID law designed to disenfranchise people of color? The same party that pushed through virulently anti-LGBTQ legislation? To some Democrats, that didn't make sense.

A list of North Carolina organizations in desperate need of funding quickly popped up on social media for people in search of a good cause to donate to instead of (or in addition to) the GOP.

A man in Lumberton, North Carolina, walks down a flooded street in the wake of Hurricane Matthew. Photo by Sean Rayford/Getty Images.

The response to the attack — whether or not donating money to the North Carolina Republican Party is the morally right response — is one on which reasonable people disagree, and that's OK.

In the end, nobody got hurt, the GOP office has funds to reopen, and hopefully, some money that wouldn't have otherwise been donated made its way to a few important charitable causes.