Sometimes, a photo is worth a thousand words — and an amazing tool in helping cancer patients. 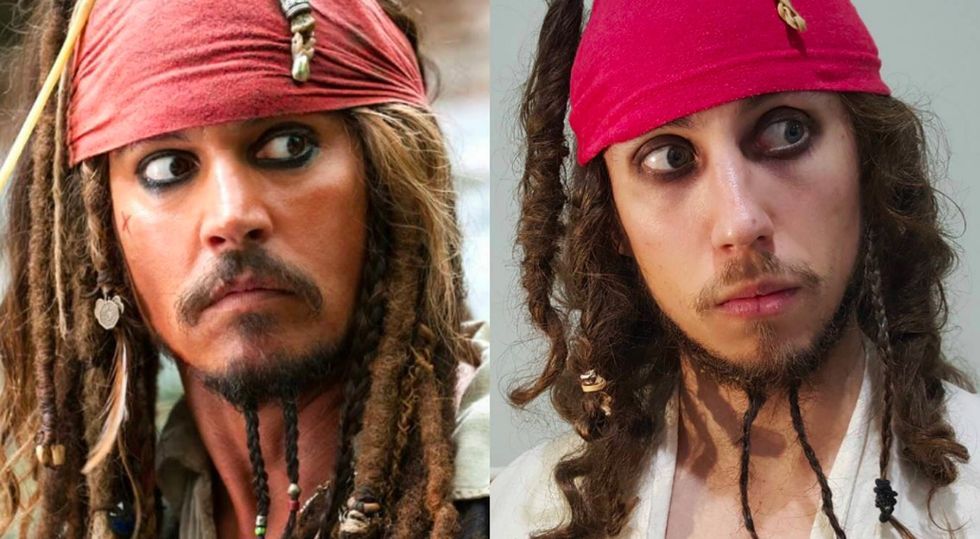 A patient broke down in front of Mark Udovitch and her tears changed his life forever.

She'd just lost her hair after undergoing chemotherapy and it was downright devastating for her — so much so, in fact, the patient said it was worse than losing her breast to cancer.

"This was a really profound thing to say," Udovitch, a radiologist from Australia, explained to Upworthy.

So he came up with an idea.

Udovitch decided to grow out his own hair so he could help people like her. Because — as the woman had explained — most of the wigs she had access to were itchy and looked fake.

He wanted his hair, in some small way, to make a difference.

It wasn't long before Udovitch started getting comments about his longer, luscious locks.

Because apparently, he had some celebrity look-alikes.

Many folks started chiming in: Udovitch looked like the lead the singer of Creed, some said. And the lead singer of Nickelback, others noted. He got Kenny G too.

This sparked another idea: What if this funny celebrity intrigue over his hair could further help patients who could use it?

Thus, a new campaign was born. And the (hilarious) evidence has spread all across the internet.

He did it to help benefit the charity Dry July — and the results are ... amazing.

Dry July is a group doing a whole lot of good benefitting cancer patients in ways that are often overlooked when we think about their quality of life.

The nonprofit has helped fund worthwhile products and services at the Liverpool Cancer Therapy Center, where Udovitch works on the radiation oncology team. A few years ago, for instance, Dry July helped the center purchase much more comfortable chairs for patients undergoing chemotherapy — a treatment that entails sitting in one place for several hours — Udovitch explained.

So far, members of his fundraising team — which also joined in on the photo fun — have raised over $20,000.

It's clear from his photos that Udovitch has his finger on the pulse of pop culture, too. Just look at his "Game of Thrones" re-creations.

He can also pull off "Star Wars."

I mean, he's got the lightsaber down and everything.

And he's basically part of the Kardashian-Jenner family now.

"Staff [at the cancer therapy center] loved that I managed to make a garbage bag, kitchen gloves and a Diet Coke-Mentos explosion look so good," he said.

The photos are lighthearted and fun, of course. But the underlying motivation behind Udovitch's re-creations is about far more than a few laughs.

"Working as a radiation therapist for the past eight years has given me incredible perspective on life and has taught me that you cannot take your health for granted," he said.

"The idea that a charity like Dry July exists — and that their sole mission is to provide support and comfort to cancer patients across Australia — was one that I was very keen to support."

Soon, Udovitch's wavy locks will be gone. But there's still time for you to make a difference.

Udovitch will shave his head on July 29, 2016, at the Dry July Shave Off. (Unfortunately, the celebrity doppleganger remarks may disappear along with that long, brown hair.)

But you can still help his fundraising team do big things. They want to raise enough money to provide services like wireless music to patients during treatments — that way, patients can have customized playlists to help with their anxieties — and decorative artwork to give the department a splash of color (and look less like a cold, sterile clinic), Udovitch said.

To Udovitch, drawing attention to this campaign has been quite a ride.  "The entire experience has been overwhelming," he said.

But it's certainly been worth it.

"Obviously our message is resonating well with everyone," he said. "And it is so great to see the general public get on-board with us so that we finish our fundraising campaign strong!"

If you're interested in supporting Udovitch's team, check out their fundraising page and learn more about their efforts on Facebook.