A pro-life and a pro-choice protest collided. There was singing and hugs. 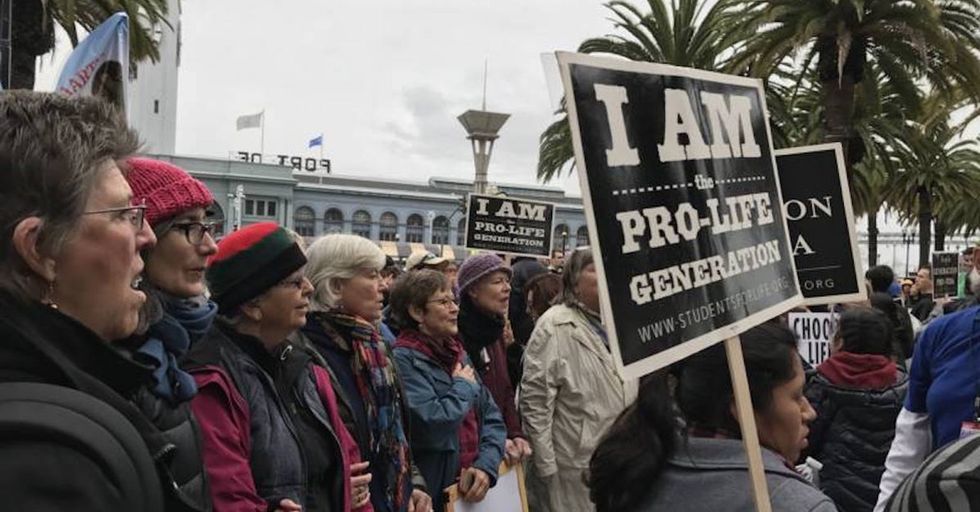 On Jan. 21, millions of women across the country and world marched for equality. But not all of them agreed on what that meant.

Kate Munger, a 67-year-old Bay Area resident, had been asking around to find out what kinds of demonstrations might be going on nearby when she got wind of the Walk for Life West Coast, a massive march against abortion rights that takes place every year in San Francisco.

This year, the Walk for Life and the Women's March happened on the same day.

Munger says she is strongly pro-choice, but abortion rights haven't always been her primary passion. Still, she saw this sharp coincidence as a powerful opportunity to practice democracy.

Munger, a lifelong singer and founder of the Threshold Choir, called up all the vocalists she knew and asked if they'd be willing to help her confront the Walk for Life ... with song.

She imagined meeting the opposition head-on with "blessings and songs." She wanted to fiercely oppose their ideas while also upholding their right to campaign for their own issues.

Many of her friends agreed. But in the end, she found 11 singers willing to join her.

On the day of the march, Munger and her fellow singers traveled to San Francisco by ferry and began with some vocal warmups.

After a little practice — and steeling themselves for the confrontation ahead — the group took its place. They began to sing as thousands and thousands of pro-life activists bore down on them.

For hours, they hardly stopped to take a breath, let alone utter an antagonistic word. The 12 women simply sang, while holding a sign that said the rest:

"We don't agree with you AND we uphold your right to your beliefs in our democracy."

Munger says it wasn't easy to maintain composure. "We were two lines of six women being bored down on by literally hoards of people. At times it was really scary."

Most of the Walk for Lifers didn't pay any mind or didn't seem to get the message. But the few that did? Munger says "that made all the difference."

According to an article by Emma Silver for KQED, one marcher stopped to hug Munger and the other singers before continuing on.

Others appreciated an opportunity for peaceful disagreement. That's really what Munger's demonstration was about, even more than abortion.

Though it was about that, too.

"I think we need to exercise our democracy, practice our democracy, not take it for granted," she says. "I don't feel that Donald Trump [and his administration] are showing any respect for democracy."

She's right. With so many people actively dismissing or criticizing protest efforts following the election, it's fair to wonder if the very pillars of our society are at stake.

And if they are, the voices of women and people of color are at the greatest risk.

Kudos to Munger for exercising hers without drowning out others in the process.