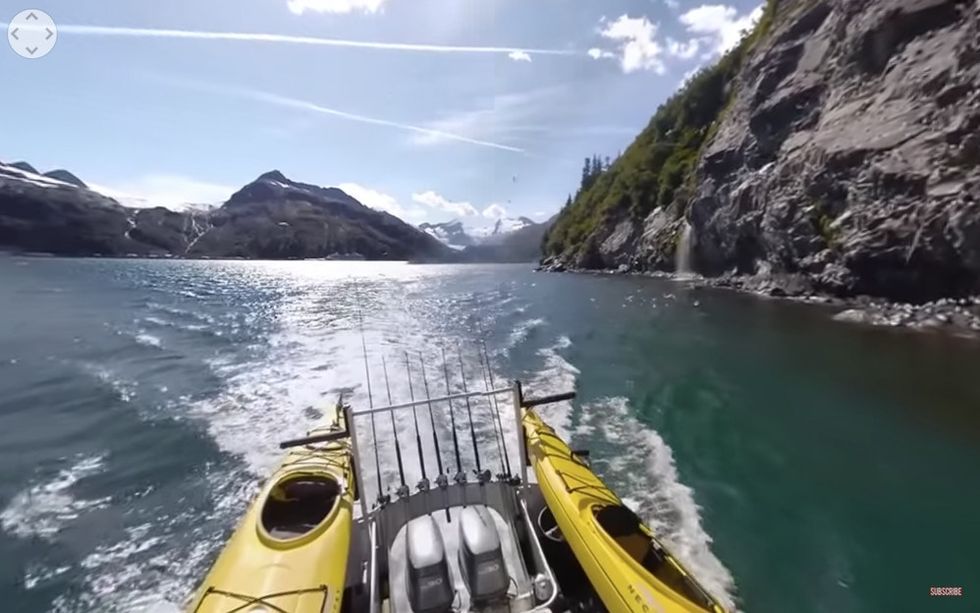 Jared Leto: Is there anything he can't do?

Aside from being the lead singer and guitarist for the award-winning rock band Thirty Seconds to Mars...


GIF from the music video for "A Beautiful Lie" by Thirty Seconds to Mars, which was actually filmed on a glacier.

...and a former teenage heartthrob.

GIF from "My So-Called Life."

Now he can add "Virtual Reality Tour Guide" to his resume as well.

But thanks to a new collaboration between RYOT and the Sierra Club, you can be physically transported as well.

This short interactive film, titled "Act in Paris," immerses the viewer in a 360° tour of Alaska's gorgeous melting glaciers.

Don't worry — you don't need one of those big clunky virtual reality helmets or Google Cardboard or any other extra-fancy tech to enjoy the experience.

As with all YouTube 360 videos, you can use the directional buttons on the screen or the arrow keys on your keyboard to guide your way around the glacier while you listen to the mellow tone of Leto's voice.

You can also download the RYOT VR app and experience the whole thing on your smartphone, either by touching the screen...

...or by literally spinning around the room (although you might get some weird looks).

Pretty cool, right? But what does a VR tour of Alaska have to do with Paris?

This December, the United Nations is hosting a massive climate action conference in Paris with the goal of bringing the world together to enter into a universal and legally binding agreement to fight climate change before it's too late.

As for Alaska, it's ground zero for climate change damage, along with the rest of the Arctic Circle.

As Jared Leto's serene voice will tell you during your immersive video tour, melting glaciers and rising temperatures have had a devastating impact on the Arctic, and it's only getting worse.

The inside of a melting glacier.

Alaska's scenic landscapes show us just how bad the damage is — and what's in store for the rest of us if we don't act.

The Arctic Circle might seem remote, but the effects of climate change have left their mark on the rest of the world as well. It's not quite as apparent yet, but it is happening — and it's happening exponentially faster as the Arctic gets worse.

So as you soak in the sights on your virtual tour, consider what would happen if it all just disappeared.

And if by some chance you aren't feeling moved by the jaw-dropping beauty of the Arctic Circle, consider that wherever you live, the exact same things are happening all around you, whether you notice them or not. Check it out:

The time has come for us to make a difference — because we might not have another chance to stop the damage.

Visit ActInParis.org to find out more and to demand that the world's leaders come together with an action plan while they still can.

Cats are notoriously weird. Everyone who's had cats knows that they each have their own unique quirks, idiosyncrasies, preferences, habits, and flat-out WTFness.

But even those of us who have experience with bizarre cat behavior are blown away by the antics this "cat dad" is able to get away with.

Kareem and Fifi are the cat parents of Chase, Skye, and Millie—literally the most chill kitties ever. They share their family life on TikTok as @dontstopmeowing, and their videos have been viewed millions of times. When you see them, you'll understand why.

Take Chase's spa days, for example. It may seem unreal at first, but watch what happens when Fifi tries to take away his cucumber slices.

When she puts them back on his eyes? WHAT?! What cat would let you put them on once, much less get mad when you take them off?

This cat. Chase is living his best life.

But apparently, it's not just Chase. Skye and Millie have also joined in "spaw day." How on earth does one couple end up with three hilariously malleable cats?

Oh, and if you think they must have been sedated or something, look at how wide awake they are during bath time. That's right, bath time. Most cats hate water, but apparently, these three couldn't care less. How?

They'll literally do anything. The Don't Stop Meowing channel is filled with videos like this. Cats wearing glasses. Cats wearing hats. Cats driving cars. It's unbelievable yet highly watchable entertainment.

If you're worried that Kareem gets all the love and Fifi constantly gets the shaft, that seems to be a bit for show. Look at Chase and Fifi's conversation about her leaving town for a business trip:

The whole channel is worth checking out. Ever seen a cat being carried in a baby carrier at the grocery store? A cat buckled into a car seat? Three cats sitting through storytime? It's all there. (Just a heads up: A few of the videos have explicit language, so parents might want to do a preview before watching with little ones.) You can follow the couple and their cats on all their social media channels, including Instagram and YouTube if TikTok isn't your thing, here.

If you weren't a cat person before, these videos might change your mind. Fair warning, however: Getting a cat because you want them to do things like this would be a mistake. Cats do what they want to do, and no one can predict what weird traits they will have. Even if you raise them from kittenhood, they're still unpredictable and weird.

And honestly, we wouldn't have them any other way.

From Your Site Articles
Related Articles Around the Web
humor