A new report uncovers the state of child marriage today. All eyes are on 26 countries. 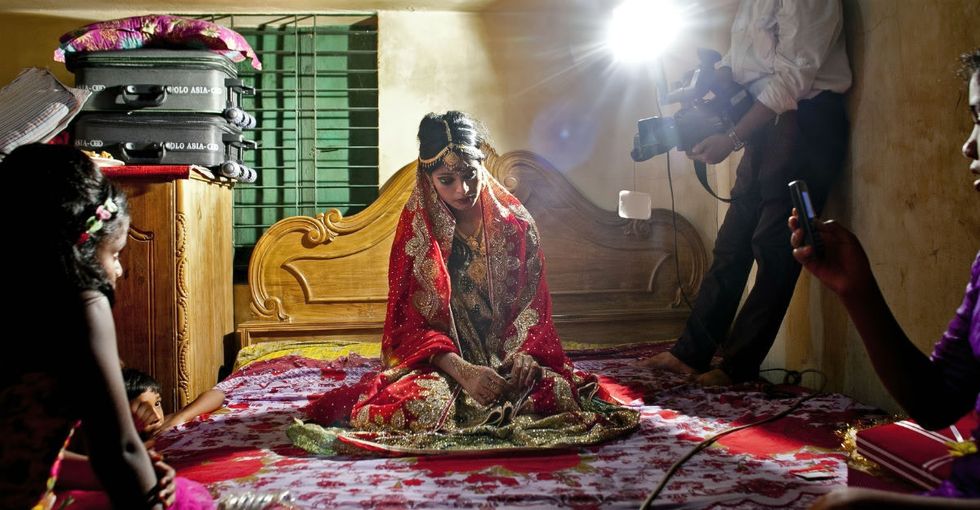 When she was 15, Jobeda Begum came home from school to find out she was getting married. The very next day.

She had no say in the matter. What a moment for a 15-year-old.

All images courtesy of CARE.

"I wanted to study to 12th grade," she said in a new report from CARE. "I wanted to be a teacher. That was back then. It's gone now. It's a dream long gone."

Sadly, Jobeda's story — getting married, dropping out of school, and getting pregnant, all at a very young age — isn't unique.

It's a reality that CARE is committed to changing. In their new report, "Vows of Poverty," the organization is taking a closer look at the 26 countries where girls are more likely to walk down the aisle than attend and complete secondary school. The three countries that come in last? Central African Republic, Chad, and Niger. You can read the full country list here.

Some are as young as 8 years old. Can you imagine?

Though child marriage rates are down globally, it's still happening ... a lot.

Early marriages are motivated by economic insecurity, religious and cultural customs, human trafficking, inadequate laws, and more. But regardless of the reasons, it almost always cuts a girl's education short and keeps her from living to her full potential.

That's why the work from CARE, Girls Not Brides, and the Let Girls Learn initiative from first lady Michelle Obama is so important to reducing the practice and allowing girls to choose their own paths in life.

A young woman's income-generating potential increases by 20% for every school year she completes beyond fourth grade. When countries put early marriage before a girl's education, it's a sure way to stay in poverty.

It also keeps our world from being its very strongest.

Thankfully, we're in a better position than ever to help change the course of history for millions of girls — and our world. And there's reason to believe it's already happening.

13-year-old Nishi Moni is one of several girls in Bangladesh who may well avoid forced early marriage.

She's been working with a local woman's empowerment group called EKATA on the harmful effects of early marriage. Together, they've been discussing with her parents and urging them not to force their young daughters into the practice.

This is how minds are changed — one at a time.

But we can do more, and we must. Today there are 700 million women who were forced to marry as girls. If nothing more is done, another 500 million will join them by 2050.

Not if we can help it.

It takes just a few seconds to show you're paying attention to millions of girls just like Jobeda and Nishi. Want to support an end to child marriage around the world? Add your name here.

Here's to a smarter, richer, more powerful world where all girls get the chance to shine. We'll all be so much better off for it. <3