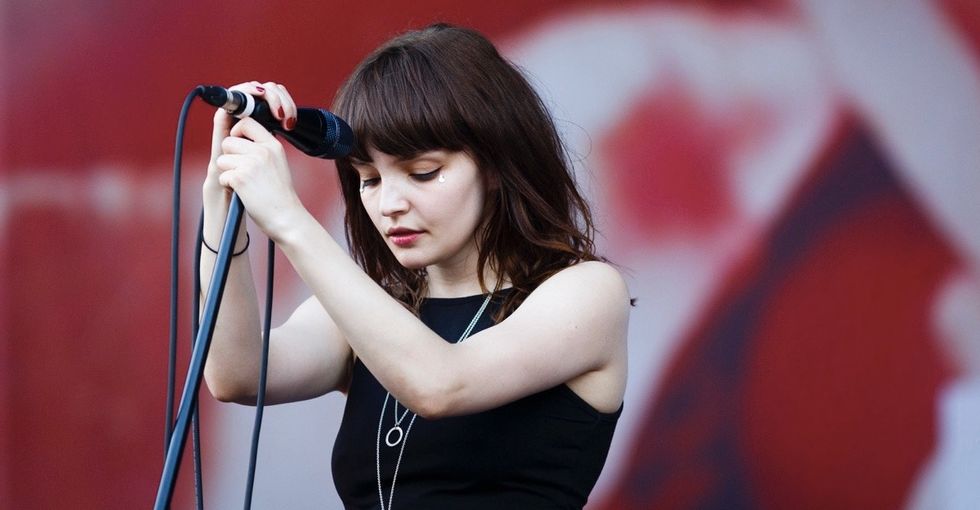 Mayberry told the guy off, which led to articles with titles like "Watch Chvrches' Lauren Mayberry Put Marriage Proposing Fan In His Place" and "CHVRCHES' Lauren Mayberry destroys heckler who asks her to marry him."

But what's the big deal? It's not like he was serious. Well...

No, I sincerely doubt that the man in the crowd expected Mayberry to throw down her microphone and jump into his arms. Him saying "marry me" was probably more of a stand-in for "I like your music and respect you as a human being with boundaries!" (OK, maybe not that last bit.)

It's a little more complicated than that.

If you know a bit more about Chvrches' backstory, Mayberry's response makes a lot of sense.

Throughout the band's career, Mayberry has been outspoken against music industry sexism and online harassment.

In 2013, Mayberry posted a screenshot of a message sent to the band's Facebook page that read, "Could you pass this correspondence on to the cute singer, I think we'd make superior love together, and very much would like to take her to dinner." After responding, "No. That's disgusting," Mayberry was told it was a "very puritanical stance" to take.

Her response was simple: "Please stop sending us emails like this." In response, she received a slew of responses containing threats, twisted sexual fantasies, and general disregard for her existence as a human. That month, she penned an opinion piece for The Guardian, "I will not accept online misogyny."

"But why should women 'deal' with this?"

Her post at The Guardian was a powerful rebuttal to anyone who has ever told her (or any female musician, for that matter) that she should just "deal with" harassment.

"I absolutely accept that in this industry there is comment and criticism. There will always be bad reviews: such is the nature of a free press and free speech. ... What I do not accept, however, is that it is all right for people to make comments ranging from 'a bit sexist but generally harmless' to openly sexually aggressive. That it is something that 'just happens.' Is the casual objectification of women so commonplace that we should all just suck it up, roll over and accept defeat? I hope not. Objectification, whatever its form, is not something anyone should have to 'just deal with.'"

Years later, the harassment continues. But Mayberry isn't giving up.

Earlier this year, Mayberry posted another screenshot of a message sent to one of the band's social media accounts on her personal Instagram page. The message, in which an anonymous voice from the Internet threatens to sexually assault Mayberry with a cheese grater, was posted alongside Mayberry's eloquent response.

"My band is lucky enough to have some of the most awesome, supportive and respectful fans in the world and we are so excited to be in the studio making an album to share with them. Yet, on a daily basis, we still receive communications like this. These people never learn that violence against women is unacceptable. But they also never learn that women will not be shamed and silenced and made to disappear. I am not going anywhere. So bring it on, motherfuckers. Let's see who blinks first."

So, in hindsight, maybe yelling "Marry me!" at Lauren Mayberry wasn't the best idea.

The man may have meant well, but combined with the sexualized messages from other fans and critics alike, it creates an atmosphere of uncomfortable, unwanted comments. It's a lot like street harassment: While the intention might have been to "compliment" someone, the effect can be something so completely different.

Watch Mayberry's showdown with the "Marry me" guy in the video below.