A dad dressed as Darth Vader to wake up his son. The kid's reaction is pure 'Star Wars.' 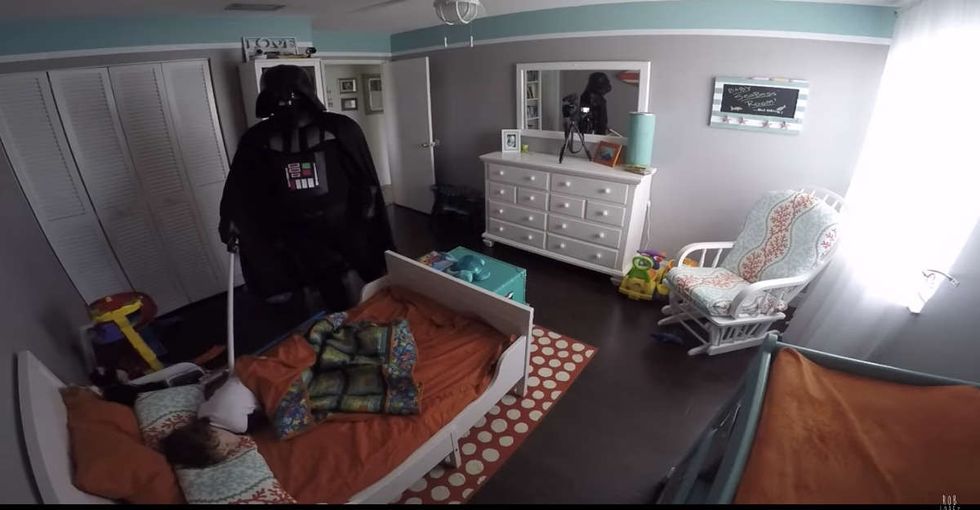 This article originally appeared on 05.06.16

Dads are ridiculous. But perhaps, in the world today, there is no dad quite so ridiculous as Rob Lopez:

On a morning not too long ago, Lopez apparently had the following thought: "I'm going to dress up as Darth Vader and wake up my 2-year-old."

Clearly, the correct follow-up thought is, "No. That's silly. Why would I ever wake up a 2-year-old. Like, on purpose."

But not for Rob Lopez. Oh, no.

...and receiving the mission critical sign-off from his wife.

He grabbed his lightsaber and gave it a go. The results ... pretty much speak for themselves (fast-forward to 1:05 for the main event).

There are a couple of things about Lopez's son's reaction that we should talk about.

(First, this child is objectively the hardest core human on the face of planet Earth right now.)

He grabs the lightsaber he keeps next to his bed (just in case) and it's game on, Dark Lord of the Sith. Game. On.

Think about how you would feel, as an adult person, in complete control of your faculties, with a firm grasp on the difference between fiction and reality, being aggressively prodded awake by a six-foot-tall man in a full-body Darth Vader mech-suit complete with voice modulator and terrifyingly heavy breathing.

Think about how loud you would scream and the volume of pee you would pee into your pants.

Meanwhile, this toddler — who is probably no more than three feet tall, groggy and vulnerable, with no cognitive ability to discern this is not the real Darth Vader — didn't even think twice about taking him on.

GIF from "Return of the Jedi."

Perhaps the most impressive part? At a mere 2 years of age, he's already learned, perhaps, the single greatest lesson of "Star Wars."

You don't defeat the dark side with mad lightsaber skills (although they are fun to show off).

You defeat it with compassion.

...which, in this kid's case, involves casually grabbing a book and asking Darth Vader to read him a story.

Empathy for Siths — with an assist from curiosity and literacy: That's a lesson we could all use.

Keep ReadingShow less
heroes
Get stories worth sharing delivered to your inbox
By signing up you agree to Upworthy's privacy policy.
Pop Culture

Cameron Stewart, a British photojournalist and camera operator, recently shared how he was able to score business class tickets at a fraction of the price, simply by switching the website language from English to Spanish.
Keep ReadingShow less
travel
Get stories worth sharing delivered to your inbox
By signing up you agree to Upworthy's privacy policy.
Trending Stories
relationships
Internet