5 real things you can do right now to fight Donald Trump's 'Muslim ban.'

The president's executive order is a shocking reversal of American values. 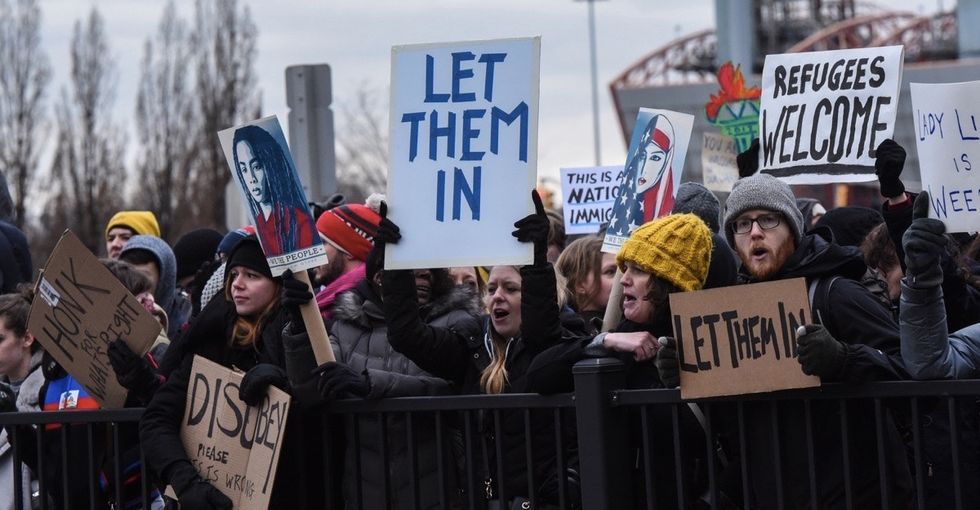 Titled "Protecting the Nation from Foreign Terrorist Entry into the United States," the executive order has the effect of placing a hold on the U.S. refugee program and restricts travel from Iraq, Syria, Iran, Libya, Somalia, Sudan, and Yemen. The order also stipulates that of the refugees who are let into the country, Christians will be prioritized over Muslims.

Within hours of the order's signing, its effects became clear. At major U.S. airports around the country, more than two dozen individuals covered by the newly implemented restrictions were detained upon arrival. Additionally, the Department of Homeland Security confirmed that the order would also have the effect of banning green card holders from seven countries from re-entering the U.S. In all, the order could block up to 500,000 legal U.S. residents from exiting and re-entering the country.

Though the administration has insisted this is not a "Muslim ban," Muslims will be disproportionately affected by Trump's actions. In December 2015, then-candidate Trump called for "a total and complete shutdown of Muslims entering the United States until our country's representatives can figure out what is going on." For what it's worth, Michael Flynn Jr., son of Trump's National Security Advisor Michael Flynn, celebrated the order on Twitter as a "Muslim ban."

Banning people on the basis of where they're from or what their religion is, is quintessentially un-American. It's a slap in the face to the men and women who founded this country on a principle of religious liberty, and it's a show of disrespect for the men and women who have put their lives on the line to protect our national ideals at home and abroad.

Since the order was signed, people have taken to the streets in protests, donated to causes dedicated to ensuring the safety and rights of immigrants and refugees, and legal challenges have already begun to work their way through the courts, with stays reportedly being issued Saturday evening to halt any immediate deportations.

The fight on this is just beginning. Here are five things you can do right now to help:

1. Donate to causes supporting legal challenges to the order.

The American Civil Liberties Union has filed suit against the Trump administration, arguing that his executive order is unconstitutional.

On Twitter, musical artist Sia announced matching donations to the ACLU up to $100,000, and entrepreneur Chris Sacca said he would match donations up to $75,000.

As news of the challenges facing the detained travelers emerged, protesters began showing up at the affected airports with a simple message: This is not who we are.

ThinkProgress has a running list of upcoming protests against the ban.

3. Donate to the Council on American-Islamic Relations.

In the lead-up to last year's election, anti-Muslim sentiment seemed to be on the rise. In the months since, documented instances of Islamophobic attacks and hate crimes have seen a spike. The Council on American-Islamic Relations (CAIR) is a civil rights advocacy organization that works to resolve instances of anti-Muslim discrimination through mediation, negotiation, public pressure, and legal action.

On Twitter, musician Grimes offered to match donations to CAIR up to $10,000.

Where do your politicians stand on Trump's executive order? Have they released any sort of statement? Either way, it's a great chance to reach out to their offices. Representatives and senators cannot single-handedly undo an executive order, but they can put pressure on the administration to roll back the changes.

5. Speak out, speak up, and let it be known that this is not who America is.

No matter how we voted in November, we are all a part of the same country — and that country should be a welcome home for all.

To paraphrase Emma Lazarus: We should aim to be a welcoming home to the tired, the poor, the huddled masses yearning to breathe free, the homeless, and the tempest-tossed. That's the America we should aspire to be.

So tell your friends, tell your families, share messages of support on social media. We don't need to fear the unknown. In fact, the odds of an American dying as the result of an act of terrorism carried out by a refugee is a minuscule 1 in 3.64 billion in any given year.

Upworthy Staff
Courtesy of Back on My Feet
True

Having graduated in the top 10% of Reserve Officer Training Corp (ROTC) cadets nationwide in 2012, Pat Robinson was ready to take on a career in the Air Force full speed ahead.

Despite her stellar performance in the classroom and training grounds, Robinson feared other habits she'd picked up at Ohio University had sent her down the wrong tracks.

First stationed near Panama City, Florida, Robinson became reliant on alcohol while serving as an air battle manager student. After barnstorming through Atlanta's nightclubs on New Year's Eve, Robinson failed a drug test and lied to her commanding officer about the results.

Eleven months later, she was dismissed. Feeling ashamed and directionless, Robinson briefly returned home to Cleveland before venturing west to look for work in San Francisco.

After a brief stint working at a paint store, Robinson found herself without a source of income and was relegated to living in her car. Robinson's garbage can soon became littered with parking tickets and her car was towed. Golden Gate Park's cool grass soon replaced her bed.

That's exactly what Keiajah (KJ) Brooks did at a Board of Police Commissioners meeting in her hometown of Kansas City this week. The 20-year-old used her approximately four minutes with the microphone—and with the commissioners' undivided attention—to unequivocally lay out her position to each and every one of the officials in that room.

"Fair warning, I'm not nice and I don't seek to be respectable," she began. "I'm not asking y'all for anything because y'all can't and won't be both my savior and my oppressor. I don't want reform. I want to turn this building into luxury low-cost housing. These would make some really nice apartments."

"Firstly, stop using Black children as photo opportunities, 'cause they're cute now, but in 10 years, they're Black male suspects in red shirts and khaki shorts," she said. "Eating cookies and drinking milk with children does not absolve you of your complicity in their oppression and denigration..." she added, before looking directly at the police chief and pointedly calling him out by name, "...Rick Smith."