The Big One is coming. But it's not too late to get prepared. 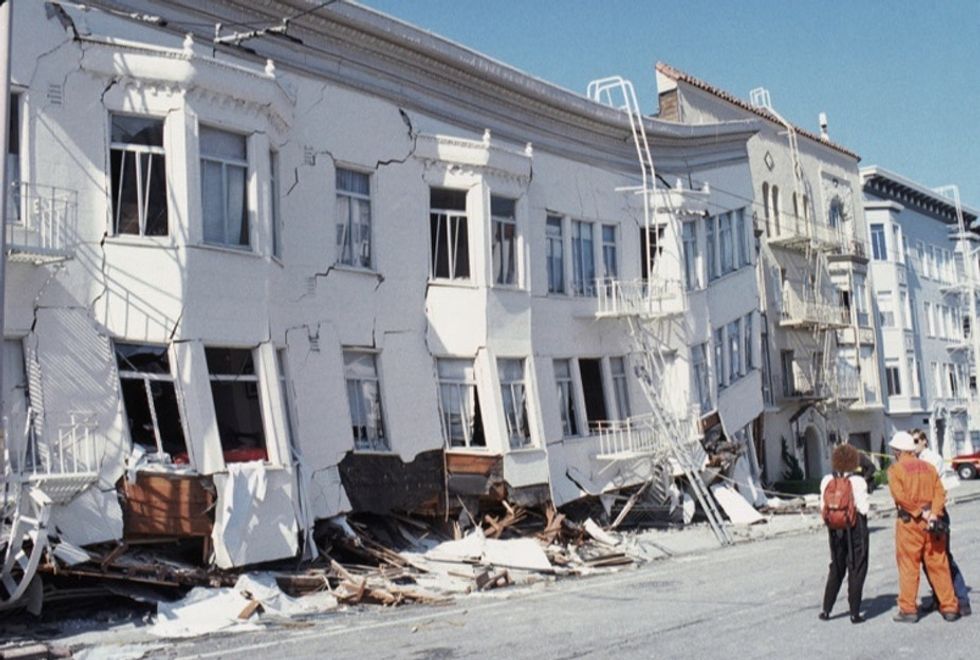 If you haven't heard already, the Big One is coming.

We hear about earthquakes all the time, but we often associate them with blockbuster movies or faraway places like Japan and Nepal and Haiti.

A destroyed building near Kathmandu after an earthquake in Nepal. Photo by Prakash Mathema/AFP/Getty Images.

But the United States is due for a major earthquake of its own.

And despite what every disaster movie wants you to think, that earthquake probably won't happen here:

Because it's much more likely to happen here:

The Big One is set to hit the Cascadia Subduction Zone, a region stretching from Canada to Northern California, and by all estimations it's going to be a doozy.

But even if you don't live in the Pacific Northwest, there are seismic zones across the country that are due for a quake, including the New Madrid zone located across Missouri, Arkansas, Tennessee, and Illinois, and yes — OK, Hollywood darling — San Andreas.

While earthquakes aren't preventable, they are survivable, and one of the best ways to prepare is to create an earthquake kit.

And what goes into a good earthquake kit aside from a life-sized Dwayne "The Rock" Johnson inflatable rescue doll?

If you don't have the time or space to collect everything, here are five items you should be sure to pull together to help you survive for up to two weeks.

1. Water. The stuff of life. You knew it had to make the list, right?

The U.S. government natural disaster preparation site Ready suggests stocking your kit with one gallon of water per person per day. Kids and nursing moms may need a little more.

That may sound like a lot, but water isn't just for drinking, it's for sanitation, cooking, and first aid. You can survive without food for quite some time, but you won't make it long without clean water.

This is not an area you want to skimp on.

2. Food. Consider this an excuse to stock up on all of your favorite canned goods. I see you, Campbell's Chicken and Stars.

The Centers for Disease Control and Prevention suggests stocking your kit with canned and packaged goods that you regularly eat.

This saves you a special trip to the grocery store and may prevent future intestinal distress. Be mindful of expiration dates and swap out the food as it starts to go bad.

And of course, don't forget utensils and a can opener. You can eat with your hands if needed, but a can opener is key.

3. A first-aid kit. Yes, a kit within a kit. Not to be confused with the Swedish folk group, First Aid Kit, but their soothing sounds can't hurt to include, either.

In addition to the usual Band-Aids and alcohol wipes, the Los Angeles Times suggests storing extra essential medications or eyeglasses in your kit.

Don't forget tweezers. Splinters will definitely be a part of your post-earthquake reality.

4. A phone charger. Because the only thing scarier than an earthquake is your mom when she can't get a hold of you.

If your area maintains cell service, your phone will be your lifeline to friends and family. Keep a spare charger in your kit, or better yet, purchase a portable or solar charger.

Solar power was vital to regaining telecommunication after the Nepal earthquake last April. Nearly 24% of Nepal's citizens lost power, but solar-power stations helped restore a sense of normalcy. We should all take a page out of Nepal's playbook and have solar solutions at the ready in case of emergency.

It will be frightening and desolate after the big one. Treat yourself to the comforts of two-ply.

For other items to include in your emergency kit, watch Ali Ryan, earth science information officer, unbox her supplies in this video from The Oregonian:

Wherever you live, but especially if you live near a seismic zone, take some time to pull an emergency kit together, and store it away for a rumbly day.

You'll be glad you did.