20 striking photos show the civil rights movement then ... and now.

The more things change, the more the fight remains. 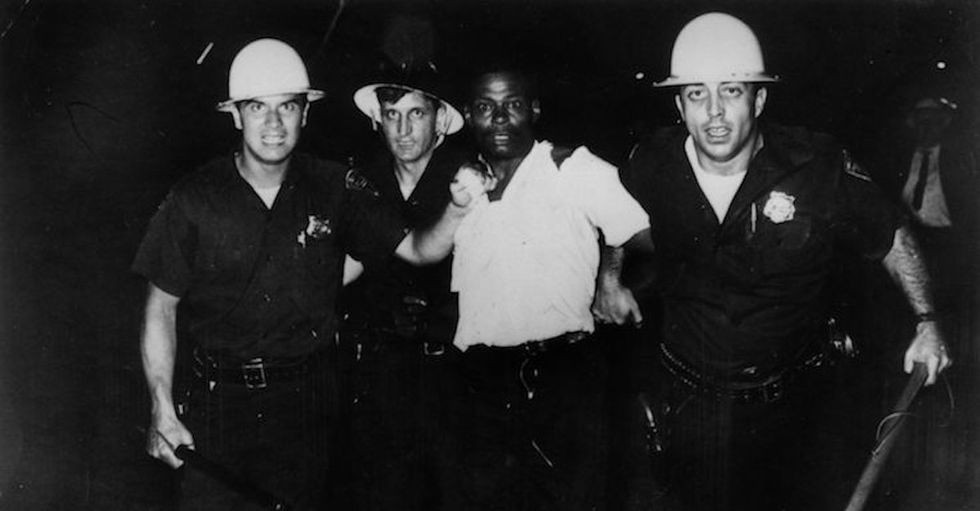 In 1865, the United States government abolished slavery. It gave black men the right to vote in 1870. The Civil Rights Act, signed by President Lyndon Johnson in 1964, redefined America — outlawing discrimination based on race, color, religion, sex, or national origin — ending segregation and other unfair practices that targeted black Americans.

But the movement isn't over.

Institutionalized racism is an awful and ingrained part of American life. Black people make up 13% of the population but are incarcerated at nearly six times the rate of white Americans. Black schoolchildren are three times more likely to be suspended. Black college graduates are twice as likely to be unemployed. U.S. law may promise equality, but reality, it seems, has not caught up.

So the fight continues.

And in many ways, it's not all that different from the one that's already in our history books:

2. These are the signs black protestors carried in 1963 when they marched for jobs and freedom...

And these are the signs they carry today...

Image by Timothy A. Clary/AFP/Getty Images.

...and still fights for them today as a member of Congress representing Georgia.

4. Police were a formidable and regular presence at rallies throughout the 1960s...

...and continue to be so today.

Image by Michael B. Thomas/AFP/Getty Images.

7. In 1965, civil rights leaders marched from Selma to Montgomery, Alabama, to demand equality...

A big difference: This time, the first black president of the United States marched hand-in-hand with them. Image by Saul Loeb/AFP/Getty Images.

8. Civil rights supporters marked the deaths of victims of violence with memorials then...

14-year-old Emmett Till was lynched for whistling at a white woman in 1955. Image by Scott Olson/Getty Images.

This memorial marks the spot where 17-year-old Trayvon Martin was shot and killed while walking with his hoodie up in a gated Florida community. Image by Roberto Gonzalez/Getty Images.

In January 2017, Barack Obama, the first black president of the United States, will finish his second term.

10. In the 1960s, civil rights protestors brought their children to march alongside them...

...and they do the same at marches today.

Image by Michael B. Thomas/AFP/Getty Images.

Martin Luther King Jr. famously said: "I have decided to stick with love. ... Hate is too great a burden to bear."

And what's fighting for equality if not an act of love?