Why the Mothers of the Movement's DNC speech brought us to tears.

Too many mothers have had to bury too many children due to gun violence. These moms are trying to change that. 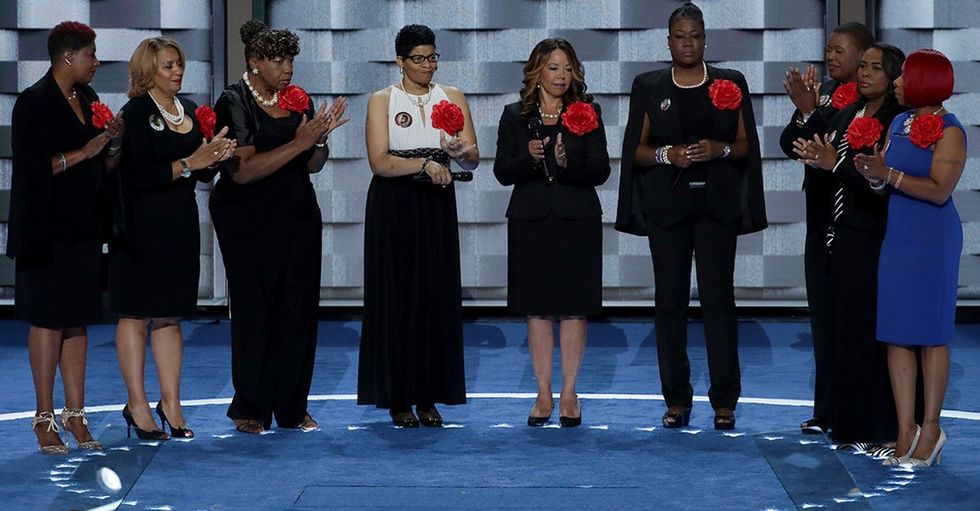 That's how many people have been killed by police in 2016.

That's the number of homicides that occurred in Chicago by Father's Day 2016.

In America, our brothers, sisters, mothers, fathers, children, and friends are dying from gun and police violence at a staggering rate.

During the Democratic National Convention, several mothers whose children have been victims of gun violence made it clear that enough is enough.

The Mothers of the Movement are like most moms: hard-working, caring parents who never dreamed they would lose a child. But their stories are also unique and incredibly important.

The Mothers of the Movement are moms who have lost children to police brutality and gun violence. They have come together to unite against gun violence in the U.S.

Tonight, their emotional stories helped illustrate how far we have still to go in this country.

The Mothers of the Movement led their DNC segment with a tear-jerking speech by Geneva Reed-Veal, Sandra Bland's mother.

She talked about how gun violence and the lack of gun control in the U.S. have torn apart her life and the lives of the other mothers in the group.

"This isn’t about being politically correct. This is about saving our children," Sybrina Fulton said to rousing applause.

Who exactly are the Mothers of the Movement?

Photos by The Young Turks/YouTube (left), Aaron Davidson/Getty Images for Jazz in the Gardens (right).

Trayvon Martin, 17, was a high-schooler walking home with a can of tea and a packet of Skittles when George Zimmerman shot him. Zimmerman was acquitted of second-degree murder in 2013. He auctioned the gun used to kill Martin for $250,000.

During the DNC, Fulton explained why she decided to share her story and join the Mothers of the Movement group.

"I am an unwilling participant in this movement," she said. "I would not have signed up for this, nor any other mother that is standing here today. But I am here today for my son, Trayvon Martin, who is in heaven, but also for his brother, Jahvaris Fulton, who is still here on Earth. I did not want this spotlight, but I will do everything I can to focus some of this light on the pain of a path out of the darkness."

Jordan Davis, 17, was a teenager sitting in a car with friends when he was shot by Michael Dunn, who was upset that their music was too loud. Dunn was found guilty of first-degree murder and given a life sentence without parole.

During the DNC, McBath said she doesn't want other parents to live in fear of what happened to her son. "I lived in fear that my son would die like this," she said. "I even warned him that because he was a young black man, he would meet people who didn't value him or his life. That is a conversation that no parent should ever have with their child."

Sandra Bland, 28, was an outspoken activist with a degree in agriculture from Prairie View A&M University. Bland was arrested during what should have been a routine traffic stop. Three days later, she was found hanged to death in her cell at the Waller County Jail.

Bland's death was ruled a suicide, but many have noted the brutal arrest preceding Bland's death by state trooper Brian Encinia and the edited dashcam footage that was released. Encinia has been indicted for perjury, and thus dismissed by the Texas Department of Public Safety.

Several other Mothers of the Movement did not speak at the DNC, but they stood on stage to support the three who did.

Dontré Hamilton, 31, was a son and uncle. He was unarmed and had been treated for paranoid schizophrenia. Officer Christopher Manney shot Hamilton multiple times. Manney was never charged and was eventually fired from the Milwaukee Police Department.

Eric, a son and beloved father, was confronted by police for selling loose cigarettes in Staten Island, New York. Several police officers surrounded Garner. Officer Daniel Pantaleo used a banned chokehold to restrain Garner, who yelled "I can't breathe" multiple times in an effort to plea with officers. Unfortunately, it was to no avail, and the chokehold ultimately killed him.

A Richmond County grand jury decided not to indict Pantaleo in 2014.

Michael Brown, 18, had just graduated and had plans to go to college. Officer Darren Wilson shot the unarmed Brown several times after, witnesses said, Brown held up his hands in submission. The U.S. Department of Justice cleared him of any wrongdoing and cleared him of violating any of Brown's rights.

Hadiya Pendleton, 15, had just performed with her school at events for President Obama's second inauguration when she was caught in the crossfire of a gang-related shooting in Chicago. Michael Ward, 18, and Kenneth Williams, 20, were arrested on several charges, including attempted murder and first-degree murder. They said the bullets were intended for a rival gang, not Pendleton.

Blair Holt, 16, was killed trying to protect a friend on a Chicago bus. Four other teens were injured in the gang-related shooting. Holt was an honor student and beloved classmate and son. His killer, Michael Pace, was sentenced to 100 years in prison.

Oscar Grant, 22, was unarmed when he was shot and killed by BART police officer Johannes Mehserle in Oakland, California. Grant was beloved in his community and was coming home after ringing in the new year with friends when he was killed in 2009. His brutal killing was captured on camera and was portrayed in the award-winning film “Fruitvale Station.” Mehserle was convicted of second-degree murder but got an early release from prison just a year into his sentence.

These mothers' words were captivating, emotional, and heartbreaking.

They shouldn't have to speak like this, but they did. And they spoke to remind us, through their words, that we have the power to change this. In November, we can use our right to vote to demand action and reject complacency.

"So many of our children are gone, but they are not forgotten," Reed-Veal, Sandra Bland's mother, said. "Sandy cannot speak, but I am here to speak for her. What a blessing to be here tonight so that Sandy can still speak through her mama. And what a blessing for us that we have the opportunity to cast our vote."

"We're going to keep telling our stories, and we're urging you to say their names," said McBath.

By saying their names, we can honor the voices of those who can no longer speak, just like the Mothers of the Movement. But beyond that, we can also help shape a future that no longer requires this discussion.