Climate change isn't pretty. Floods. Droughts. Forest fires. Trillions of dollars to pay for it all. And that's just the tip of the (increasingly smaller) iceberg. 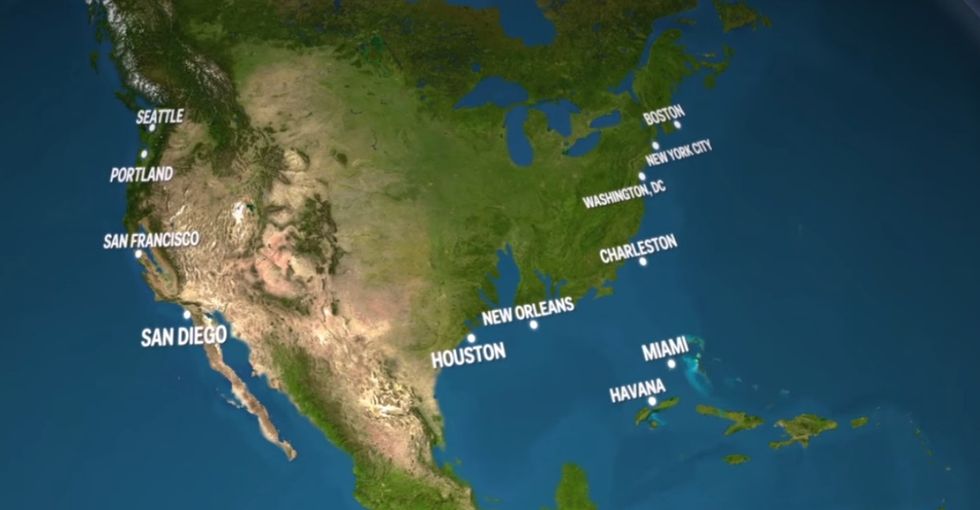 This article originally appeared on 12.08.15

Considering the two largest ice sheets on earth — the one on Antarctica and the one on Greenland — extend more than 6 million square miles combined ... yeah, we're talkin' a lot of ice.

But what if it was all just ... gone? Not like gone gone, but melted?

If all of earth's land ice melted, it would be nothing short of disastrous.

And that's putting it lightly.

This video by Business Insider Science (seen below) depicts exactly what our coastlines would look like if all the land ice melted. And spoiler alert: It isn't great.

Lots of European cities like, Brussels and Venice, would be basically underwater.


In Africa and the Middle East? Dakar, Accra, Jeddah — gone.

Millions of people in Asia, in cities like Mumbai, Beijing, and Tokyo, would be uprooted and have to move inland.

And in the U.S., we'd watch places like Houston, San Francisco, and New York City — not to mention the entire state of Florida — slowly disappear into the sea.

All GIFs via Business Insider Science/YouTube.

Business Insider based these visuals off National Geographic's estimation that sea levels will rise 216 feet (!) if all of earth's land ice melted into our oceans.

There's even a tool where you can take a detailed look at how your community could be affected by rising seas, for better or worse.

Although ... looking at these maps, it's hard to imagine "for better" is a likely outcome for many of us.

Much of America's most populated regions would be severely affected by rising sea levels, as you'll notice exploring the map, created by Alex Tingle using data provided by NASA.

I bring up the topic not just for funsies, of course, but because the maps above are real possibilities.

As we continue to burn fossil fuels for energy and emit carbon into our atmosphere, the planet gets warmer and warmer. And that, ladies and gentlemen, means melted ice.

A study published this past September by researchers in the U.S., U.K., and Germany found that if we don't change our ways, there's definitely enough fossil fuel resources available for us to completely melt the Antarctic ice sheet.

Basically, the self-inflicted disaster you see above is certainly within the realm of possibility.

"This would not happen overnight, but the mind-boggling point is that our actions today are changing the face of planet Earth as we know it and will continue to do so for tens of thousands of years to come," said lead author of the study Ricarda Winkelmann, of the Potsdam Institute for Climate Impact Research.

If we want to stop this from happening," she says, "we need to keep coal, gas, and oil in the ground."

The good news? Most of our coastlines are still intact! And they can stay that way, too — if we act now.

World leaders are finally starting to treat climate change like the global crisis that it is — and you can help get the point across to them, too.

Check out Business Insider's video below: