We've figured out how to solve human-elephant conflict. It takes bees. Lots of bees. 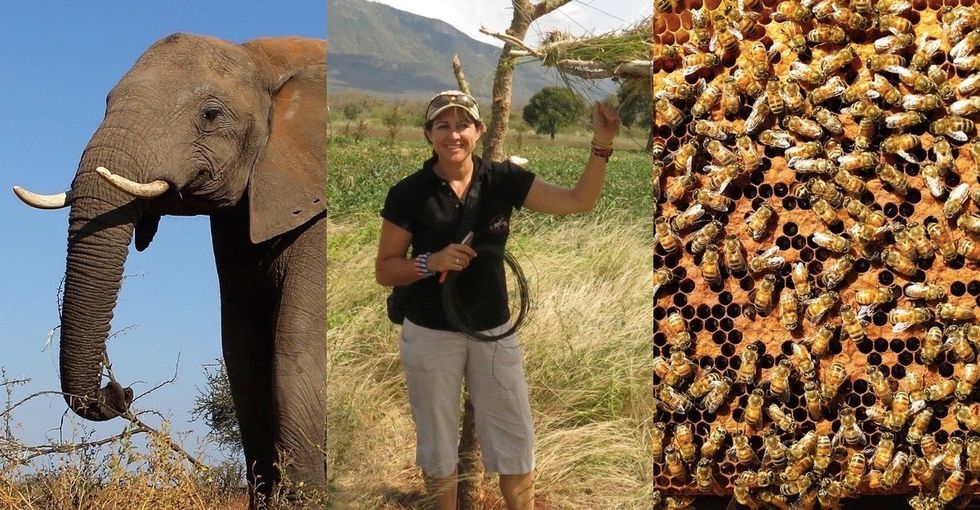 What does a 14,000-pound elephant eat? Whatever the elephant wants.

For those of us in North America, that might sound like the setup to a joke. But for farmers in Africa, it's a real problem.

A fully grown elephant can eat up to 600 pounds of food a day. During a long, hot day of walking around the savannah, a farmer's crop might look like the perfect place for an elephant to rest and refuel.

But an elephant can easily eat everything the farmer has spent the last year growing. And fences — even electric ones — don't always work.

Both people and elephants have been killed in these conflicts.

But there is a new kind of fence that could dramatically change the relationship between farmers and elephants, and it's filled with bees.

Dr. Lucy King and one of her beehives. Photo by Elephants and Bees Project, used with permission.

Dr. Lucy King and her team at the Elephants and Bees Project have been working on this fence since 2006.

The idea comes from an interesting observation: Elephants really, really do not like beehives.

That's because although elephant hides can be very thick in places, bee stings can still hurt, especially around the face and trunk. Elephants won't even eat from trees that have beehives in them.

Local Africans have known that for a while, but when King learned this from her adviser in the mid-2000s (while she was a graduate student), she was intrigued. She travelled to Kenya to learn more about the behavior.

First, King and her colleagues set up tests to see what it was about the bees that was scaring the elephants away. She discovered that just playing the sound of an angry beehive is enough to drive elephants away. There's even a special elephant rumble to warn each other of swarms!

Then one day, King had an "aha" moment under an acacia tree.

It was a hot day and a family of elephants was resting nearby, unaware of a beehive hidden in the acacia tree. Watching the elephants, King's assistant picked up a rock and dinged the beehive with it, sending the elephants — and the researchers — scrambling.

"The alarmed elephant family took off immediately at a run along the river bank kicking up dust until they were out of sight," King said in an email. "We watched the activity in awe until the bees turned their attention to us and I had to drive off at pace to avoid being badly stung."

Watching the beehive swing back and forth on the branch while elephants thundered away gave King the inspiration for her beehive fence design.

The free-swinging beehives are strung up on poles all around a farm. If an elephant touches one (or if it touches one of the long wires that runs between the poles), the beehives will start to bounce and swing. This irritates the bees, which then come out in full force and drive the elephants away from the farmer's crops.

These fences are already being used in at least 11 countries across Africa and Asia.

"We regularly host visitor training days [at the research center] to help other project sites and communities learn how to build beehive fences so they can go back to their own sites and initiate the projects for themselves," King said. They have new crops of researchers and graduate students coming to them too.

They've even put out a Beehive Fence Construction Manual, which is free to download.

The beehive fences aren't perfect — King says a few sneaky and fearless elephants will still get into the crops every once in a while.

But among the communities she's worked with, human-elephant conflicts have fallen 80%. The Elephants and Bees Project is now collaborating with sites all over Africa and Asia to help them construct their own beehive fences.

King is still working with people in Kenya to improve the idea as well. They've been experimenting with mixing "dummy" beehives into the fence to reduce costs. They're also expanding a honey-processing facility.

But this is a win-win solution, as both the farmers and the elephants benefit from it.

The farmers get to keep their crops, which the bees also help pollinate. The farmers can also benefit from beekeeping products such as honey or beeswax, which they can sell to help offset the cost of the fence or use in their own households.

The elephants, meanwhile, benefit from the happy coexistence with humans and increased safety.

"Communities typically don't want trouble," King said. "Only if they are really getting desperate will they want to kill an elephant for crop-raiding."

This is great news because it could potentially alleviate one of the many pressures on elephant populations these days.

Plus, clever ideas like this show how listening to local knowledge, combined with careful observation and study, can lead to effective solutions to real problems.