'With this episode, they see a family that looks like our family.' 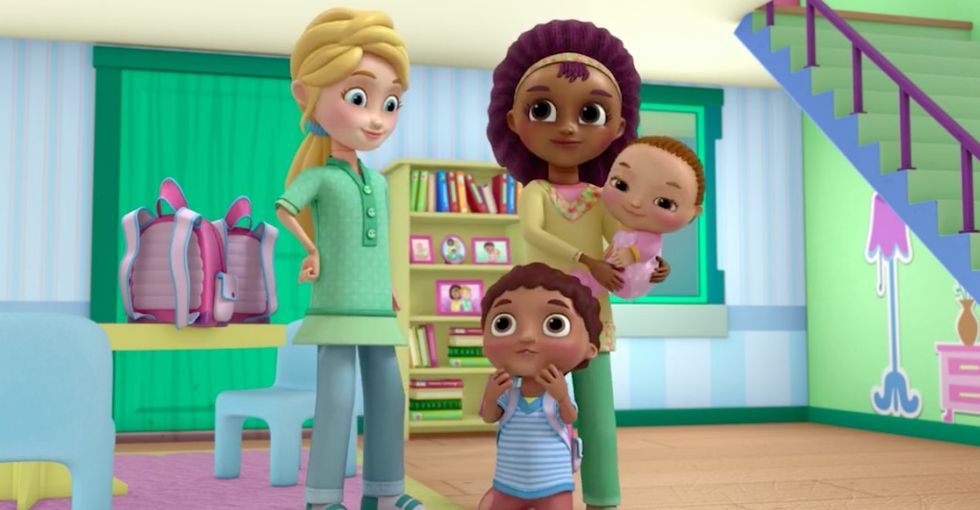 For the first time ever, Amanda Deibert's daughter saw something fantastic while watching Saturday morning cartoons:

Deibert, a Los Angeles-based writer, was just one of many parents reacting with excitement to a new episode of Disney's "Doc McStuffins" that featured an interracial family with two moms.

In the episode, the family lives through a scary earthquake and learns the importance of having a safety plan in case of emergencies. But it's the series' decision to feature a same-gender couple — voiced by actors Portia de Rossi and Wanda Sykes, who are both lesbians — that's actually groundbreaking.

“The diversity of the show and having an African-American little girl be the star of the show — and also being a doctor — it sends a great message,” Sykes explained in a video by GLAAD about her involvement.

“I am a fan of Doc McStuffins," Sykes said. "My kids, they watch the show. With this episode, they see a family that looks like our family."

The inclusive episode comes amid growing demands for better LGBTQ representation across the TV landscape.

During a Television Critics Association press tour, GLAAD broke down troubling trends among queer representation on TV; among the most concerning issues was the need to feature more LGBTQ characters who are women and people of color. The latest "Doc McStuffins" episode helps in changing that status quo.

Not everyone is excited about the episode.

In response to Sykes and de Rossi's characters, conservative advocacy group One Million Moms urged supporters to email and call Disney demanding the "Doc McStuffins" episode never be seen by the public.

"If producers air this episode as originally planned, then conservative families will have no choice but to no longer watch Disney Channel Network in their homes so they can avoid previews, commercials, and reruns," the group threatened.

But Disney aired the episode anyway. And many people stood by its side.

The hashtag #StandWithDoc cropped up on Twitter in response to the backlash.

People from across the internet sent encouraging messages to Disney and the thousands of families who will be positively affected by the episode.

@Disney Don't give into the intolerance of bigoted mm. Your show is amazing! Keep the inclusion going! #StandWithDoc
— Mandy Siegfried (@Mandy Siegfried)1501785680.0

The outpouring of support and Disney's decision to follow through with the episode reflects society's growing acceptance of LGBTQ people and parents. To countless little kids watching in family rooms across the country, it makes a difference.

"We’re two moms, and we have a boy and girl, two kids," Sykes said. "It’s going to be very exciting for them to see that — to see our family represented.”

Get a behind-the-scenes look at the episode in this video by GLAAD:

See how Disney and Wanda Sykes are teaching families two valuable lessons in one episode of Doc McStuffins.