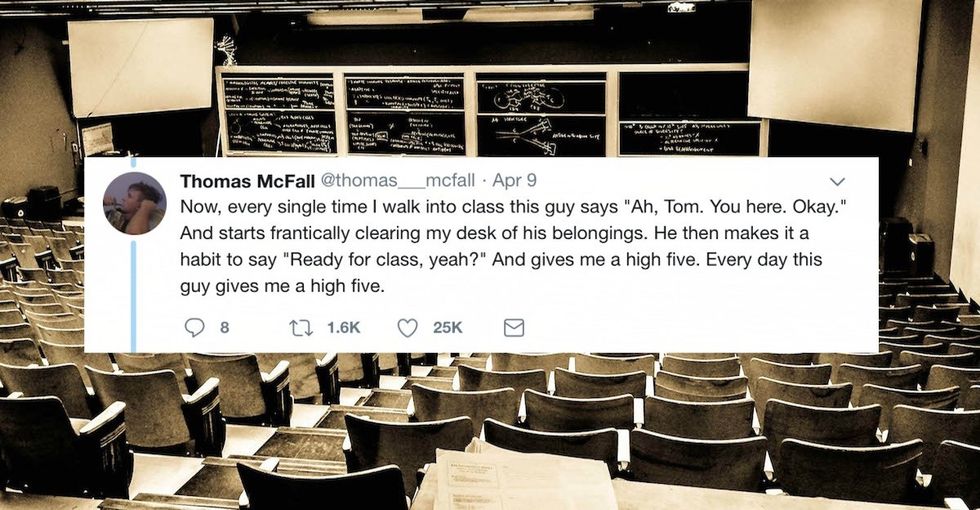 All you want to do was walk in, sit down, get out your notebook and (try to) pay attention. But now? Now you've got to talk to a stranger about moving their stuff and there goes your day, already bogged down with petty annoyances.

Sound familiar? It should.

We've all got so much to do these days that interacting with people we see every day — not our friends, but our classmates, fellow commuters, co-workers, the people in line for coffee with us every day — can feel like a burden.

So, when these people do something we perceive as annoying, like putting their stuff on our desks, we don't have the time or the energy to assume their intentions or think about the lives they're leading.

But if we stepped out of ourselves for a second, we might just realize that we're all much more connected than we think, that our preconceived notions of others are usually just that — preconceived. And, often, inaccurate.

That's why this Twitter story about a guy who learned an important life lesson from a classmate he was frustrated with is going viral.

It's the perfect example of that "don't judge a book by its cover" adage we should have all learned in preschool but sometimes forget. And it starts the exact same way as this post — with a college student groaning on the inside as he sees someone's stuff on his desk.

Hey guys, I know I usually just post shitty jokes on my Twitter but bear with me because I wanted to share somethin… https://t.co/akgh4o7wNy
— Thomas McFall (@Thomas McFall)1523280148.0

As I'm standing there on my phone another guy who was also late walks into the class before me and tried to take my… https://t.co/IfLRfNyPBi
— Thomas McFall (@Thomas McFall)1523280149.0

It was then that I realized this guy wasn't putting stuff on my seat to annoy me. He was saving me the seat every m… https://t.co/D6KzZecdqQ
— Thomas McFall (@Thomas McFall)1523280150.0

The guy moved here from the Middle East to pursue a college education in America. He plans to go back after he gets… https://t.co/IUpWCCLtwN
— Thomas McFall (@Thomas McFall)1523280151.0

Moral of the story? Don't do what I do and constantly only think about yourself. It took me nearly the entire semes… https://t.co/z8gYObep25
— Thomas McFall (@Thomas McFall)1523280151.0

If not for this one day running late, McFall may have never realized what his classmate was trying to do. And he may have continued to think of him as annoying, maybe telling others about "the weird guy who was always trying to take up my space"... when all the guy was really trying to do was be kind.

We all misinterpret the actions of others sometimes. It's easy to do that!

But if there's one thing this story reminds us, it's that it's important to stop and remember that while you're living your life, other people are living theirs, so assuming best intentions can do us a great favor.

That's why we should step outside of our bubbles and engage with the world on a regular basis.

You could make a new friend. You might brighten someone's day.

But most importantly, getting out of your own head, checking your own biases, and giving others the benefit of the doubt will make you a more compassionate person.

You don't have to engage with everyone you meet, but the next time someone smiles and offers you a high-five?

Maybe just take them up on it.