Try not to tear up reading this fan letter from a Mexican-American about 'Coco.' 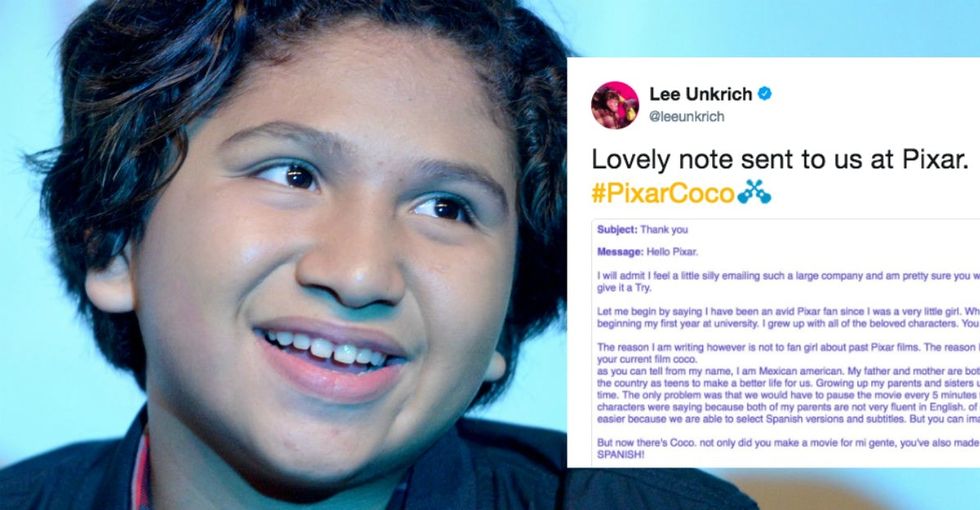 The animated movie follows Miguel Rivera, a guitar-playing 12-year-old who accidentally winds up in the land of the dead — an otherworldly dimension based on the Mexican holiday, Día de los Muertos (Day of the Dead).

Since its release on Nov. 22, "Coco" has raked in over $100 million domestically in ticket sales and has garnered rave reviews from critics.

But it's arguably the personal connection many fans have had to the characters and their story that's truly made this film special.

On Nov. 29, "Coco" director Lee Unkrich tweeted an email that was sent to Pixar from a woman who'd seen the film.

"I will admit, I feel a little silly emailing such a large company and am pretty sure you won't even read this," her note began. "But I figured I'd give it a try."

The woman, the daughter of Mexican immigrants, explained why the movie meant so much to her:

Growing up, my parents and sisters used to watch Pixar movies all the time. The only problem was that we would have to pause the movie every 5 minutes to explain to my parents what the characters were saying because both of my parents are not very fluent in English. Of course nowadays it is much easier because we are able to select Spanish versions and subtitles. But you can imagine the difficulty in the 90s!

"But now there's 'Coco,'" the woman continued in her letter. "Not only did you make a movie for mi gente, you've also made it viewable in THEATERS in SPANISH!"

"Coco," as she noted, was released in Spanish in many theaters across the country, including in over two dozen cinemas in Southern California alone.

‌Actor Anthony Gonzalez, who is the voice of Miguel in "Coco." Photo by Vivien Killilea/Getty Images for Vulture Festival.‌

"Let me explain why this means so much," she continued. "To me, last night, for the first time in my life, I took my mom to the movies. We went to the movies like real Americans do!"

"My mother had tears in her eyes. She hadn't been to a movie theater in over 30 years. She has always felt a bit out of place in the States. But last night, she forgot she was not from here. She felt at home. And of course the movie made us cry too!"

Fans of the film, many of whom could relate to the woman's story, filled the tweet replies with heartwarming messages.

"It was my mom's first time in a movie theater in over 15 years as well," tweeted another.

@leeunkrich As someone that is married to a Mexican American, this movie brought our entire family together. My chi… https://t.co/v7H7g1iiGB
— Eric Rodriguez (@Eric Rodriguez)1512157796.0

@leeunkrich This film gave me nostalgic feels, I felt like a film finally represented me and my culture. #PixarCoco… https://t.co/NsCnwifyU8
— jen (@jen)1512192161.0

"I felt this movie in my soul," shared another fan.

Diversity in film matters in real-world ways. From the actors and directors bringing the movies to life, to the languages and cultural narratives they tell on screen, "Coco" shows how feeling as though the story reflects you and your story can make a world of difference.

"I apologize for getting so emotional," the woman concluded her letter. "But I want to say, from the bottom of my heart, and from all Mexican-Americans, thank you. Thank you for including us. Thank you for making my mommy feel like she belongs. Thank you."