Those controversial tests your child is about to take in school? You can opt them out.

There is a lot of debate about Common Core and how it's been implemented. 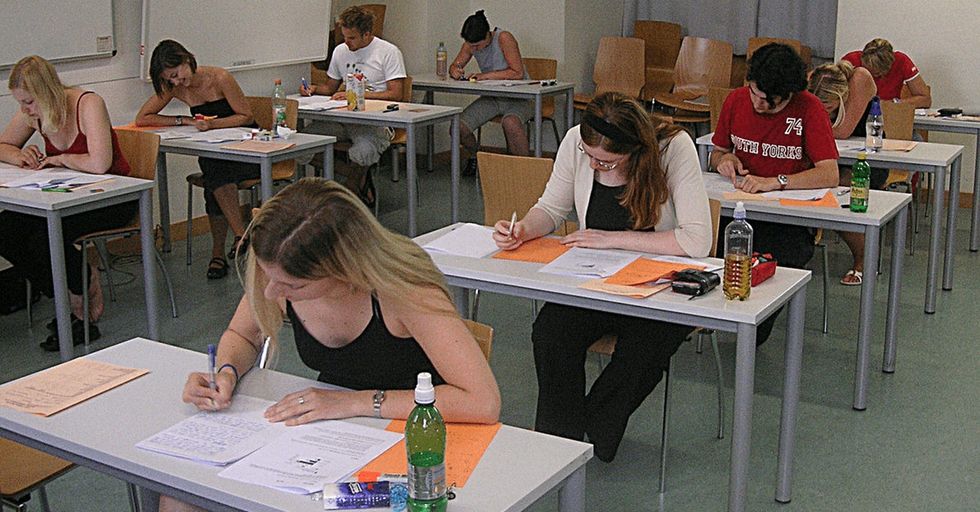 The time has come, my friends, for Common Core testing. You may have heard of it. It's made numerous news segments recently because not only is Common Core controversial, but loads of parents and kids are actually choosing to NOT take the tests (which are happening now-ish). The refusals are happening in nearly every state that's adopted Common Core tests, but one of the biggest opt-out states so far has been New York.

Before we go into that, you'll need some good starting information about Common Core. With so much confusion, a lot of parents just don't know where to start. There are many links throughout this piece that you can follow to help get you up to speed. And there's a video at the end if you don't feel like reading, but the breakdown here is a good place to start.

What Common Core is:

The idea is to have a national set of standards, or a "common core," for students to meet before college admission. Before this set of standards it was up to each state, and colleges were getting kids who all graduated high school but had completely different proficiency levels in reading and math.

It's easy to see why a national standard appeals to people. It helps to develop college curriculums that make our upcoming workforce and talent competitive with the workforce and talent of other countries by ensuring that college-track kids get to about the same place by the end of high school.

Here's what Common Core is not:

It's not a specific curriculum. How districts choose curriculums to get kids to the established benchmarks of proficiency is their choice. While that's good in a way, it's also been confusing for districts because the tests have been enacted before the schools had sufficient time to research and implement new curriculums. Some districts have even been preyed upon by for-profit companies claiming to sell curriculum packages (textbooks and workbooks) already aligned with Common Core, which are actually about the same as previous textbooks, but with a “Common Core approved" sticker slapped on.

Here's why some people are super into Common Core:

Common Core has been touted as a better way to:

Why some people are really against Common Core:

In terms of how Common Core actually shapes up in the classroom, there are a lot of valid concerns. Interestingly, the criticisms come from progressives and conservatives alike. Here are some common themes.

"I have come to the conclusion that the Common Core standards effort is fundamentally flawed by the process with which they have been foisted upon the nation."

That's a boiled down version of the basics of the Common Core debate. And here's where it leaves us.

What is clear is that it's crucial to figure out a healthy way to challenge every child to their true potential and to remain competitive with students from other countries.

What is less clear is whether Common Core is the right vehicle to get us there.

If you like Common Core and think the testing that goes with it should move ahead, there's good news for you. It is being implemented across most of the country this year. It is here and it is happening.

But what's a parent with concerns (or flat-out objections) to do?

It turns out, there's an option for them, too.

It's called the United Opt Out movement, and it's growing in popularity.

It's pretty much a huge wave of parents across the country — stronger in some of the 43 states enacting this testing than others — that is telling the schools that their children are not going to be taking the tests. New York parents have gotten the movement started, and in Long Island, 65,000 of approximately 144,000 students opted out of the tests as of April 2015. The bet here is that if state departments of education can't get enough compliance with the tests, eventually states will revise their tactic and choose another way.

As with any serious decision involving education, there are some pros and cons to making this choice, but it's good to know that parents and students actually have an option.

If opting out of Common Core testing may be the right choice for your family, take some time to find out your state's stance on it.

You can do that by checking out the opt-out guides and choosing your state from the drop-down menu.

In some cases, it's as simple as sending a letter to your child's school.

And if you do take that route, you're not alone. Check out this video that covers some of the protests happening:

There's a lot to consider here, but the the best place to begin is with information. It might prove helpful to show this to other parents you know and see what they've been thinking about this. It's our nations' kids' education for the next ... really long time, potentially. It's kind of a big deal.