This mom is making her sick 6-year-old smile — with an elephant's behind. 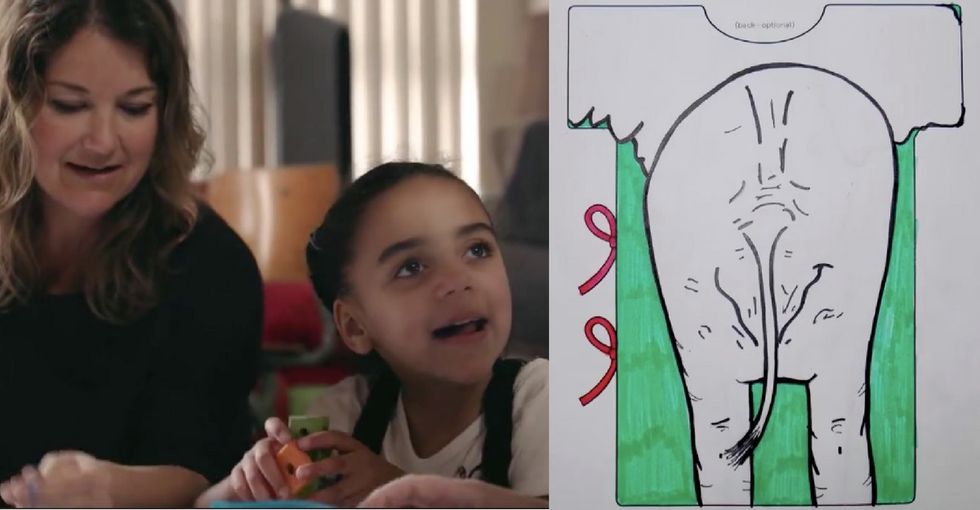 Kim’s daughter Violet is a 1 in a million kid — literally.

The 6-year-old has not one, but three incredibly rare neurological diseases.

The diseases affect Violet's ability to do basic things most of us take for granted. “They describe it as having cerebral palsy, autism, ADHD, epilepsy, and Parkinson’s all wrapped up into one disorder,” Kim says.

Violet works with a physical therapist and occupational therapist to help her walk and eat and even breathe. Yet, she's one of the happiest and sweetest kids you'll ever meet.

“She loves to go to the grocery store,” Kim says, “because then she can say ‘Hi’ to everybody and ‘I love you.’”

People often say “I love you” back, which makes Violet happy and warms her mother's heart.

The proud mom wanted to do something to make Violet’s hospital visits more enjoyable.

She's one in a million. ❤️ (via Starlight Children's Foundation)

The Starlight Foundation, co-founded by Steven Spielberg, aims to “bring joy and comfort to hospitalized kids and their families.” And they do that through programs like Design-a-Gown.

Hospital gowns are notoriously awful. For one, they’re embarrassing, opening in the back so patients’ rear-ends are exposed. And two, they’re sooooo bland.

No one wants to see a kid dressed in a sterile-looking hospital gown — and what kid would want to wear one?

Starlight created a gown that ties up the side, not the back — a simple fix for the butt-baring problem. Then they asked people to send designs to make the gowns fun — something kids would actually want to wear.

Kim says she wanted her gown design to bring Violet some laughter.

Kim’s design features an elephant holding a rainbow lollipop on the front, and the same elephant's backside on the back.

The clever-but-subtle allusion to traditional, butt-showing hospital gowns aside, Kim says, “I wanted something that would make my daughter laugh. And what’s more amusing than a little elephant butt?”

Starlight received more than 6,000 gown design entries along with stories from kids and families. Some celebrities, including Martha Stewart and “Weird” Al Yankovic, even took part in the contest.

Kim’s design was one of three finalists.

The winning design will be made into gowns for kids at Starlight’s network of more than 700 hospitals and community health partners. Donors can provide a gown to a kid by donating $25 to the foundation.

What a fun way to help kids who have no choice but to spend time in hospitals. Anything that makes a sick child like Violet happier is a winner in my book.

Note: Nope, we weren't paid to promote The Starlight Foundation — we'd tell you! We just think this is a great story about what they're doing to make the world a bit better.