This lovestruck 99-year-old walks 6 miles every day to visit his wife. 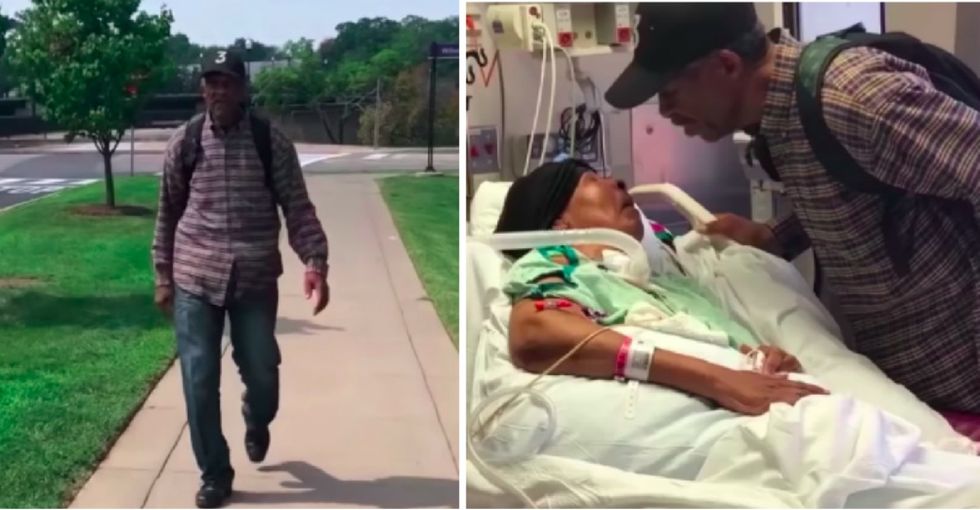 Luther Younger is a testament to the power of true love.

Luther’s wife Waverlee was diagnosed with a brain tumor several years ago and occasionally spends time at the local hospital receiving treatment.

While she’s away, Luther walks three miles each way from their home in Rochester, New York to spend time with her.

"I got a wife. I don't want to wait on the bus. I want to go up there to see my wife," he said during an interview.

A former Marine and Vietnam veteran, Luther says he often turns down rides to and from the hospital, much to the chagrin of his other family members. But that determination has made him into a viral sensation.

"She's the best cup of tea I ever had," he said of his wife. "She would come in and kiss me and say baby and feed me in the bed and this is what I need right here."

His daughter created a GoFundMe campaign to help pay for her mother’s medical bills -- and to pay for occasional rides home for her dad -- even if he’s unlikely to take her up on that offer.

"People tell me to act my age — yeah, right. They're jealous because I don't drink, I don't smoke, because it's no good. I wouldn't be here [if I did]," he told CBS in an interview.

His daughter Lutheta said her parents have moved in with her and the family so they can help take care of them. And while she's asking for financial help for her mother's medical bills, her dad's unusual determination is not one of necessity.

It’s amazing for anyone at age 99 to be alive, let alone walking that kind of distance every day. But in her story on Luther, reporter Caitlin O’Kane offered some insights into Luther’s truly unique style:

He dropped to the floor and started doing perfect pushups. Then he popped up, slung a backpack over his shoulder and said, "Let's go." He told me his daughter thinks he's too hyper, and acknowledged that he probably is.

He warned me I would have to keep up with him, and I was sure that I could. I wasn't prepared for a man in his 90s to start running, but he did — several times. I started running behind him, trying to keep up as he led the way through the suburban streets.

A few days after the story ran, Luther’s daughter reported that her mom had once again returned home from the hospital.

She still reportedly has sizable medical bills to pay, though there has been a surge of support through her crowdfunding campaign.

In the meantime, maybe her dad can slow down a bit and catch his breath, but we wouldn’t bet on it.