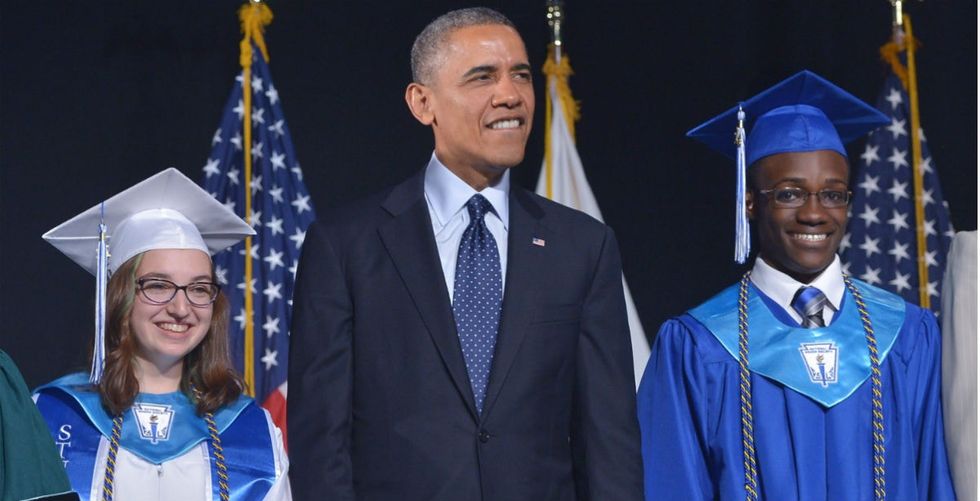 A high school valedictorian played a joke on his classmates that revealed a larger truth about the implicit biases we can all experience.

Like most valedictorians, Ben Bowling said he wanted to share something inspiring with his classmates. So he offered up the following quote, which he attributed to Donald Trump: "Don't just get involved. Fight for your seat at the table. Better yet, fight for a seat at the head of the table."

The crowd of students, family, and friends reportedly erupted into applause.

Then Bowling revealed a twist about the quote: "Just kidding. That was Barack Obama."

This valedictorian read a Trump quote during his graduation speech and the crowd erupted with applause. Then he int… https://t.co/YfDYjRbdNe
— CBS News (@CBS News)1528139675.0

It was a funny moment, but the audience response was telling.

Bowling says he was just making a harmless joke. However, the loud applause he initially received became much more muted when he correctly attributed it to Obama.

"I just thought it was a really good quote," he said. "Most people wouldn't like it if I used it, so I thought I'd use Donald Trump's name."

To some people that might seem like a stinging rebuke to political bias from conservatives. But the truth is, there are plenty of examples of people across the political spectrum making the same mistake.

These moments of bias are not limited to one group or one political party.

For instance, in May, several progressive political influencers on Twitter posted an image of a child being detained by border officials and placed the blame squarely on Trump. But the photo had been taken in 2014, when Obama was president.

Some people deleted the tweet while others doubled down saying they were still right even if they were technically wrong. Unfortunately, that enabled partisans on the other side, including Trump himself, to deflect from the real issue and instead turn it into a "gotcha" moment.

It was awkward, but the main takeaway of these kinds of situations is that things are often complex. And when we let our partisan instincts take over, we can lose sight of the actual issue.

Unconscious bias is a real thing, and it can affect all of us.

It affects how people view others in terms of race, gender, sexuality, age, ability, class, and more — even if we're not aware of it. Becoming more aware of our own biases can help us look at each other and the world in more honest and constructive ways.

Even if in this instance Bowling was making a lighthearted joke, he ended up revealing a larger truth about how people filter reality through their own embedded biases.

It might be uncomfortable to realize how we can selectively see the truth of the world around us, but getting to know — and hopefully work past — our own prejudices is an educational opportunity worth getting schooled on.