This designer uses role models instead of runway models in her fashion shows. The result is magical.

These women are changing the face of fashion — one runway step at a time. 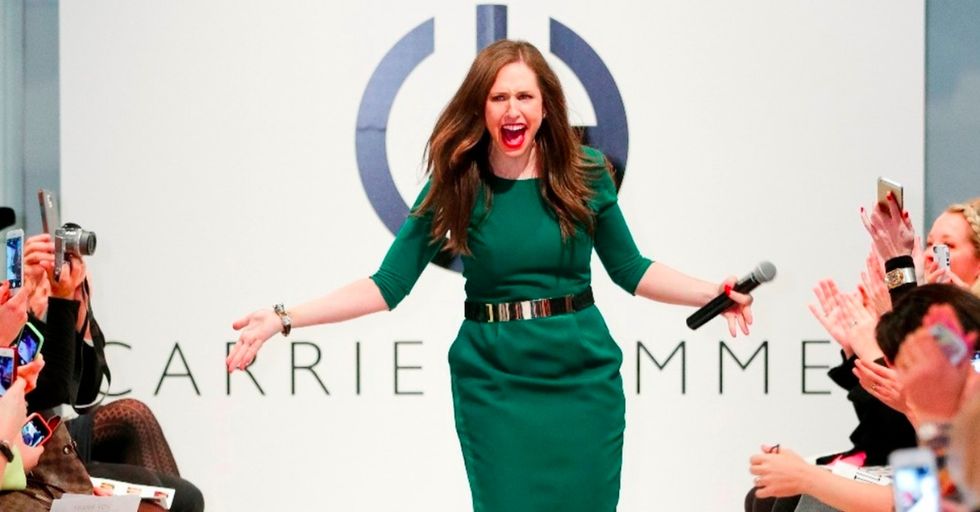 What do you expect to see when you're sitting front-row at a fashion show?

I envisioned Anna Wintour and other fashion bigwigs stoically watching models walking down the runway. I was wrong.

I can tell she's not thrilled. Or maybe she is. WHO KNOWS? GIF via "60 Minutes."

This year, there was a show at New York Fashion Week that totally blew it out of the water. And the crowd? We reacted like this:

"What is this alternative fashion universe you speak of?" you ask.

Well, it certainly isn't your momma's fashion show. Are you ready?

Buckle your seatbelts. You're going to be blown away.

Meet Carrie Hammer. At a time when model diversity in the industry is still painfully absent, this designer is revolutionizing fashion and celebrating diversity in a serious way.

Carrie Hammer takes the runway after a successful show.

A few years ago, Hammer noticed there was a lack of options for fashionable yet professional women's clothes. So, she started her own line designed to make women feel good — inside and out.

Not only does she create amazing designs, but this year's fashion show felt like a party and a revolution to celebrate "role models not runway models."

Yep. That's right. Hammer doesn't use traditional models for her shows. Instead, she focuses on role models. As she explained to Upworthy:

"They embody what it means to be a positive, powerful woman. They make the clothes come alive. That's why I make these clothes — to make women feel incredible and empowered. And what better women than the women I'm making these clothes for to model them?" — Carrie Hammer

The women she chose to walk her runway transcend race, disability, and body types — they're a reflection of the people we see everyday, including ourselves. At a time when diversity in the fashion world is still severely lacking, Carrie Hammer's work is a breath of fresh air. And her shows provide a glimpse of what the future might look like if we truly celebrated differences in fashion.

Here are just a few of the amazing women who helped Carrie Hammer lead a runway revolution, one stiletto step at a time:

"I wanted to [walk in the show] because I actually want to see people on the catwalk who look like me. Whenever I see fashion shows, I think, 'Oh those clothes are nice. I can never wear them.' So I thought, 'You know what? It might be nice to get over my fears and actually be a normal-sized woman with lumps and all on the catwalk.' And maybe someone will be like, 'Oh my god! That's fantastic!'" — La Neice Collins

After spending years working for media outlets like NBC, NPR, and CNN, Collins took her producing, writing, and editing skills to the United Nations to make an even bigger impact. Now, she's using her expertise to help women and girls who are subjected to sexual violence in conflict.

"Fashion to me means individuality. It's being happy with what you have on — whatever that is. Expressing yourself in whatever way makes you feel the most satisfied with your person, I think that's fashionable." — Tolu Olubunmi

You don't have to adjust your screen — that is a photo of Olubumni with President Obama behind her. She's a Nigerian-born activist who has used her experience and public policy expertise to push for immigration reform, including the passage of the DREAM Act. Her social entrepreneurship was recognized by the World Economic Forum, which named her one of 15 women changing the world in 2015.

"My favorite part [of being in the show] was meeting so many women! These women are boss! Bad. Ass. And the fact that I got to be around so many badass women was ah-mazing."— Rakia Reynolds

Reynolds is a Philadelphia-based public relations guru who has brought her talents to places like MTV, TLC, and Discovery Health. Her work's been so great that, in 2012, she was recognized on Dell's Inspire 100 list of world-changers. Check out her entrepreneurial journey on the White House blog and read her full bio on her company's site.

"I have a really weird relationship with fashion because I mostly wear gym suits since I'm from New Jersey. I learned a lot about fashion this week because I learned that a dress can change how you feel and how you look. I never thought a dress could be that transformational, but it was." — Maysoon Zayid

Zayid is another woman kicking butt in so many realms. In addition to her acting and writing experience, she is an outspoken activist for people with disabilities and Palestinian rights. If she looks familiar, it may be because Maysoon's TEDWomen talk was the site's most popular in 2014, raking in over 7 million views. Read more about her and her work on her website.

Hammer's movement is already having a ripple effect. Other designers are diversifying their models, too.

Check out the full listing of this year's models and check out the fashion revolution on Twitter and Instagram: #RoleModelsNotRunwayModels.