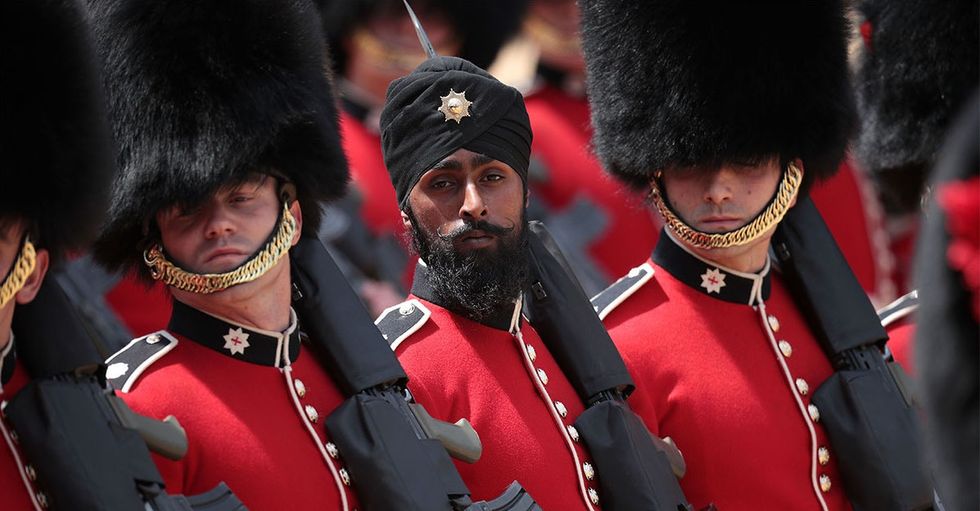 With style, swagger, and an incredibly dapper look, Indian-born British guardsman Charanpreet Singh Lall became the first soldier to don a turban during the Trooping the Colour parade.

Trooping the Colour is a celebration that has commemorated sovereign birthdays for more than 250 years. It also functions as a display of military drills, music, and horsemanship. Marching alongside his colleagues who were wearing their well-known bearskin hats (ceremonial military caps that date back to the 17th century) Lall proudly wore one of the most visible representations of his religion while showing his pride for his country.

"Being the first turban-wearing Sikh to troop the colour and to be part of the escort it is a really high honour for myself, and hopefully for everyone else as well," Lall told BBC.

Originally from Punjab, India, Lall's family moved to the U.K. when he was just a baby. Living in Leicester for most of his life, the 22-year-old joined the British army in 2016, and has worked to bring representation and important changes to one of the country's most traditional industries.

By highlighting his religion, Lall is not only making history, he's making representation matter in the U.K.

"I hope that more people like me, not just Sikhs but from other religions and different backgrounds, that they will be encouraged to join the Army," Lall said.

Known for its commitment to traditionalism and European heritage, Britain isn't exactly expected to budge on certain traditions. But people like Lall are changing that. As the country welcomes one of its first black duchesses, Lall joins a changing British landscape that prominently shows people of all ethnicities, genders, and religions in important, respected roles. It's a remarkable, long overdue change that can create space for other British citizens who want to do good things in their country, while also respecting their culture and beliefs.

"I hope that people watching ... will just acknowledge it and that they will look at it as a new change in history," he said. "I'm quite proud and I know that a lot of other people are proud of me as well,"

People are definitely watching, and they're incredibly proud.