There was a 'panda kindergarten' event in China. It didn't disappoint.

2015 has been the year of the baby giant panda. 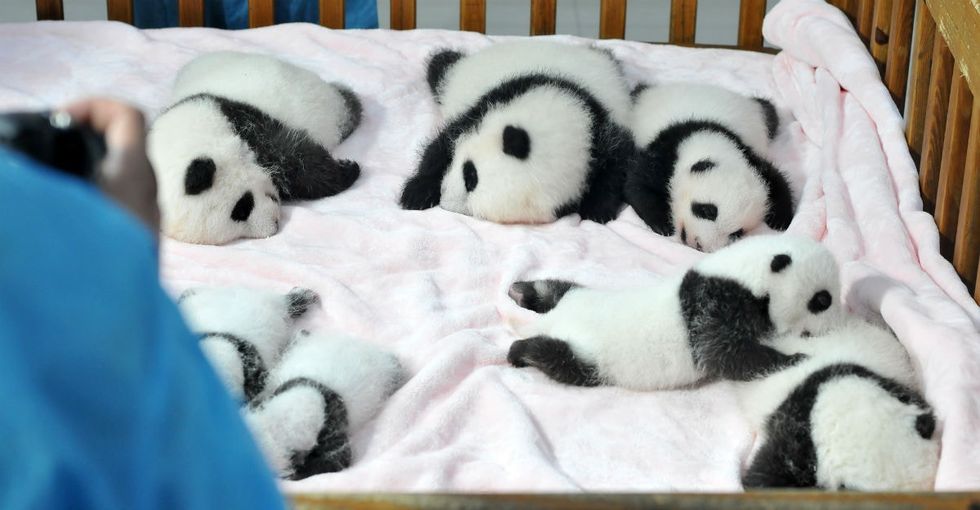 It was back-to-school for the fuzziest, cuddliest, most adorable creatures on earth this past weekend.

On Oct. 24, 2015, baby giant pandas were presented to the public as part of Chengdu Research Base's opening ceremonies for "panda kindergarten" this year in China.

And yes, it was as cute as it sounds.

Unfortunately, there weren't any scrapbook-worthy pics of the cubs putting on backpacks and hopping on school buses (can you imagine, though?). That's because the research base uses the term "kindergarten" a little loosely — it's not so much a school as it is the area where the smallest fur-balls are cared for, play with their peers, and just generally act too-cute to handle.

This year's ceremony was particularly awesome because 2015 has been downright phenomenal for giant pandas.

In front of excited onlookers, 13 of the 15 giant panda cubs born at the center this year strutted their stuff for the camera (or, you know, just rolled around on the table being delightful). That number may not seem significant, but it marks a very successful breeding year for the species.

Because females only ovulate for a very short time once a year, reproduction rates can be painfully stagnant for giant pandas. As the Smithsonian's National Zoo points out, "the giant pandas' naturally slow breeding rate prevents a population from recovering quickly from illegal hunting, habitat loss, and other human-related causes of mortality."

So all things considered, 15 makes for a pretty stellar year.

Remarkably, there were six — six! — sets of twins in the mix this year, too. And two of them were named image ambassadors by the United Nations Development Program, which helped organize the event to bring awareness to the species' fragility around the world.

Overall, things are looking up for these fuzz-balls.

Giant pandas are endangered, with only about 1,864 alive in the wild in 2014, according to the World Wildlife Fund. That figure, however, is fairly encouraging — it's up from around 1,000 in the 1970s. In the past decade alone, wild giant panda numbers have ticked up 17%.

Here's some recent photographic evidence of a bump in the captive population too (and not at all an excuse to look at more baby pandas being baby pandas...):

Make no mistake, though — we can't get complacent when it comes to protecting these creatures.

Like I mentioned, giant pandas are endangered, which means they're still facing a very high risk of extinction in the wild. It's important that their populations continue to grow (and not just because they're cute) — pandas play a vital role in keeping China's bamboo forests alive and thriving, which, in turn, affects many other species.

Here's to hoping each year brings an even bigger incoming class of panda kindergarteners (and always making sure our cameras are out and ready for the first day of school).