The weird, secret history of the electric car and why it disappeared. 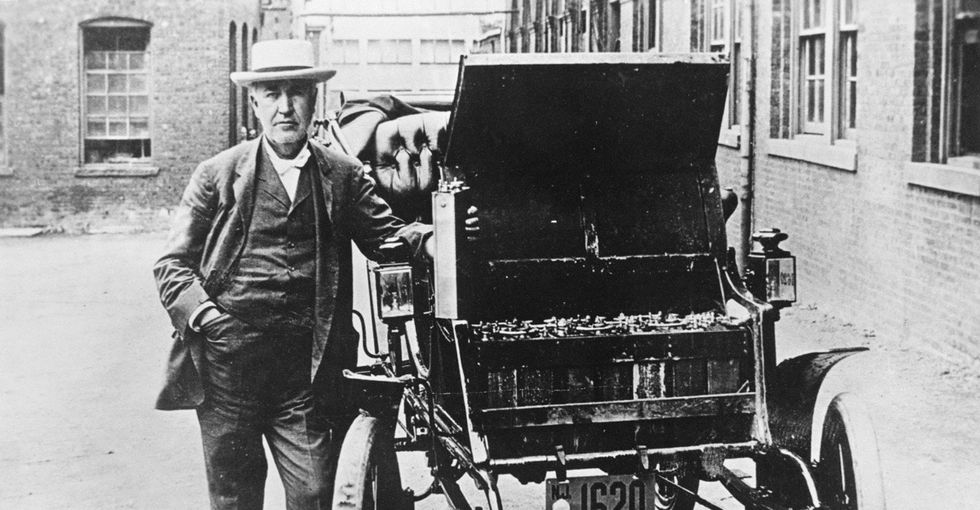 Did you know the very first Porsche ever designed was electric?

Ferdinand Porsche might have founded his famous car company in 1948, but he designed his very first car all the way back in 1898, when he was just 22 years old.

Imagine this chassis with two racks of seats on top and you'll see Porsche's vision. Image from Porsche.

Officially the 1898 Egger-Lohner electric vehicle, C.2 Phaeton, Porsche's first car is more affectionately known as the P1. Incredibly, it didn't need a single drop of gas — the P1 was powered by a small electric motor.

Yep, that's right. It was an electric car.

So yeah, electric cars are actually super old. Like, as old as cars themselves.

An electric car in England, 1896. Photo from Hulton Archive/Getty Images.

The first practical electric car was invented in 1884, back when we as humans were still, you know, figuring out what the heck a car was.

In fact, by 1900, more than a third of all vehicles on the road were electric. (Gas-powered cars made up just 22%, and the rest were steam-powered.)

Just like today's electric cars, the electric cars of a century ago had some major advantages over early gas-powered vehicles.

Early gas cars were clunky, loud, and dirty. Worse, drivers had to physically wrestle with the car to get it to move — every gear shift or hand-cranked start-up involved essentially arm-wrestling an ornery, hateful robot.

Electric cars, on the other hand, were easy to start, easy to drive, and quiet. They weren't exactly fast or long-range vehicles (they only went about 20 miles an hour), but this wasn't a problem in cities, where cars were primarily used. Plus the roads outside the city were pretty bad, and no one wanted to drive out there anyway.

These early electric cars had some major fans, too. The famous entrepreneur Thomas Edison backed electric cars, and even Henry Ford explored them as an option.

If electric cars had so many great benefits, why didn't they catch on? What went wrong?

Today, Texas is known for its gigantic crude oil production — but back around the turn of the century, we were just really starting to drill, baby, drill. Then, on Jan. 10, 1901, the Lucas No. 1 well in Spindletop blew its top, dramatically ushering in an era of cheap, readily available gasoline for America.

In 1908, Henry Ford dealt a second blow to electric cars when he unveiled the gas-powered Ford Model T.

Largely thanks to Ford's use of an assembly line, the Model T was much cheaper than any other cars out there, costing only about a third as much as a comparable electric car.

A later model of the super-cheap Model T, the Model T Couplet, way back in 1914. Photo by Hulton Archive/Getty Images.

Plus, with the advent of the highway system, people wanted fast, cheap, powerful cars that they could use anywhere.

It's hard to imagine now, but at the time we also just didn't have the infrastructure to support electric cars. Today, you can get electricity pretty much anywhere. Before 1910, however, a lot of urban homes weren't wired for electricity, meaning people couldn't charge their cars at home. And electric cars certainly weren't an option for anyone living in a rural area where electricity wasn't even a thing.

Weirdly, sexism may have also played a role in the success of gas-guzzlers.

Electric cars were cleaner and easier to operate, and were therefore often marketed specifically toward women — gaining a reputation as being a woman's car.

I wish I were joking. Image from Rmherman/Wikimedia Commons.

This may have scared men away from purchasing them, driving them to buy gasoline-powered cars and, ugh, history, really?

Anyway, between weird marketing stigmatization, the low cost of crude oil, the much more affordable Model T, and the introduction of the highway system, by the 1930s, electric cars were pretty much gone.

Today, though, the advantages to electric cars are largely the same — and a lot of the disadvantages are a thing of the past.

Electric cars of today are still cleaner and quieter than gasoline-powered vehicles, and we're quickly solving a lot of the issues like cost and driving range.

Electric cars have historically been more expensive, but both Tesla and Chevy have announced they'll be producing electric cars in the actually-kind-of-affordable $30,000 range. Plus we've learned that while gasoline has been cheap, our exuberance for burning it and other fossil fuels has been writing the entire planet a massive bill — to the tune of over $1.9 trillion a year by 2100.

That just leaves infrastructure for charging electric cars, which, it turns out, has been growing up right under our noses.

We're still lacking a lot of the infrastructure we'll need to make electric cars truly ubiquitous, but it's slowly starting to appear.

Tesla has been building a gigantic network of Superchargers, and ChargePoint claims to have more than 28,000 chargers ready for public use. Many non-car-related businesses like Walgreens are starting to provide charging stations in order to entice customers as well.

There are even services that let people with charging points at their homes rent them out to other electric car owners. One company, Fisker, even had an idea for a hybrid car that could charge via solar panels on the roof, meaning even needing to find a charging station may one day be a thing of the past.

To bring this story full circle, guess who's getting back into the electric car game?

A rendering of the Porsche Mission E concept car. Image from Porsche.

118 years after Ferdinand Porsche designed the P1, Porsche announced an electric car of its own: the Mission E. Originally just a concept car, Porsche has finally decided to put it into production.

Electric cars aren't a new fad — they're intimately tied to the very history of automobiles.

While there are some things they'll never do quite as well as gas-powered cars — like revving your engine before a big race — it's awesome to see that we might finally be entering an era where gas and electric cars are sharing the road again.