The reaction to a soldier and his boyfriend at a military prom shows how far we've come. 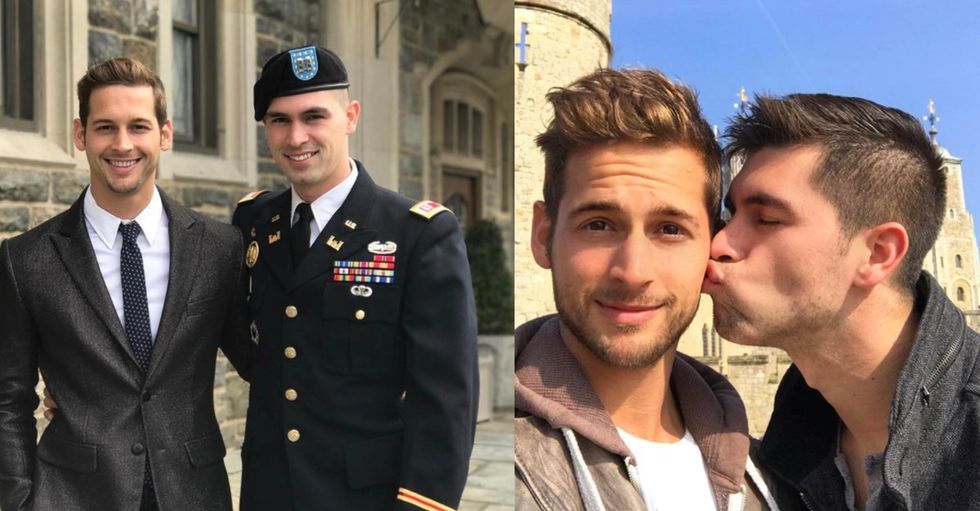 Andres Camilo, a National Guardsman, recently came out as gay to the entire world.

In June 2016, he made a quick (and quite adorable) appearance in a YouTube video created by his boyfriend, model and filmmaker Max Emerson, where he proudly announced:

"I guess with this video, I'm coming out to the military."

That's Camilo on the right. GIF via Max Emerson/YouTube.

Shortly after, Camilo was promoted to captain — with Emerson by his side.

It was an immensely proud moment for the couple on many levels.

"When I joined the Army 11 years ago and the "Don't Ask, Don't Tell" policy was in full effect, I was constantly hiding who I was for fear of losing my career. I would have never expected that my soldiers and the man I love would be in the same room cheering to my career."

Last night, my boyfriend was part of my promotion to Captain. When I joined the Army 11 years ago and the "Don't Ask,...

The next step for the couple, as in all serious relationships: going to prom together.

Specifically, a gala held by the organization Knights Out, which embraces and supports LGBT soldiers.

My date is the best! #GayArmyProm

The photos of the beaming couple at the ball went viral and inspired an outpouring of love and support from commenters.

If it seems weird to be celebrating something as simple as two gay men attending a function together, just think — it wouldn't have been possible even six years ago.

As recently as 2011, openly gay men and women were unable to serve in the U.S. armed forces. The official policy, "Dont Ask, Don't Tell," meant superiors weren't supposed to actively seek out or investigate anyone's sexual orientation, but coming out of the closet was out of the question.

After the policy was repealed, a slew of soldiers, including high-ranking officers, were finally able to come out after years of hiding.

If the reaction to Camilo's posts shows anything, it's that all members of the military — gay, straight, or otherwise — have our support.

Camilo's willingness to continue sharing his relationship on social media indicates his brothers and sisters in the armed forces are likely accepting of his lifestyle and proud to serve alongside him.

It may seem like a minor victory now, but the battle for equality in the armed forces has been a long, hard-fought battle.