The original Gerber baby met the newest, and the moment was magical. 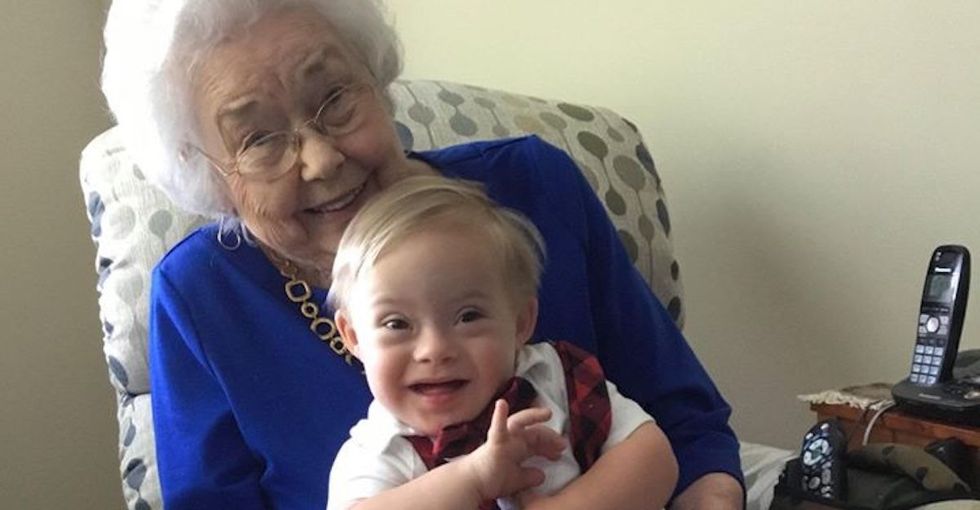 You know the Gerber baby, right?

She's an American icon. And if you've ever wandered down the baby food aisle of the grocery store or checked out the pantry of a new parent, you've definitely seen her adorable face peering at you from the label of a tiny jar.

That baby was 91 years old in the early part of 2018. Her name is Ann Turner Cook, and aside from being a teacher and writer of mysteries, she's now the great-grandmother of six.

The photo above was snapped by Chris Colin, a San Francisco-based writer who also happens to be Cook's grandson.

His tweets have recently gone viral for one special picture that's brought two Gerber babies together across multiple generations.

In 2018, Lucas Warren became the latest Gerber spokesbaby, beating out every one of his 140,000 contenders. Warren's not just a pretty face, though; he's also a trailblazer. He's the first baby with Down syndrome to win the contest, bringing some much needed representation to the brand.

Recently, Warren and his parents visited Cook at her home in Florida. According to eyewitnesses (read: the people who were there literally melting into puddles of goo), they were fast friends.

"As soon as we walked into the room, she and Lucas immediately bonded," Warren's parents told People. "Lucas walked right up to her, flashing his signature smile and waving, and we could tell he loved her right away." He also shared his cookies which, if you know babies, says a lot.

Of course, the two also had an obligation to their public, so of course they stopped to take one of the most adorable pictures I have ever seen.

The photo's adorable. And Lucas Warren's new status as the Gerber baby is historic.

One of Gerber's missions is making it clear that every baby is a Gerber baby. Warren being picked as this year's spokesbaby is a step in showing the world that all babies (and, by extension, all people) should be accepted for who they are.

Approximately 6,000 babies are born with Down syndrome every year in the United States. Warren's parents want his win to be a symbol of hope to the families of children born with the condition or any other disability.

"We're hoping this will impact everyone — that it will shed a little bit of light on the special needs community and help more individuals with special needs be accepted and not limited," Warren's father told "Today" shortly after the 1-year-old won. "They have the potential to change the world, just like everybody else."

Note: We weren't paid by Gerber for this story — we'd tell you if we were — we just think it's a neat bit of history paving the way for the future.