She saw a man harassing a teen on a plane. The action she took is why her tweet thread went viral. 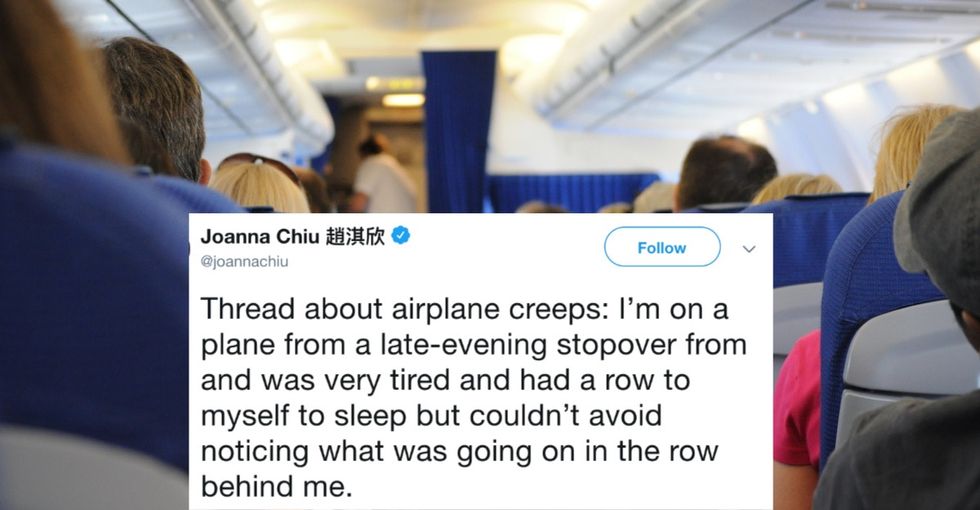 Women of all ages are at risk for being on the receiving end of unwanted advances from men.

While adult women often learn to build up a defensive armor, for younger women and girls, it's harder to know what to do. And that can make the situation all the more terrifying.

Even now that I’m in my 20’s, being hit on by older men still causes me anxiety-especially when cornered. In those terrifying moments, I wish more than anything that someone was there to help.

Thankfully, when a teenager on a late-night flight found herself next to an inappropriate stranger, journalist and editor Joanna Chiu had her back.

Chiu was headed to Vancouver and hoping for a restful trip when she noticed a middle-aged man being suspiciously friendly with a teenager girl.

Ever the journalist, she decided to tweet the situation so there'd be a clear record of what transpired.

“Thread about airplane creeps: I’m on a plane from a late-evening stopover from and was very tired and had a row to myself to sleep but couldn’t avoid noticing what was going on in the row behind me,” Chiu began in a tweet thread.

Thread about airplane creeps: I’m on a plane from a late-evening stopover from and was very tired and had a row to… https://t.co/OJsdWLnsse
— Joanna Chiu 趙淇欣 (@Joanna Chiu 趙淇欣) 1553498585.0

Initially, the conversation between the man and girl was sadly typical — the teen was friendly, and the man took that as an invitation to hit on her.

She was friendly and he seemed to take that as a welcome cue to get very familiar and started teasing her and kept… https://t.co/i2Waq04Jes
— Joanna Chiu 趙淇欣 (@Joanna Chiu 趙淇欣) 1553498587.0

When he offered the teen his phone number – she ignored him — and then asked her for a dirty photo, Chiu leapt into action.

“As soon as he asked for a “dirty” photo while leaning close to her I turned around and rage-whispered exactly what I thought of that and he didn’t say anything back and went off to use the washroom,’ she wrote during the story’s retelling.

It did, and as soon as he asked for a “dirty” photo while leaning close to her I turned around and rage-whispered e… https://t.co/UNMhUfDJGY
— Joanna Chiu 趙淇欣 (@Joanna Chiu 趙淇欣) 1553498587.0

Chiu was NOT willing to sit by and let this teen be harassed.

Harassment is all too familiar to women — perhaps that makes us hyper-aware of the early stages.

Within her thread, Chiu retold some of her first experiences with harassment in her youth — something nearly all women can relate to — including a time she was kissed without her consent.

The second time I traveled alone an older man struck up a convo while we waited for boarding and he asked about man… https://t.co/Y8DwfdeenO
— Joanna Chiu 趙淇欣 (@Joanna Chiu 趙淇欣) 1553498592.0

While harassment is not bound to the limitations of gender, women are substantially more likely to be on the receiving end.

In 2018, an online study produced through a nonprofit called Stop Street Harassment explored sexual harassment and assault, and discovered that 81% of women and 41% of men reported being harassed in some capacity during their lifetime.

It’s heartbreaking to consider how often young girls and women are harassed with no one there to help.

But Chiu was this time, and she wasn't going to sit idly by and let it happen. She alerted the flight attendants who acted quickly, cross-checked accounts, and despite resistance — and aggression — the stranger eventually got up and moved.

They checked other witness accounts and the head of the flight service (a woman) asked the man to move. He resisted… https://t.co/Ekdko3dhlg
— Joanna Chiu 趙淇欣 (@Joanna Chiu 趙淇欣) 1553498588.0

The team of women who witnessed the incident spoke up and made sure the girl was comfortable.

Still, Chui couldn’t help but notice that no men were involved in the de-escalation of the situation.

But none of the male passengers seemed to show they noticed what was going on. Maybe fellow women are more likely t… https://t.co/j0rpEt1aDx
— Joanna Chiu 趙淇欣 (@Joanna Chiu 趙淇欣) 1553498591.0

Many falsely believe harassment is a "women’s issue."

That said, more men today are starting to step up and help prevent sexual assault. Organizations like A CALL TO MEN are challenging traditional ideas of manhood and reminding men their role in harassment prevention for all.

Later in the thread, Chiu pointed out the importance of men doing their part to combat harassment whenever it arises.

“All adults need to be on guard and know there are things we can do to intervene even when a crime hadn’t technically been committed yet. Men need to figure out how to “spot creeps” in their vicinity as well and men can help too to prevent harassment or assault,” she wrote.

All adults need to be on guard and know there are things we can do to intervene even when a crime hadn’t technicall… https://t.co/Rp2zVvh1Qu
— Joanna Chiu 趙淇欣 (@Joanna Chiu 趙淇欣) 1553498593.0

But Chiu did just fine taking this particular harasser to task without the help of men. Ah, the power of the internet.

Wow this took off overnight. Can we share some resources on how to intervene safely in public spaces?
— Joanna Chiu 趙淇欣 (@Joanna Chiu 趙淇欣) 1553530435.0

Since then, the viral thread has become a resource where Chui hopes men and women alike can find guidance on what to do when the overhear or witness sexual harassment and abuse in public.

Modern-day movements like #MeToo, and the growing trend of publicly calling out offenders has become a tool of empowerment for women who've experience and witnessed these situations first-hand.

Obviously, it's not just up to women to end sexual harassment and assault. But they're doing a damn good job of challenging harassers and making it clear the days of silent passive victimhood are over.