Police went undercover to catch criminals. Their failure was inspiring.

He went looking for the worst in humanity. Instead, he found the best. 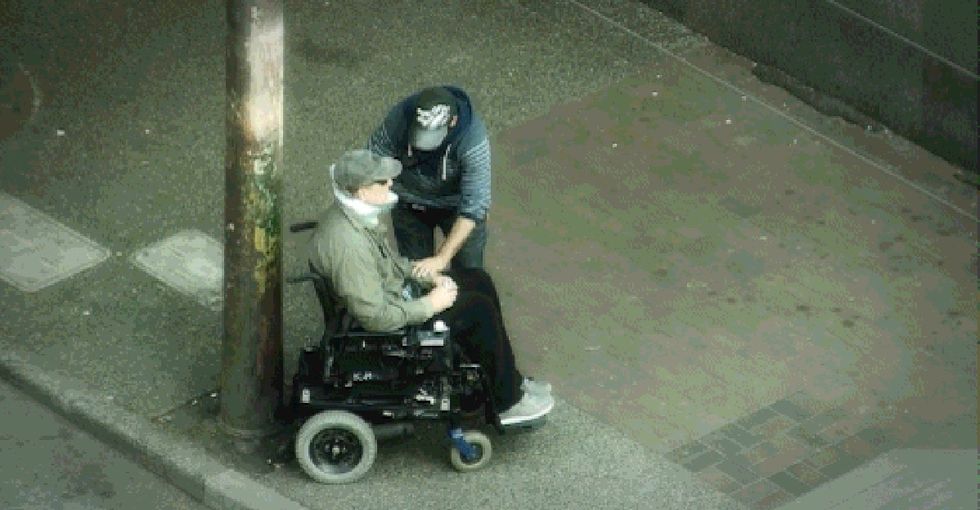 After two robberies of wheelchair-bound people that were carried out at knifepoint, a Vancouver police officer went undercover as a paralyzed man in a wheelchair.

Staff Sgt. Mark Horsley took on the role of a paralyzed person with a brain injury who was confined to a wheelchair.

Dubbed Operation Wheelchair by the police department, the goal was to find the person or people responsible for victimizing folks who were more vulnerable because of their disabilities.

The officer expected people to take advantage of him or maybe even rob him. But that's not what happened.

Instead, he got to know other members of the community who use wheelchairs.

A young man asked if he could pray for the undercover officer.

Another stopped to chat with the officer about his own mother who was in a wheelchair. During the encounter, the man reached out toward the officer's waist pouch, where some of his money was sticking out.

But get this: He wasn't trying to steal it. The man instead zipped it up and kindly warned the officer to be careful not to lose his money.

Much to his surprise, instead of being victimized, he saw repeated displays of human kindness. And it didn't end there.

The officer also told anyone he interacted with that he couldn't count.

That gave people who purchased things from him — or in one case where a woman asked him for change for a $5 bill — an opportunity to be dishonest.

But nobody was. Instead, at the end of the operation, the officer had $24.75 more than he started with.

People chose to give rather than steal.

We usually see news stories about people doing bad things, but those aren't the only stories.

The reality is that there are lot of kind people in the world who treat others with respect and consideration.

That may not be 5 o'clock newsworthy, but it's worth remembering and sharing.

"Not one person took advantage of my vulnerability... . The caring and compassion expressed to me in my undercover role was inspiring."

You can watch the Vancouver Police Department's video summary of their operation for a quick reminder that there are lots of decent people everywhere.