People are loving this dad who wears his baby to work. Here's why it matters. 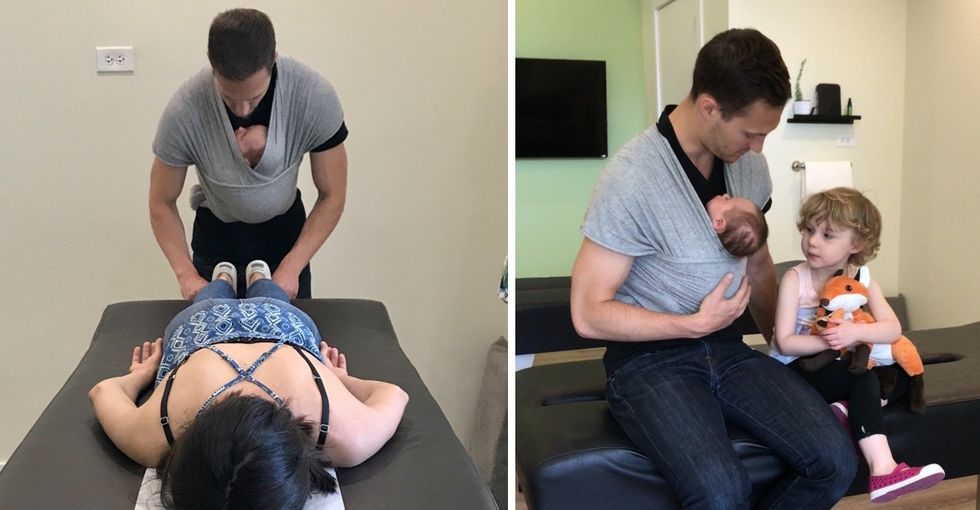 For Tom Williams, a chiropractor from Chicago, every day is bring your son to work day.

At his family-based practice, which he runs along with his wife, Lauren, Tom is used to having kids in the office. In fact, his new son, Oliver, was nearly born there — Lauren was staked out at the front desk when she first went into labor.

After some recovery at home, the couple wanted to get the business back up and running again, but as parents and entrepreneurs, it was a challenge. Tom loved helping take care of his wife and new son, but wanted to get back to taking care of his patients too.

So together, Tom and Lauren came up with a pretty cool idea.

A few days per week, Oliver comes to the office where he splits time at Mom's desk and strapped to Dad's chest.

Tom was photographed by a patient earlier this month wearing a contented Oliver while casually giving an exam, and people across the internet are absolutely loving it.

"Just seeing Dr. Tom, he's such a calm doctor and such a loving person and I thought he was going to take the baby off, but he said, 'Nope the baby's sleeping' and started adjusting all of us,'" the patient who first shared the story, Genia Rackos, told ABC News. "I think he shows a really good example of what work-life balance is. He wears his baby with pride and it stands for everything he's about."

"I wear him in the office because it’s a chance for me to strengthen our bond," Williams says. "I truly love wearing him and that’s why we do it all the time. "

Tom is quick to point out the emotional and biological benefits of baby-wearing. But there's something even bigger at play here.

It's not uncommon to see a waitress taking orders with a sleeping baby across her chest or a small bassinet tucked in the corner of a cubicle in some corporate office.

Here's the catch: Figuring out what to do with baby during the day usually winds up being the mom's problem. A survey done by Parenting.com found that moms often wind up doing the lion's share of caretaking.

But the tide is turning, with more and more dads feeling empowered to take on a larger, if not the starring, role in raising the next generation of babies.

Guys like Williams are leading the charge, proving what moms have known for years: You can be a great parent and be good at your job, but no one ever said it'd be easy.