There are always two sides to every story. 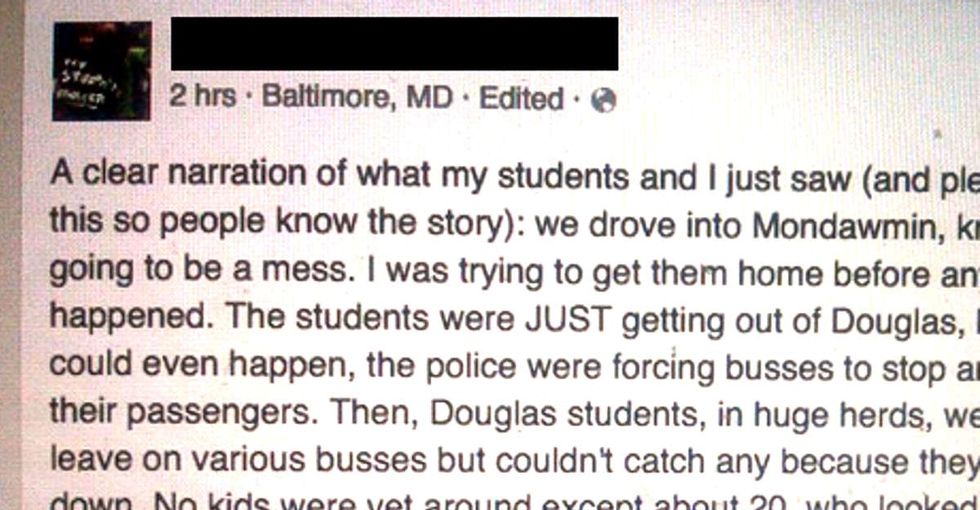 By now, you probably know about the riots in Baltimore.

The vast majority of residents, angered by the still-unexplained death of Freddie Gray, engaged in peaceful protests. But some clashed violently with police.

If you were reading the official police account, you might think that this all started when a bunch of hulking brute maniacs armed with bricks and rocks just came out of, like, freaking nowhere and started gleefully attacking police officers who were minding their own business.

But these tweets leave out a big part of the story.

Many of the original "rioters" and "looters" weren't hulking brute maniacs. They were kids. And they were just getting out of school when the violence began.

Baltimore schools don't have yellow buses. Most kids ride home on public transit. And according to one woman, a teacher in Baltimore who was on the scene, the mayhem began when cops started pulling kids off of buses as they were trying to make their way home.

Now obviously, this is just what one woman saw.

But the point is this.

If you've got a bunch of stressed out teenagers full of...

...taking away their ride home and meeting them in the street like this...

...is not exactly a recipe for success.

Numerous studies have found that the presence of heavily armed police in angry crowds can aggravate the situation, rather than de-escalate it. That's what we saw play out in Ferguson, Missouri. And there's a strong possibly that's what we're seeing play out now in Baltimore.

Now, obviously no one should attack police officers. But police officers are professionals. If they can't calm down a bunch of teenagers without letting it escalate into chaos, then there's probably something wrong with the way they're doing their jobs.

As one Baltimore resident astutely put it:

It's a really good question.