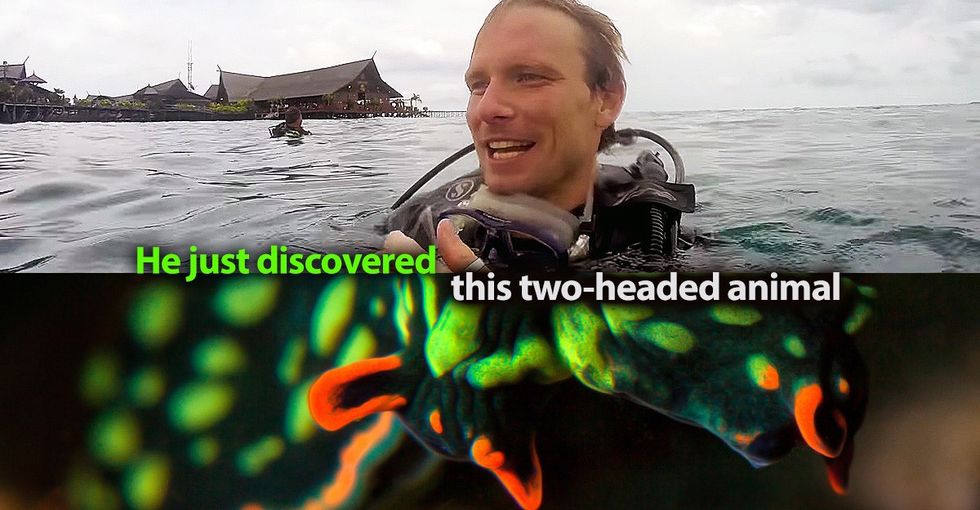 In today's installment of fascinating marine biology news, something unusual has been discovered in the ocean. And it has two heads.

All images by Borneo from Below, used with permission.

It's called a nudibranch. More specifically, it's a two-headed nudibranch.

Borneo from Below is a cool weekly series about the beautiful marine life of Borneo, and they shared this unusual discovery with us.

What even is a nudibranch?! Basically, it's a sea slug.

We'll get back to the two-headed nudibranch in a minute. First, let's talk about the more common version of this creature — the one with a single head.National Geographic describes nudibranchs as follows:

"[T]hese shell-less mollusks, part of the sea slug family, bear some of the most fascinating shapes, sumptuous hues, and intricate patterns of any animal on Earth.

There are more than 3,000 known species of nudibranch, and new ones are being identified almost daily. They are found throughout the world's oceans, but are most abundant in shallow, tropical waters."

They're pretty, right? But let's get back to the one with two heads.

Clay Bryce, a marine biologist of Western Australian Museum in Perth, is a nudibranch expert. He's spent over 10,000 hours underwater "chasing nudibranchs," and he says he'd never seen one before this.

"Usually this sort of deformity sets the animal up for an early death, but it does appear to be adult or at least subadult," Bryce told Borneo from Below. "So perhaps this is a case of two heads being better than one!"

Soooo, how'd the two heads happen? Bryce said it's basically a birth defect. It could be "just a slight mix-up in the genes or perhaps damage caused by pollution," although he would expect to see more of them if it was a result of pollution.

For now, we'll have to take it for what it is: an anomaly in nature, kind of like the occasional two-headed snake ... but less freaky and much prettier.

We should care about all ocean life given how important the ocean is to our survival. (Our oceans produce over half of the oxygen in our atmosphere!) But the ocean is also a fascinating mystery we're still learning more about every day. Learning what lurks beneath the waves is one way we can feel more connected to our oceans and our planet and our two-headed Nembrotha kubaryana friends.

You can watch the full video and see the discovery for yourself!