Obama playing Santa at this children's hospital is almost too much goodness to handle. 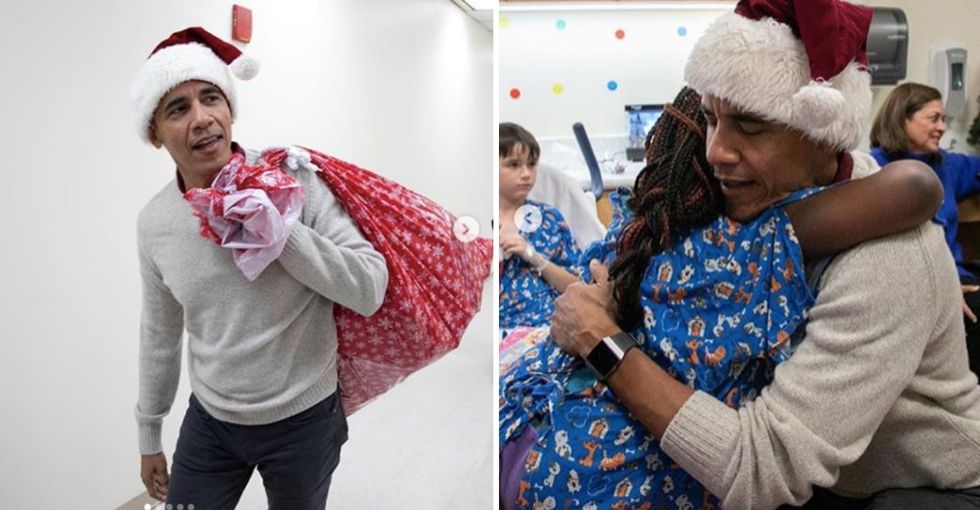 Did you feel that? That was a huge portion of the internet swooning in unison.

President Obama surprised the children at Children's National Hospital in Washington, D.C., and some of us will never be okay again.

I'm a fan, clearly. But I'm not sure how anyone with a heart couldn't be. Regardless of your feelings on his policies or politics, the genuine sweetness of this man should be painfully apparent by now. Unless you've been poisoned by hateful or racist rhetoric and think that his above-and-beyond kindnesses and post-presidential life of charitable work are all some big act, you've got to admit he's just a darn good guy.

Reactions to Obama's Santa visit exemplify how many miss the former president—and how fiercely.

Children's National shared a video montage of the visit, and seeing the kids' faces light up is just too priceless.

Thousands of people responded to the video with comments filled with praise for the former leader of the free world (#stillmypresident #howfarwehavefallen #luvu4ever, etc.) But the overall sentiment is probably best summed up in these GIF responses:

Oh, yeah. He said "Merry Christmas," too. STOP THE PRESSES.

This seems like a good time to remind the folks who keep insisting that Obama banned the phrase "Merry Christmas" while in office that that's a bit load of hooey. Not only did the former president wish Americans "Merry Christmas," using those exact words, repeatedly, while in the White House, he said it again to the lovely folks at Children's National and to the entirety of Twitter in his share of the hospital's video.

I KNOW. It's simply shocking that a Christian American would say "Merry Christmas." (If you really want to have your socks blown off, watch the Obamas' final Christmas address in office where Obama says, "...we will join our fellow Christians around the world to rejoice in the birth of our Savior.")

Thank you, President Obama, for inspiring us with your generous spirit and for giving us a gut-punching reminder of what we once had. Merry Christmas and Happy Holidays to you, sir.