Marco Rubio's emotional tirade against Donald Trump is required viewing for every voter. 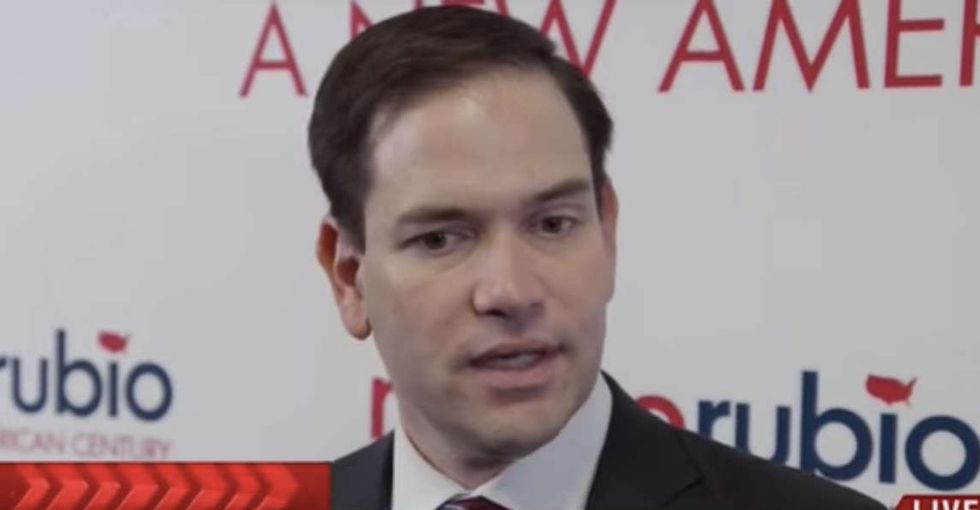 Update 3/16/2016: Last night, Rubio suspended his campaign for president. While it came too late to rescue his candidacy, his searing indictment of Trump was perhaps his campaign's rawest, most important moment.

On Saturday, March 12, a visibly distraught Marco Rubio stood in front of the press and slammed Donald Trump for inciting violence.

The Florida senator, who has been criticized for giving pre-programmed answers to tough questions, finally got real about the Republican frontrunner — and he didn't hold back.

"This boiling point that we have reached has been fed, largely, by the fact that we have a frontrunner, in my party, who has fed into language that basically justifies physically assaulting people who disagree with you," a clearly shaken Rubio said, referring to events at Trump rallies in Chicago, St. Louis, and elsewhere last week.

"How are you going to be the commander-in-chief of the U.S. armed forces when you have men and women of the Muslim faith who serve us in uniform? Who could be killed in action?" Rubio said.

...called the billionaire out for his reckless, irresponsible leadership...

"Leaders cannot say whatever they want," Rubio explained. "Because words have consequences. They lead to actions that others take. And when the person you're supporting for president is going around saying things like, 'Go ahead and slap him around, I'll pay your legal fees,' what do you think is going to happen next? Someone is actually going to literally believe it."

...and expressed fear for the future of American politics.

A reporter asked Rubio if he'd still support Trump if he became the Republican nominee.

You don't have to agree with Rubio on policy or politics to applaud his candid warning about Trump.

Rubio certainly hasn't been perfect. Not only did he wait to issue his condemnation of Trump until the billionaire was already the odds-on favorite for the nomination, but in some cases, Rubio's own rhetoric has been nearly as divisive as Trump's. He's suggested that, as president, he'd be open to shutting down not only mosques but "any place where radicals are being inspired." He's even implied that President Obama is doing deliberate damage to America (several times in the same debate, no less).

With his latest comments, however, the Florida senator finally drew a distinction between his disagreements with President Obama and the dangerous rhetoric coming from Trump.

The fact is: When a leading presidential candidate tacitly encourages his supporters to assault protesters and then stands back — or even offers to financially support them — when they act on his suggestions, a line has been crossed.

This is bigger than Republican versus Democrat. This is about standing up for the idea that a political candidate who inspires their supporters to commit acts of violence against people who disagree with them is dangerous for democracy — and America.

Even though Rubio certainly isn't the first person to say this about Donald Trump's campaign, his condemnation — while late — gets it exactly right.

Watch the full interview below.