The clip has gone viral — and for really good reason. 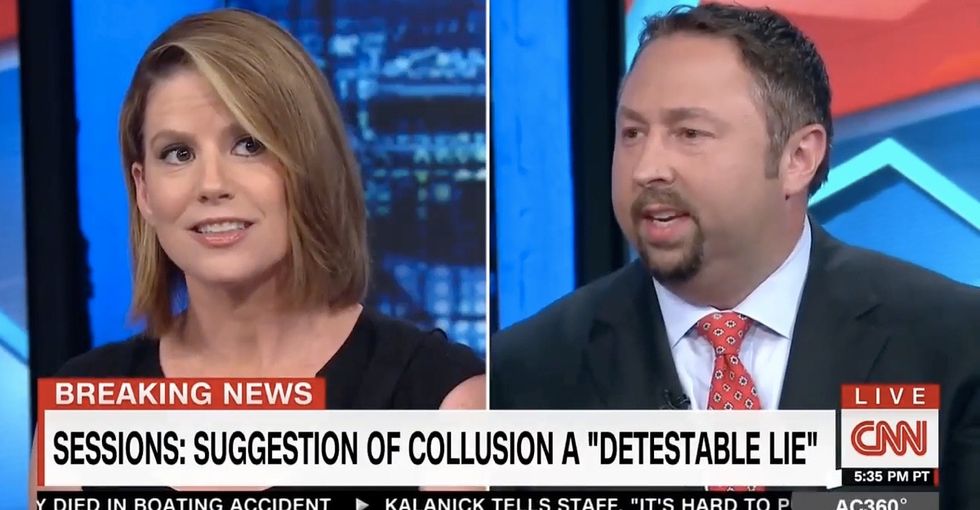 Sen. Kamala Harris went into the Senate Intelligence Committee hearing on June 13, 2017 with a list of hard-hitting questions for Attorney General Jeff Sessions.

Though Sessions did what he could to dodge them, Harris was dogged in her pursuit of the truth.

Anyone who tuned in to CNN later that night for coverage of the hearing heard a slightly different analysis, including one word in particular that stood out: "hysterical."

USA Today's Kirsten Powers took issue with former Trump advisor Jason Miller's description of Harris's behavior and asked him to explain why he thought Harris was being any more "hysterical" than her male counterparts.

"I think calling her hysterical is probably a little gendered," Powers told him, when he couldn't give an explanation.

Before Powers had even finished her statement, panelist Jeffrey Lord interrupted to insist "hysteria is a neutral quality."

"It's just women who are usually called hysterical," Powers responded.

As a concept, "hysteria" can be traced back to an ancient Greek belief that connects excessive emotion to the uterus. Seriously.

British scholar Helen King traces the term back to Hippocrates. While that usage faded, "hysteria" returned during the Victorian era and has been used as an excuse to dismiss women as being uncontrollable, irrational bundles of emotion ever since.

And while it's no longer solely used to describe women, a simple keyword search on Google Books of all English books published between 1800 and 2000 show the descriptor is applied to women on a much more regular basis than men.

Add in the fact that there's no conclusive evidence that women are any more "emotional" than men, and you see where the problem is with singling Harris out specifically as being the "hysterical" one in that hearing.

In the context of the hearing, if you were to label anyone "hysterical," the most appropriate recipient would probably be a visibly flustered Sessions, who at one point talked about how Harris' questions made him feel nervous.

Too often, "hysteria" is still used to dismiss strong women with opinions and drive.

In Miller's case, whatever point he had in trying to dismiss Harris' questioning was rendered moot by a sloppy choice of words that reflected his own sexism.

He might claim that his perspective was "objective" in ways that Powers' analysis wasn't (the implication being that Powers isn't capable of seeing things rationally); but the moment he called Harris "hysterical," he betrayed his own subconscious fear of — and bias against — strong and opinionated women.