America is a bit behind on the HPV vaccination trend. I'll explain why that's a problem. 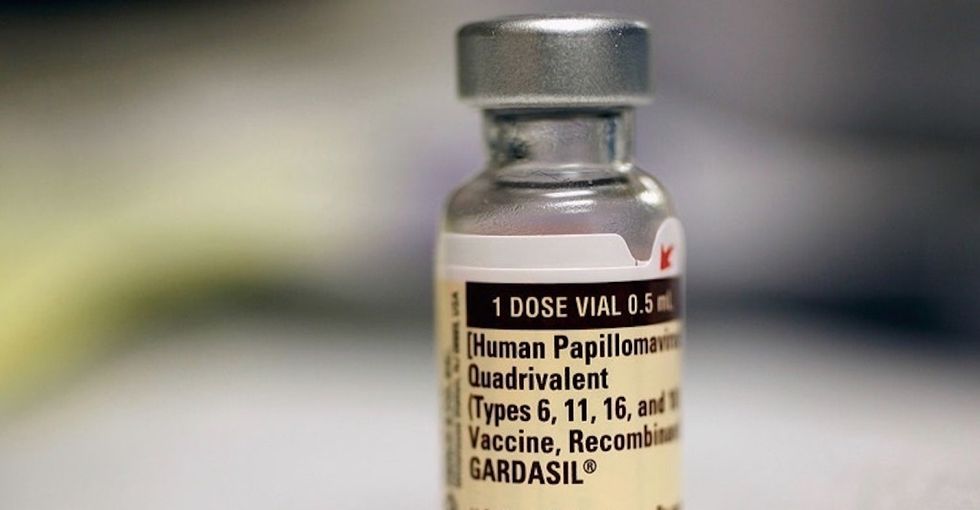 Remember when I explained how polio isn't really a thing anymore in the U.S.?

A polio victim in 1947. Photo by Sonnee Gottlieb/Hulton Archive/Getty Images.

That's because we invented and then distributed vaccines to as many people as possible. Today, polio's gone from a modern scourge to a hazy shadow, infecting fewer than three dozen people in 2015. And even with a recent set back in Nigeria, we're incredibly close to making polio a thing of the past.

Well, thanks to another vaccine, we might be able to drive another disease into the shadows, too.

HPV, also known as the human papillomavirus, is a big family of viruses that live in human beings. Some strains are relatively harmless, causing problems like common warts. Others, however, are much more serious.

Some strains of HPV can be spread through sexual contact and are known to cause several different kinds of cancer, including almost all cases of cervical cancer.  And these cancer-causing strains are incredibly common: About 14 million Americans catch them every year. HPV is basically the common cold of sexually transmitted infections.

10 years ago, however, we got a vaccine for HPV. And the latest numbers show it's been incredibly effective.

The vaccine, which is meant to be given to kids sometime between their pre-teen years and early 20s, specifically targets some of the strains of HPV known to cause cervical cancer (from here on, I'm going to use "HPV" to specifically refer to these strains, by the way). Early tests on the vaccine showed a lot of promise, and this year those numbers have been seriously backed up.

Earlier this year, a worldwide study suggested an up to 90% drop in infection rates in countries with a high level of immunization.

They also showed an 85% drop in the kinds of pre-cancer signs associated with cervical cancer in those populations.

In the U.S., however, pickup on the HPV vaccine has been a little slow, possibly because of stigma and a few common misconceptions.

According to the Centers for Disease Control and Prevention in 2015, only about 50% of U.S. boys ages 13-17 and about 62% of girls got at least one round of the vaccine (it takes three shots, spaced a few months apart, to become completely immunized). This is great compared to other years — the numbers are rising — but compared to other countries, we're still a bit behind.

What are some of those misconceptions?

Actually, we know that HPV is the most common sexually transmitted infection. Like I mentioned above, each year about 14 million people catch it and about 27,000 cases of HPV-caused cancer are diagnosed.

Actually, we know that vaccines — including the HPV vaccine — are on the whole pretty damn safe.

3. "You only need the HPV vaccine if you're sexually active, so I don't need to give it to my kids."

It's true that people who've never been sexually active aren't really at risk of HPV, but immunizing a teenager can protect them well into their adult life. Plus, the best time to prevent infection is before they've ever been potentially exposed, so giving it to kids actually makes a lot of sense.

Boys can benefit from it too. While it's most well-known to cause cervical cancer, HPV can cause other kinds of cancer too as well as genital warts. Plus, by getting vaccinated, a man can protect any sexual partners he might have!

(This reluctance may also have a bit to do with the stigma surrounding the fact that HPV is an STI, too, but talking about STIs is an important part of sex education and something we shouldn't shy away from.)

We're on our way to putting HPV on the same bookshelf as other extinct diseases, like polio and smallpox.

A girl gets an HPV shot in Honduras. Photo by Orlando Sierra/AFP/Getty Images.

In an article by the BBC, professor Ian Frazer, one of the scientists who created the first HPV vaccine, was quoted as saying, "If we vaccinate enough people, we will eliminate these viruses."

A world without the single greatest cause of cervical cancer? And we get a whole lot of other cancers down at the same time?