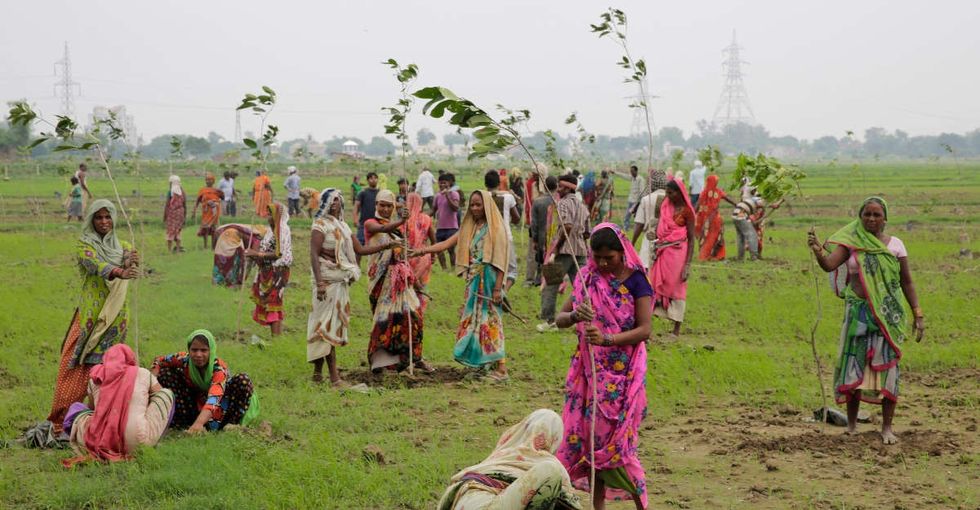 Quick! Trivia question: How many trees is a lot of trees?

That's how many trees were planted by volunteers in the Indian state of Uttar Pradesh in the span of 24 hours.

"The world has realized that serious efforts are needed to reduce carbon emissions to mitigate the effects of global climate change. Uttar Pradesh has made a beginning in this regard," Akhilesh Yadav, chief minister of the state, told participants in the effort to set a new Guinness World Record, according to an Associated Press report.

The group was attempting to shatter the previous record of 847,275 trees planted in 24 hours, which was set three years ago in Pakistan.

Hundreds of thousands of people participated in the tree-planting drive, which began on July 11. Roughly 49.3 million were reportedly planted.

"I've read in a book that this tree releases maximum oxygen," eighth-grader Shashwat Rai told the AP. "There is so much pollution in the city, we need trees that produce oxygen."

Hundreds of thousands of people going out in the world to actually do something about climate change is an example we all can learn from.

Simply put, the Earth is warming because the carbon dioxide and other gases we put in the atmosphere are trapping more heat near the surface.

Perhaps the easiest way to help put a pin in global warming is simply to have more trees.

And 800,000 people got off their couches to make that happen. That's pretty great.

Not to mention, trying to break each others' tree-planting records is probably the most productive manifestation of India and Pakistan's geopolitical rivalry ever.

For almost 70 years, the relationship between the two nations has been characterized by competing territorial claims, nuclear brinkmanship, and occasional armed conflict.

So if India wants to challenge Pakistan to a tree-off, I'm all for that. I'd even watch the inspirational movie about it 20 years from now. Like a chlorophyll-soaked Miracle on Ice.

Here in the United States, we've still got to move past square one when it comes to solving climate change.

The Uttar Pradesh effort wouldn't have been possible without coordination between citizens, volunteer groups, and, critically, local government.

Meanwhile, a lot of American policymakers refuse to acknowledge that climate change is manmade and, thus, don't really want to do much about it.

It's important to call them and persuade them otherwise — and if they don't listen, to replace them with people who do.

In the meantime, we can and should tip our caps to a determined team of thousands for making their corner of the world 50,000,000 times shadier.

In the best way possible.