Hundreds of millions of dollars have already been pledged to rebuild Notre Dame. It's only half the battle. 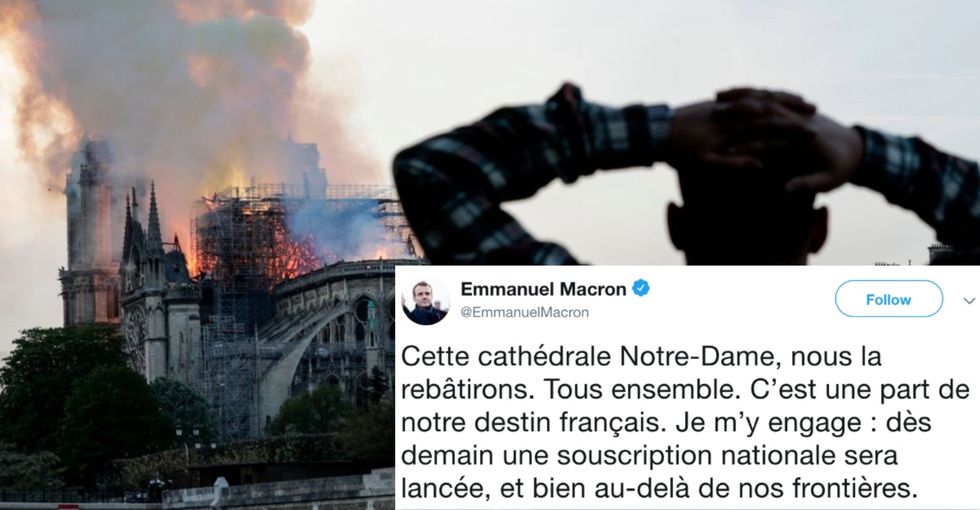 Yesterday, millions of people all over the world watched as one of the most iconic buildings in history went up in flames. Today, they sprung into action.

Whether you'd never seen the cathedral in person or had walked by it everyday of your life, it was a devastating event to witness. And while many are still in mourning over the loss of Notre Dame's grand spire, many others are already making a plan to restore the cathedral to its former glory.

Unsurprisingly, the President of France, Emmanuel Macron, ever the activist, was one of the first to pledge himself to the task. "This Notre-Dame Cathedral, we will rebuild it. All together. This is part of our French destiny. I am committed to this: from tomorrow a national subscription will be launched, and far beyond our borders," he wrote on Twitter (translated into English).

Macron is also launching an international fundraising campaign to help with the extensive repairs.

Several prominent french people with deep pockets immediately followed suit by vowing to donate millions of dollars to aid in the restoration.

On Tuesday, Francois-Henri Pinault, chairman of Kering (the parent company of Gucci) announced that he and his father would donate 100 million euros (roughly $112.98 million). The pledge seemed to spark some friendly philanthropic competition among French billionaires as Bernard Jean Étienne Arnault, chief executive officer of LVMH, the world's largest luxury-goods company, vowed to give 200 million euros to the cause.

It might sound like they have plenty to get the job done, but some experts say that money is only half the battle. The other half is figuring out how to put a building that hundreds of years old back together when very few records about its construction have been kept.

"The stripped roof and upper masonry will reveal aspects of the building's history which probably haven't been understood,"architectural historian and broadcaster, Jonathan Foyle, told CNN. "Notre Dame has virtually no building records. We know (that construction) started in 1163 and was basically completed by about 1240, but there are no building accounts."

"Evidence for the evolution of that building is in the physical fabric, so you'll need an army of archaeologists all over it to better understand which parts they're repairing and what they belong to."

So, even with the large pledged budget, the likelihood is the restoration will take years if not decades.

That said, Notre Dame has suffered damage and been through restorations before and survived. While the fire was devastating, structural experts who've worked closely on the structure say it could've been much worse.