Well this is all a very brilliant way to show what it's all about. 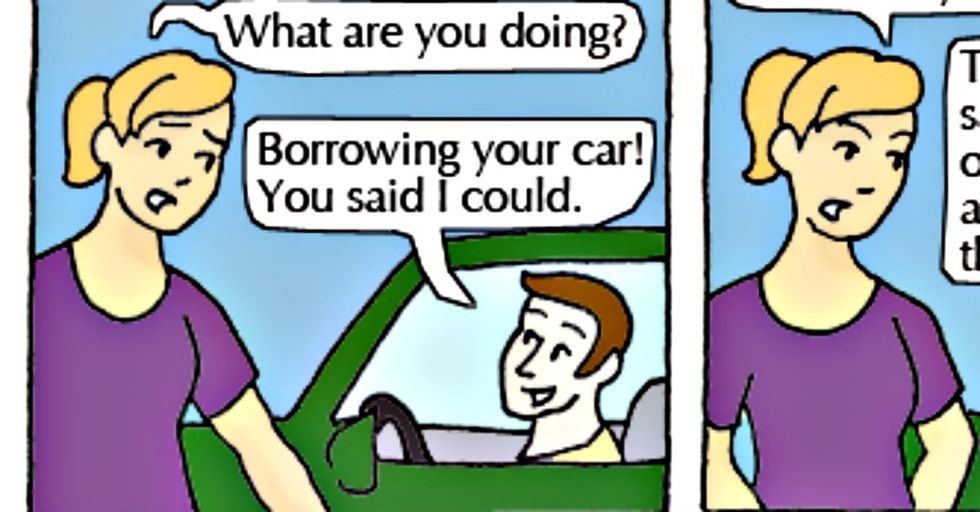 This article originally appeared on 06.27.15

In 2013, Zerlina Maxwell ignited a firestorm of controversy when she strongly recommended we stop telling women how to not get raped.

Here are her words, from the transcript of her appearance on Sean Hannity's show:

So essentially — instead of teaching women how to avoid rape, let's raise boys specifically not to rape.

There was a lot of ire raised from that idea. Maxwell was on the receiving end of a deluge of online harassment and scary threats because of her ideas, which is sadly common for outspoken women on the Internet.

People assumed it meant she was labeling all boys as potential rapists or that every man has a rape-monster he carries inside him unless we quell it from the beginning.

But the truth is most of the rapes women experience are perpetrated by people they know and trust. So fully educating boys during their formative years about what constitutes consent and why it's important to practice explicitly asking for consent could potentially eradicate a large swath of acquaintance rape. It's not a condemnation on their character or gender, but an extra set of tools to help young men approach sex without damaging themselves or anyone else.

But what does teaching boys about consent really look like in action?

Well, there's the viral letter I wrote to my teen titled "Son, It's Okay If You Don't Get Laid Tonight" explaining his responsibility in the matter. I wanted to show by example that Maxwell's words weren't about shaming or blaming boys who'd done nothing wrong yet, but about giving them a road map to navigate their sexual encounters ahead.

There are also rape prevention campaigns on many college campuses, aiming to reach young men right at the heart of where acquaintance rape is so prevalent. Many men are welcoming these efforts.

And then there are creative endeavors to find the right metaphors and combination of words to get people to shake off their acceptance of cultural norms and see rape culture clearly.

There you have it. Seven comparisons that anyone can use to show how simple and logical the idea of consent really is. Consent culture is on its way because more and more people are sharing these ideas and getting people to think critically. How can we not share an idea whose time has come?

These new cookies from Pillsbury can help give veterans safe, rent-free homes as they re-enter civilian life

Baking just got even better

Heather Wake
All photos from Pilllsbury used with permission

Pillsbury is partnering with non profit, Operation Homefront, to provide housing for veterans

It’s the dream of many veterans: a safe and swift return to the security of home – to a place where time can be spent with family while becoming part of a community and creating new memories. With the partnership of non-profit Operation Homefront, Pillsbury is helping give military families the opportunity to do just that.

For many of our American soldiers, the dream of making a comfortable return to civilian life is often dashed by harsh realities. Pew Research Center reports that 44% of veterans who have served since Sept 11, 2001 noted having a difficult time re-adjusting. From re-entering into the workforce to finding healthcare services, returning to civilian life can be a harrowing transition. While serving in the military is incredibly stressful, it also provides routine, structure and purpose that is not easily replicated in civilian life. Couple this with a lack of helpful resources for veterans, and the hope for a brighter future can be easily derailed.

However, some companies and organizations are stepping in to show support and provide resources. Operation Homefront, an organization dedicated to helping military families transition back to civilian life, launched its Transitional Homes for Veterans (THV) Program in 2018. The program places veteran families in safe, secure, rent-free single-family homes for a period of two-to-three years while providing financial coaching and training to reduce debt, increase savings, and prepare for independent home ownership. Since the THV’s inception, Operation Homefront has defrayed more than $500K in mortgage costs to military families.