Here is a music video about handwashing that features a flying bar of soap. You're welcome. 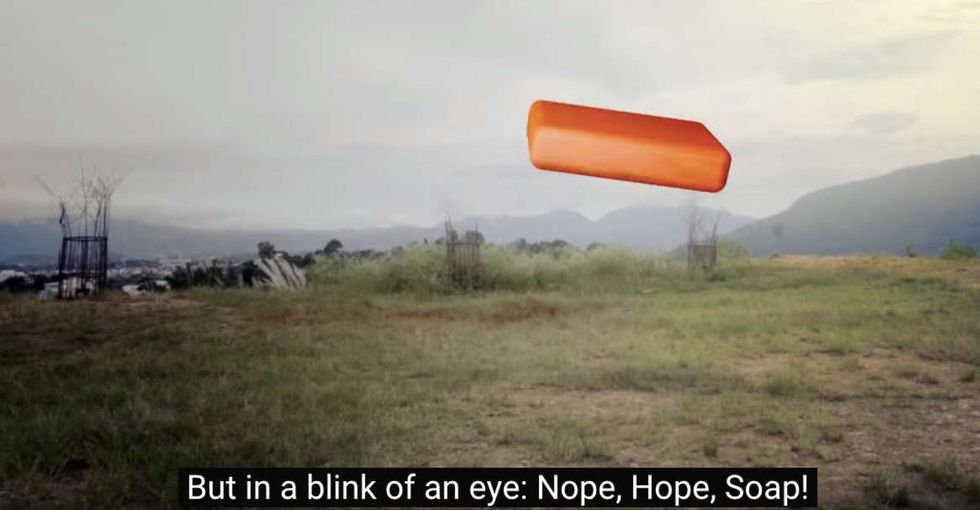 Washing your hands is one of easiest, most affordable ways to prevent the spread of disease.

According to the Centers for Disease Control and Prevention, washing your hands could potentially protect one out of every three children who get sick with diarrhea and nearly one in five who contract respiratory infections — often lethal diagnoses for young children around the globe.

Since 2008, leaders from around the world have participated in Global Handwashing Day to raise awareness about the importance of clean hands. Local organizers, including governments, private corporations, and nonprofits, hold events to build sinks, install handwashing devices called tippy taps, and host demonstrations to teach proper handwashing techniques.

Student participate in Global Handwashing Day events at their primary school in Johannesburg, South Africa, in 2012. Photo by Greg Marinovich/Getty Images for Unilever.

But how do you make handwashing fun and exciting for kids? With an addictive pop song of course!

OK OK OK, I know, I know — a lot of activist groups have tried to make fun, quirky, catchy music videos for numerous causes before, and they're always a bit, well, lame. But this is not one of those videos. It's got pulsing drums, gripping fight scenes, and elaborate costumes.

And I haven't felt compelled to dance this hard since the first time I heard "Single Ladies." To say it plain, this song is a freaking masterpiece.

Composed and performed by Almoda Rana Uprety of Nepal for Global Handwashing Day, this catchy number, "Kina Udcha Sabunman," encourages kids to fly like Sabunman (Soap Man) and defeat evil dirt monsters by washing their hands before they eat and after they play or use the bathroom.

The translated lyrics are nothing short of poetry:

♫ Because before eating a meal / he washes his hands with soap and water. ♫

And yes, while the words are a bit on the nose, the video is funny, full of action and perfect for kids.

Because if the catchy tune, superheroes, and excellent displays of good hygiene don't get you, the choreography will.

One Direction, eat your heart out.

While the sudsy song clocks in around three minutes, you only need to scrub your hands for 20 seconds to get them clean. But good luck turning the song off at the 20-second mark because this wildly addictive tune will be in your head every time you lather up for the rest of the day, if not week, at least.

So celebrate Global Handwashing Day the Sabunman way: by being a hero and washing your hands.

Check out the video for yourself here: