He wrote a song about his mom's cancer. That's when famous musicians sent him their version. 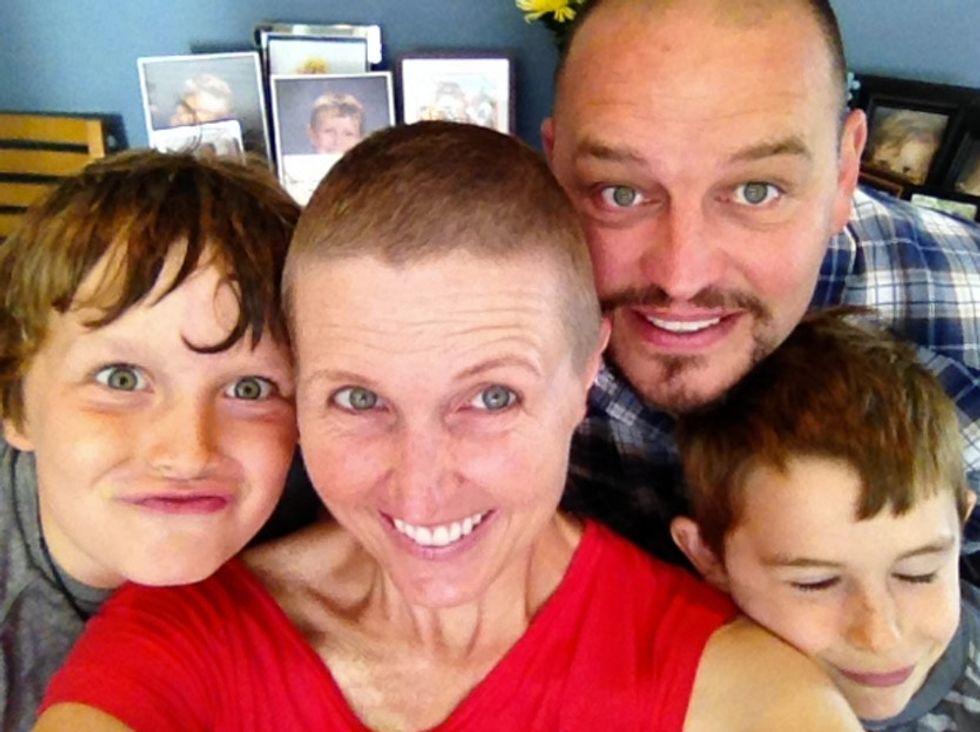 There are some things life doesn't prepare you for.

Like sitting your 9- and 10-year-old kids down on the living room couch to tell them that your cancer came back.

Christi Nelson had already been through the wringer— chemo, hospitalization, a mastectomy — when her oncologist delivered the news. Less than six months after being declared breast-cancer-free, the cancer was back. A second round of chemo was the only shot for the 42-year-old.

So Christi and her husband, Mike, called a family meeting with their sons, Eddie and Archer, to break the bad news. That's when Archer decided he had something to say about the situation.

Eddie, Christi, Mike, and Archer on Mother's Day 2014, just after mastectomy surgery. Photo by Christi Nelson. Courtesy of the family.

"I remember Archer got real quiet," Mike said in a phone interview.

"Then he goes, 'I think cancer is stupid. You know why? Because Mom kicked its butt once, and it came back to get beat up again.'"

Mike says his son's positive attitude helped keep him from getting too dark. "You don't want to see that look of worry in your kid's eye. No kid should have to worry about things like that," he says.

Archer and Eddie. Photo courtesy of the family.

At the time, Mike, a longtime radio DJ in the Bay Area, had been teaching Archer how to burn CDs— "because every cool kid needs to learn '90s technology," he says jokingly. But when he walked into his son's room one day, Archer suddenly turned bashful.

"I think the CD player's broken," he said.

Mike looked inside and pulled out a piece of crumpled-up paper, cut into the shape of a CD. Scrawled on the paper in little-boy handwriting were the words "Boob Spelled Backwards Is Boob."

Archer with his dad. Photo courtesy of the family.

"I made up a song for Mom," Archer said, explaining that he couldn't figure out how to get the song out of his imagination and into the world. So he put his paper "CD" in the stereo, hoping it would play the music he had in his head.

Archer's song combined some surprisingly poetic imagery with nuggets of kid wisdom like, "Never forget the good things in life / Like candy, life, eating, having fun."

Mike was touched. He told the story to some colleagues at KFOG, the San Francisco radio station where he works. That's when his producer recruited the band Spearhead's Michael Franti to set Archer's lyrics to music. Then, they started asking every musician that came through the KFOG studios to contribute something to the song.

"The Grateful Dead heard about it and said, 'We want to be a part of it.' ... They could be doing a million things with their time, and they took the time to do this. I was speechless."

"The idea was to make it like a 'We Are the World' for breast cancer," Mike says.

The couple was stunned by the response from artists.

Christi Nelson just before having her chemotherapy port installed on Oct. 11, 2013. Photo by Kimberly Medina. Courtesy of the family.

"Vance Joy was on tour with Taylor Swift and came to the station and spent an hour working on the song," says Mike. "The Grateful Dead heard about it and said, 'We want to be a part of it.' This was right before they did their 50th anniversary tours; they could be doing a million things with their time, and they took the time to do this. I was speechless."

Within eight months, they had close to a hundred bits of audio and video of dozens of artists performing parts of Archer's song — everyone from Hozier and Noel Gallagher to Steve Earle and Florence Welch of Florence and the Machine.

Milky Chance even sang a few lines into an iPhone backstage at a concert, and Imagine Dragons and Sarah Silverman posed for photos holding a sign with the campaign's hashtag, #BoobProject:

@imaginedragons support the #boobproject! Do you? Pls watch video in bio and SHARE with friends #breastcancerawareness @bcrfcure
A photo posted by KFOG (@kfogradio) on Oct 6, 2015 at 12:50pm PDT

They edited together the footage, creating a star-studdedmusic video and single, and the proceeds benefit breast cancer research.

"It's so exciting to see it grow from innocent, tender beginnings," Mike says of the song."It's just a kid trying to make sense of something that even most adults find pretty hard to comprehend," he adds.

Through sales of the song and donations collected through BoobProject.Org, Mike and Christi hope to raise $100,000 or more for the Breast Cancer Research Foundation.

Since the song came to life, Christi says she's seen a change in her son.Archer wasn't always the most outwardly expressive kid. "His compassion has grown," she says. "He's heeding his emotional side and he's learning that it's OK to do that."

The fam. Courtesy of the fam.

Both parents say they cry every time they hear the song. "It's made me hyper-aware of the relationship I have with my kid, and that I don't want to let him go," Christi says. "There are feelings of mortality, like I have to cherish this moment. I just love him so much."

Fortunately for the Nelsons, the second round of chemo treatment appears, so far, to have worked.

At Christi's recent three-month scan, no tumors were detected.

"I remember when she called me, I was grocery shopping," says Mike. "I walked around Safeway crying, pushing a shopping cart full of vegetables. I felt so happy."

Mike and Christi on a couple's getaway to the San Mateo Coast after Christi was first declared cancer-free, July 20, 2014. Photo by Mike Nelson. Courtesy of the family.

Mike is quick to note that for every story like Christi's, there are thousands of others with unhappy endings — a fact he hopes will change with continued research on the disease.

"When Christi turned 40, she went in for her first mammogram, but if she had put that off for a year or two, she wouldn't be here right now," he says, adding that he hopes the song will inspire people to put their health first. "Feel your boobs, have a doctor check it out, make sure you're OK."

The one must-see video from Disney Plus' Beatles documentary