He offered a guy a free meal, but the guy ran away. So he put up this sign.

We all could use a good deed from a stranger every now and then. 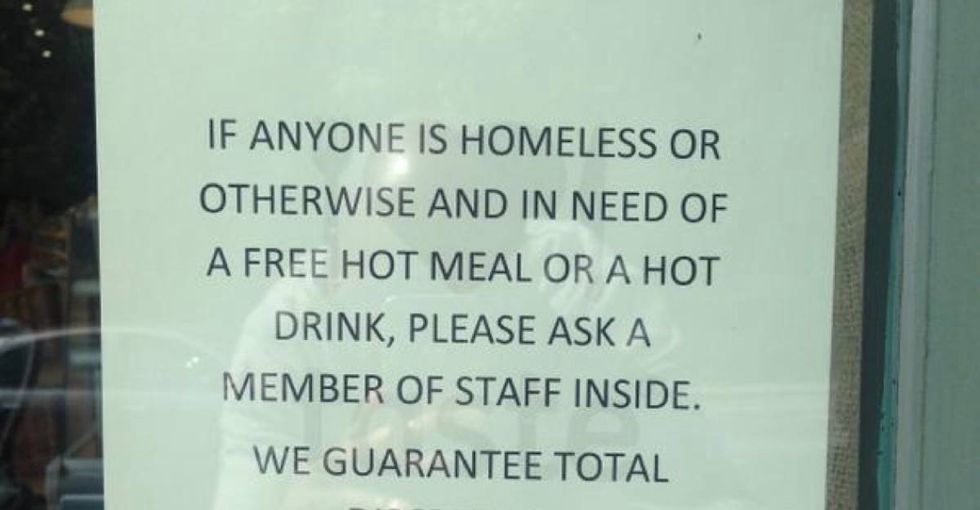 Deli owner Gary Hendrickson knows that we all have moments when things aren't going as planned and could use a little help.

In May 2015, Hendrickson noticed that a lot of homeless folks were rummaging through trash outside his deli in Leeds. Being a kind human being, he would often tell them to go into his deli and ask for a meal. He told his staff there to expect them and offer them a free meal, no questions asked.

Until one day, he spoke to a guy who didn't understand the offer and ran away.

So what's he going to do now that people know about it?

I spoke to Gary over Facebook and asked him if there was anything people could do to help since he's turning away donations. He told me that he's turned down "many offers so far" and is going to "try and speak to some homeless charities to see where we can take this as it just keeps gathering momentum."

Until he's got that figured out, I did some googling and found a charity you can help in the area. Check out Simon on the Streets and donate to them here if you are so inclined.

While random acts of kindness from restaurant owners aren't going to solve the dual problems of homelessness and hunger, they're still worth celebrating.

But hunger is a real and immediate problem — tackling it in the short term is just as important as solving it for people who are going hungry right here and right now.

And until we figure out these bigger, long-term solutions, these random acts of kindness can make a huge amount of difference in the lives of individuals wherever they are.