He calls himself Big Cat Derek, and he makes some of the Internet's most addictive Vines.

Meet the man who made a cougar Internet-famous. Like, an actual cougar. 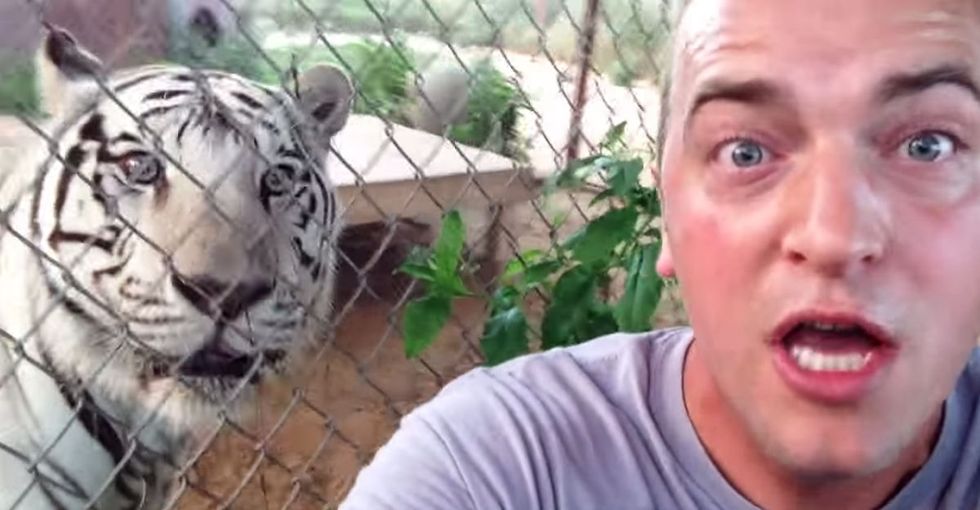 In 2014, a cougar named Cassie started an Internet trend when, despite being told not to, she just couldn't keep from squeaking.

Cassie gives zero flips and doesn't even try. All images and Vines via Big Cat Derek.

Big Cat Derek is the man responsible for Cassie's fame. He lives at a cat sanctuary and keeps a three-legged llama in his backyard.

Nearly a million people follow his hilarious Vines of animals who live at the Center for Animal Research and Education. Derek Krahn — known among social media as Big Cat Derek — has loved tigers since he was little, so when the opportunity arose to volunteer at CARE, he was floored.

“I fortuitously stumbled upon an opportunity to become a volunteer at the facility, and they couldn't get rid of me after that point," he said.

An aviation meteorologist by day and a badass volunteer big cat advocate and caregiver by night, Derek has been with the foundation since 2006 and is now on their board of directors. He even met his wife — human, not cat — there.

Baby lions really love Derek. And not in the "love him for dinner" kind of way.

Upworthy asked Big Cat Derek to share some of his stories about the totally #dorbs cats he interacts with every day.

You've started a lot of trends on social media. Which of your videos went viral first?

Derek: It was our tiger, Levi, and he was just walking around in the snow, and the snow was muffling his steps, and how he was moving and how he approached the camera was a beautiful shot. I remember thinking to myself when I first shot that video that it was a special one.

This is one freaking majestic animal.

And then you had your biggest trend, "Try not to squeak."

Derek: Cassie was quickly becoming one of my biggest Vine stars — I call them the “celebrikitties." Almost every single squeak ... in a Vine is taken within the first 40 seconds of me approaching her enclosure because that's when she's excited. So I walked up to the enclosure and said, "Try not to squeak," and of course she did. And it was a hit!

I try to capture the different personalities of the cats because I've been working with the cats for almost a decade. Pawi (Kannapalli) has this kind of Lenny from "Of Mice and Men" air about him, and he's a little bit derpy and a little bit feisty.

Each cat is very different. When I do Vines of them or I do posts of them, it's not just like, "Hey look at this beautiful tiger," but rather, “Hey, look at Chompers, and here are moments of Chomper's personality," and people relate.

Luca's always been a bit of a shithead! The jokes kind of capture him perfectly.

It's a cool thing — you aren't just seeing this generic animal; you're seeing this creature with its own personality.

So ... big cats in the middle of Texas? This isn't a natural habitat for lions and tigers. How does this happen?

Derek: Many of the other cats have been rescued from … less than savory circumstances. A lot of them come from people who had them as pets that obviously shouldn't have them as pets. People have these romantic notions about a lion or a tiger living in their house, and they don't really think it all the way through; they don't know exactly what they're getting into. Our organization is set up to provide a stable, permanent, and loving home for these animals.

Can you tell me a story about how one particular cat wound up at CARE?

Derek: I can tell you about Tabula, she's one of our lionesses. She actually came in 2008.

There was a private collector up in Midland who had about a dozen or so lions and tigers living in these really ramshackle cages out in his backyard, and they were these really small, tight spaces. She was declawed when she first came over to CARE, and she was accustomed to living in a cage of about 10 by 10 feet, and she'd been living in that cage for close to a decade. ...

When she first got to CARE, the enclosure was spacious and big and there was grass and there were blue skies and it was overwhelming, and she lost her cookies. She hid underneath a wooden housing unit for about three weeks.

Eventually, she started to come out of her shell, lose weight, and approach the fence to actually show affection. She's a lot better off than she was, that's for sure.

People who get these animals as pets and then they declaw them, that's pretty brutal. That comes from the idea that it makes these cats safer, and in a lot of ways, it actually makes them more dangerous. Anyone who works with big cats should know the phrase “claws hurt, teeth kill," and if you take away the “hurt" set of weapons, the only thing that's left is the “kill" set of weapons.

And then the added detriment to the well-being of the animals themselves — you're talking wild animals that weigh 400, 500, 600 pounds that now have to hold themselves on portions of their paws that aren't normally being utilized for sustaining lots of weight like that. … I've seen a lot of cats that have experienced difficulties as they've gotten older; they've become a lot more arthritic too, even, with some of the cats literally having years shaved off of their lives because of the way that they're holding their bodies. We've never declawed any of our cats. The only cats that are declawed are the ones that come to the facility already declawed.

NOTE: While these cuddly lion cubs and baby tigers are adorable, remember that a 500-pound wild beast with dangerous #peets and giant teeth does not make a good pet. Instead of taking in a stray leopard, why not try virtually adopting one of CARE's cats?