Creepy? Yes. Beautiful, too. These underwater statues may help save our coral reefs.

Behold, the artistry created by man and the sea in tandem! 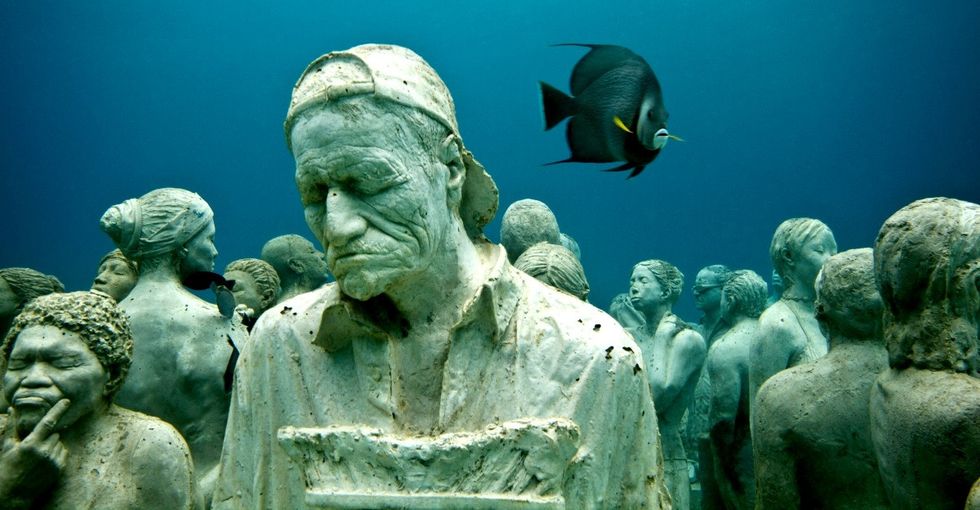 English-Guyanese artist Jason deCaires Taylor is doing his part to save the reefs with these incredible underwater sculptures.

The Phoenix. Image via "The Underwater Museum" by Jason deCaires Taylor/Chronicle Books, used with permission.

Due to climate change and overfishing, 20% of coral reefs worldwide have disappeared in the last 30 years. An estimated 75% of what's left of them is endangered. It's a scary thought, especially considering that marine and human life rely on these reefs that are home to over 1 million aquatic species, help protect our coasts from storm damage, and sustain millions of jobs around the world.

Luckily, there are a lot of smart people like Taylor who are working on ways to reverse the damage.

Taylor's creations are specifically textured to encourage coral growth and help it breathe.

The sculpture's texture can even influence the coral's direction, Taylor explained to The Guardian. For example, a smooth part of a sculpture means "you’ll get coral spawning [...] It’s a bit like our own lives — part of it is what flows in your direction, what nutrients come your way, and part of it is random experience."

The Gardener. Image via "The Underwater Museum" by Jason deCaires Taylor/Chronicle Books, used with permission.

Taylor, who has over 20 years of deep-sea diving under his belt and spent much of his childhood exploring coral reefs in Malaysia, uses the ocean floor as his canvas.

The Silent Revolution. Image via "The Underwater Museum" by Jason deCaires Taylor/Chronicle Books, used with permission.

After he casts the sculptures, he sinks them and lets the ocean do the rest.

The Holy Man. Image via "The Underwater Museum" by Jason deCaires Taylor/Chronicle Books, used with permission.

The resulting art really and truly is alive — constantly growing and changing from moment to moment.

"Humans only have empathy when they see something of themselves," he told The Guardian of his decision to give the sculptures human forms.

"I intentionally made [the figures] very everyday; they all have clothes on — it’s us," he said.

It's no surprise, then, that these strange — yet beautiful — undersea sculptures attract human visitors too. And that's the point.

They're directing much needed attention to coral reefs and their desperate need for conservation.

Museo Subacuático de Arte (MUSA), an underwater sculpture museum that features Taylor's work off the coast of Cancun in Mexico, offers glass-bottom-boat, snorkeling, and scuba-diving tours so visitors can get an up-close look — under close supervision of course.

"[The] sculptures are as vulnerable as the natural reef," writes Karla Munguia Colmenero, PR coordinator for MUSA, in an email. "They need care, they need to be taken seriously."

In 2006, Taylor created the world's first underwater sculpture park off the coast of Grenada, which National Geographic named one of the 25 Wonders of the World.

Taylor's work can be seen a number of places around the world, both above and below the water, including Greece, London, and Canterbury.

Lately, Taylor has been installing works at the newer Museo Atlántico in Lanzarote in the Canary Islands — the first underwater park in Europe.

One artist alone can't save all the coral reefs worldwide, but Taylor's innovative solution that brings people and marine life together underwater is helping inspire the kind of social change that could curtail their total destruction.

We're all in the same boat heading toward an unpredictable environmental future together. It behooves us to treat our oceans and what lies beneath with care, as we would no doubt be sunk without it.