Cool scientists refuse to stand by and let a girl be bullied for her love of bugs.

Former and current bug girls, you've got an awesome newbie joining your ranks. 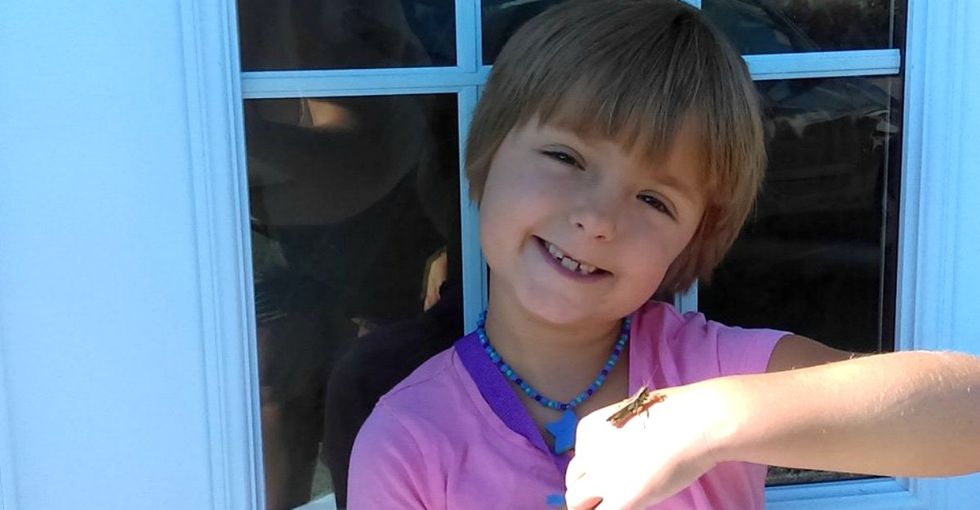 Sophia thrilled over her caterpillars. Image courtesy of Nicole Spencer.

Ever since she could crawl, Sophia's mission in life has been to find bugs and learn everything there is to know about them, Nicole says. She is fascinated by how bugs move and eat, and she loves that they seem to scare most people.

"All she talks about is bugs," Nicole says. "She wants a spider comforter."

Sophia with her bug catchers. Image courtesy of Nicole Spencer.

Thankfully, growing up in in Sarnia, Ontario, Sophia had a like-minded best friend who loved searching for bugs with her.

Together, the girls called themselves "The Bug Hunters," and they'd use their dollar-store bug nets to catch different bugs and bring them home for Nicole to look up online.

Sophia caught herself with her bug net. Image courtesy of Nicole Spencer.

But when they moved 10 hours away, Sophia found herself without a bug-loving BFF, going to school with kids who instead teased her mercilessly for her obsession.

Sophia as a ladybug. Image courtesy of Nicole Spencer.

She was called "weird" and other less kind names, Nicole says. None of the other kids at school wanted to play with her, and Nicole watched as her once-bubbly, curious little girl would come home in tears, begging her mom not to send her back.

Nicole tried talking to Sophia's teachers, but to no avail. According to Nicole, the teachers told her that teasing is a part of going to school, and that Sophia needed to learn to stick up for herself.

Those conversations left Nicole feeling frustrated and disillusioned with the school system, but she wasn't about to leave it at that.

Afraid this bullying would deter her daughter from pursuing the thing she loves most, Nicole decided to call in some backup — namely, the Entomology Society of Canada.

Nicole reached out to the powers that be there to see if they could connect her with an entomologist who could tell Sophia she's "totally cool for liking bugs."

The response she received was beyond encouraging — it was overwhelming.

@CanEntomologist We will skype with her face to face!!! This is our life/business/passion/mission. #bugdork #GIRLSRULE
— The Bug Chicks (@The Bug Chicks)1472145979.0

Within a day, messages began pouring in from entomologists, scientists and other bug enthusiasts from all over the world.

Turns out, "weird" bug girls grow up into awesome women — all of whom wanted to reassure Sophia that she was in good company.

Moms of other little bug girls responded too, asking if Sophia would want a pen pal to discuss bugs with.

According to Nicole, Sophia didn't even know women could be entomologists. Now she has over 80 messages of support and encouragement from entomologists all over the world, 54 of whom are women. Sophia plans to hang the letters all over her room so she never forgets she has an army of bug-loving friends standing behind her.

When Sophia goes to school now, she knows that no matter what she hears from other kids, it's totally cool to love bugs.

Sophia with her grasshoppers. Image courtesy of Nicole Spencer.

"I can’t even describe how it makes you feel as a parent to know that all these people are encouraging your kid. I think it helps her see that everything I’ve been telling her is true. There are other bug lovers out there," says Nicole.

And pretty soon, Sophia will be making her mark on the bug world alongside them. #BugsR4Girls