An awkward boy falls for another guy in this short film, and people are loving it. 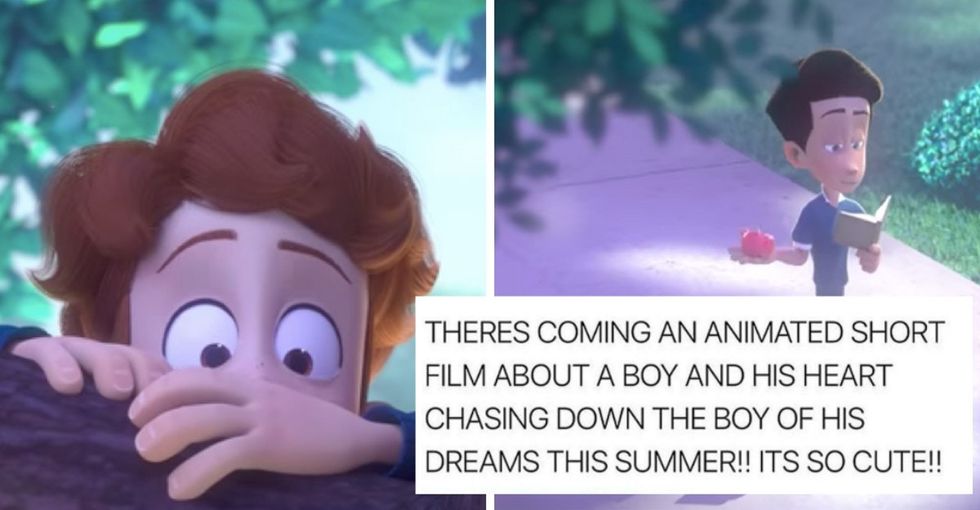 It's just 25 seconds long, and no one says a word in it. But the trailer for "In a Heartbeat" has the internet talking.

Even the two creators behind the project can't believe the response.

Beth David and Esteban Bravo, students at Ringling College of Art and Design in Florida, were "floored" when their Kickstarter page for the short film reached its initial fundraising goal a mere three hours after launching.

The film — the duo's senior thesis project — looks downright adorable, sure. But it's the subject matter that really makes the short stand out among the rest.

Watch the trailer for "In a Heartbeat" (article continues below):

"In a Heartbeat" is about a middle-school boy who "runs the risk of being outed by his own heart after it pops out of his chest to chase down the boy of his dreams."

It's a story that most audiences have not had a chance to see before.

“Being gay is a subject that hasn't been widely explored in computer animation," Bravo explained in a video promoting the film, noting that rates of bullying for LGBTQ teens are much higher than their straight and cisgender (non-transgender) peers.

The film is a heartstring-tugging reminder that those kids — and LGBTQ adults — deserve their stories be told on-screen, too.

“We want to put out a message of love and self acceptance to all the kids and young people who struggle to identify as LGBT+, just like [the main character] Sherwin does,” David said.

David and Bravo have had fun promoting the film using parodies of iconic movie posters, like "The Fault in Our Stars."

Image courtesy of "In a Heartbeat."

Image courtesy of "In a Heartbeat."

But the film's rapidly growing online fandom is even cooler, reflecting audiences' hunger for a delightful, important queer love story like this one.

The hashtag #InAHeartbeat has been filled with creative works from devoted fans on Tumblr and Instagram. And they definitely give you a sense of just how important this film is shaping up to be for many young people.

A little fan art for the upcoming short film In a Heartbeat! Really excited for this and already love the story and characters~ sorry it's kinda sloppy and bad ;n; the film is by @bbethdavidd and @estebravo and let me just say I'm genuinely happy to see LGBT representation, especially when it's shown at a young age, with something that's as sweet and simple as a crush and how happy I am that it's coming from students at Ringling college which has always been my dream art school. Sadly I won't be able to attend but I'm so in love with this film I'd like to thank the creators and the crew for making this happen~ can't wait! #inaheartbeat #shortfilm #lgbt #supercute #fanart #digitalart #iahb

"I'm genuinely happy to see LGBT representation, especially when it's shown at a young age, with something that's as sweet and simple as a crush," one fan wrote on Instagram.

"Okay if you don't know what in a heartbeat is don't talk to me," joked another.

Some fans are even pulling out the all-caps to express their excitement.

"We're very touched by the response we've gotten so far and we're happy to know that our project has already had a positive impact on so many people," the creators say of the overwhelming fandom.

"It proves to us that there is a need and a want for media that addresses LGBT+ themes in a positive and lighthearted way," they note, "and gives us hope that films like this could be more widely accepted and produced in the future!"

To learn more about the short film, visit its Kickstarter page.