Alyssa Milano proposed a sex strike to protest restrictive abortion laws but it kind of misses the point. 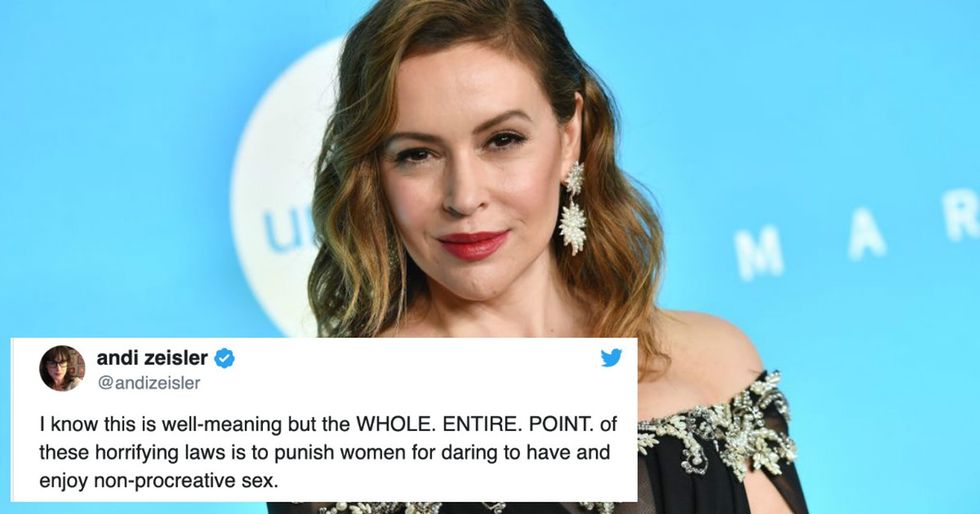 Alabama and Georgia have passed restrictive and possibly illegal abortion laws, and, no surprise, a lot of people are upset about it. Many Hollywood productions that shoot in Georgia are departing from the state in protest.

Jordan Peele and J.J. Abrams announced they will continue to shoot Lovecraft Country in Georgia, but the money they earn from the show will go straight to two charities working to overturn the law.

But actress Alyssa Milano, who shoots Insatiable in Georgia, came up with probably the most attention-grabbing (and kind of problematic) way to protest the law. She called for a sex strike.

Georgia’s new law forbids abortion when a heartbeat is detected, roughly six weeks into a pregnancy. Legal abortions after a heartbeat is detected are allowed if the pregnancy jeopardizes the life of the mother, or if the fetus will not survive outside the womb. Abortion is also allowed in the case of rape or incest as long as the woman files a police report.

“Our reproductive rights are being erased. Until women have legal control over our own bodies we just cannot risk pregnancy. JOIN ME by not having sex until we get bodily autonomy back. I’m calling for a #SexStrike. Pass it on,” Milano wrote on Twitter.

Our reproductive rights are being erased. Until women have legal control over our own bodies we just cannot risk p… https://t.co/TsIN3KUQM7
— Alyssa Milano (@Alyssa Milano) 1557542438.0

But others were quick to point out the flaws in Milano’s logic. The idea of a sex strike reduces sex to a bargaining tool. It reinforces the misogynistic ideas that women’s bodies are there to give sexual pleasure to men, women are not supposed to enjoy sex, and refusing to have sex with a man is a punishment.

I know this is well-meaning but the WHOLE. ENTIRE. POINT. of these horrifying laws is to punish women for daring to… https://t.co/j1QlR8pSGU
— andi zeisler (@andi zeisler) 1557587666.0

Rape has nothing to do with sex - it’s about hatred and power, the same causes of women being stripped of their rig… https://t.co/ifZxMFwuWk
— Shannon Watts (@Shannon Watts) 1557592377.0

Hi the idea of a #sexstrike just perpetuates the idea that sex is something women give and men take, creating a pow… https://t.co/lrsi0D5DVs
— Maria Del Russo (@Maria Del Russo) 1557607004.0

@Alyssa_Milano Living under patriarchy has already robbed me of safety, autonomy, opportunities, and trust in our i… https://t.co/iO20VoIA4b
— Kristi Coulter (@Kristi Coulter) 1557595073.0

Milano said that the idea of a sex strike was to get people’s attention and to raise awareness of the issue, which it did. “A #SexStrike is another way for people who have the potential to get pregnant to call attention to this systematic onslaught and assert the power to change our own destinies,” Milano said.

Sure, the whole Lysistrada thing might have worked in a time when men were writing books with titles like How to Train Your Wife, and nobody batted an eye. But we’ve progressed a lot since Ancient Greek times, and so must our ideas of what should be considered a protest.

The actor lived in Uvalde, Texas until he was 11.

Oscar-winning actor Matthew McConaughey made a heartfelt plea for Americans to “do better” on Tuesday after a gunman murdered 19 children and 2 adults at Robb Elementary School in his hometown of Uvalde, Texas.

Uvalde is a small town of about 16,000 residents approximately 85 miles west of San Antonio. The actor grew up in Uvalde until he was 11 years old when his family moved to Longview, 430 miles away.

The suspected murderer, 18-year-old Salvador Ramos, was killed by law enforcement at the scene of the crime. Before the rampage, Ramos allegedly shot his grandmother after a disagreement.

“As you all are aware there was another mass shooting today, this time in my home town of Uvalde, Texas,” McConaughey wrote in a statement shared on Twitter. “Once again, we have tragically proven that we are failing to be responsible for the rights our freedoms grant us.”