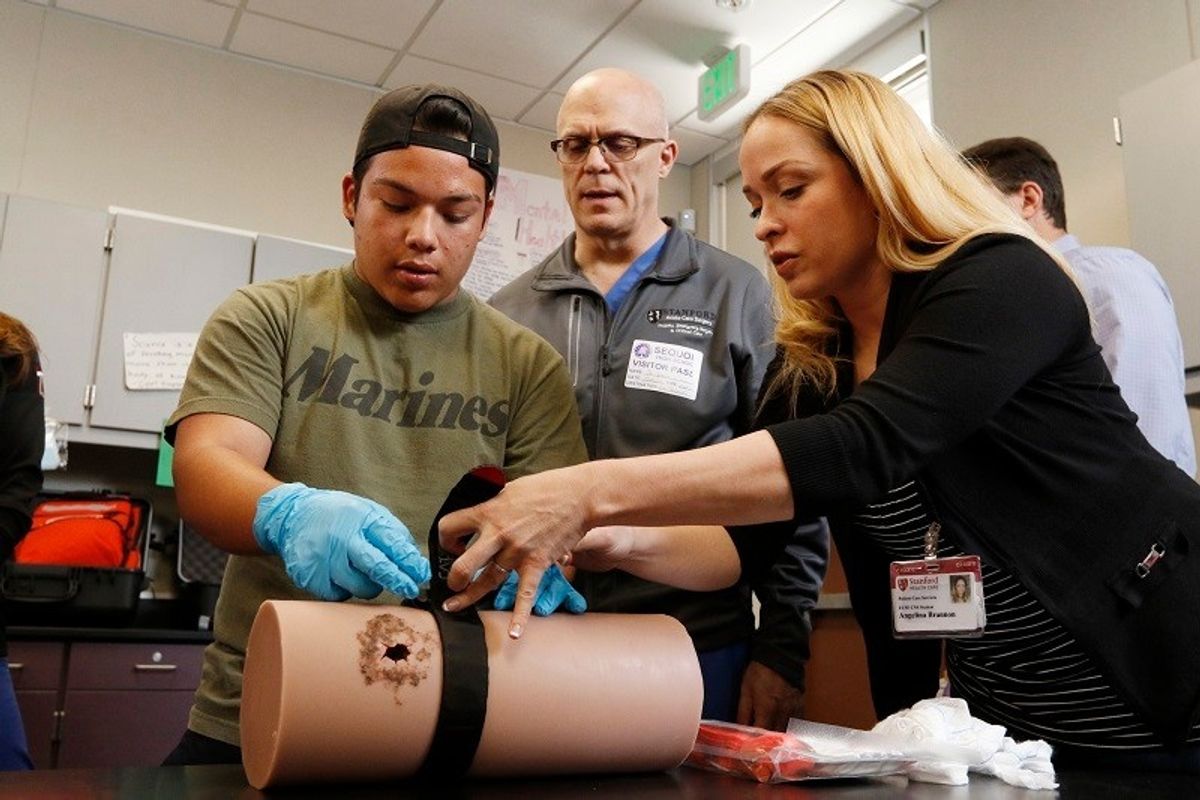 I was teaching in a public high school classroom the day that two heavily armed students walked into Columbine High School in Colorado and shot 36 people, killing 15 of them. My students and I watched in horror as aerial news footage showed blood-splattered students fleeing the building. I looked around at the 15 and 16-year-olds under my supervision, watching a piece of their innocence shatter.

The thought of preparing for such terror ourselves didn't cross our minds, though. It was a terrible tragedy, but it was a fluke. A one-off. An anomaly.

"School shootings" have become a thing—a distinctly American phenomenon. After every single one, the U.S. has exploded into debates over guns and rights and what should be done. And after every single one—even after 20 six- and seven-year-olds were shot to death in their classrooms—federal gun legislation has never gotten off the ground.

Instead, we somehow accept that children being gunned down at school is the price we pay for freedom. So we prepare for it. We train for it. We drill for it.

Preparation may sound like a smart, sound thing to do, but seeing and hearing what that actually looks like within the walls of America's schools should give us all serious pause.

A school custodian from Texas shared his experience with a 'Stop the Bleed' training he had to go through at his school, and it's absolutely heartbreaking.

"Today I was required to attend CPR and first aid training as part of the beginning of the new school year, which I am more than happy to do. It's good to have knowledgeable folks around in the school who can be there in case of a medical emergency, and through scouting as a kid and as a unit leader I had some rudimentary knowledge going into it. Things are going as expected, we're doing chest compressions on dummies, watching videos about various situations, it was a little boring at times honestly, but informative.

Then we get to the last hour. It's a new program called "Stop the Bleed" and it's training on how to administer first aid to victims of a mass shooting in the school. So there I am with the school secretary, applying tourniquets, packing gauze into the simulated bullet wounds of a prosthetic limb, applying pressure and wrapping ace bandages. I'm being told these children and teachers will be spurting blood, screaming, writhing, and dying. I'm given pointers about how not to store the tourniquets together because the Velcro will get entangled, but not to put them in individual plastic bags either because when your hands are slippery with blood, you can't get it open and in the moment you'll use your mouth and get blood in your mouth.

I'm a f'ing custodian learning how to perform combat mass casualty triage to children without morphine. I'm learning the difference between what a 9mm entry and exit wound looks like compared to the complete annihilation of what an AR15 or AK can do. This is what our country has accepted as the new normal.

After Sandy Hook, nothing happened, and these shootings keep on happening, and the people who are infatuated with guns and weapons of war would rather I be trained as a Vietnam style medic, than to create a society where I can just wax floors and fix broken desks. I'm sickened, I'm rocked to my core. This is unacceptable and it's wrong. #ThisIsAmerica"

Seriously, America. Is this really how we want to live? Is this what "the land of the free" looks like? Because it sure as hell doesn't feel like freedom when we have custodians and school secretaries practicing treating gunshot wounds on schoolchildren.

RELATED: The American Psychological Association says bigotry and gun laws are to blame for mass shootings, not 'mental illness'

As an interesting side note, Hurt added a comment to his post explaining how his Christian faith actually influences his decision not to own a gun for self-protection. It's a refreshing perspective that often gets lost in the shuffle of America's tendency to place people into two distinct ideologies, and a reminder that one political wing does not carry the keys to Christianity. He wrote:

"The only thing I would like to add is that my belief system is based in Christianity. It's the foundation that guides me to never own a gun for the use of hurting or killing another living thing. I respect hunters, there is a problem with feral hogs rooting up farmers fields, coyotes harming livestock, deer overpopulation etc. I've enjoyed shooting paper targets and bottles off of fenceposts before and it's fun to use a bolt action .22 with a 4x scope to work on aim. But my beliefs are from the teachings of Jesus Christ who clearly said, the old law was an eye for an eye, and a tooth for a tooth, but it is replaced with a new law which is to love your neighbor. Jesus specifically said if someone takes your coat from you, give him also your shirt, so I clearly don't need a gun to protect my possessions. Let them be taken. Jesus clearly said if someone hits you in the face, turn the other cheek, and then he backed it up with his actions. He had the power of a billion nuclear warheads in his pinky finger alone and did not return harm to the Roman soldiers who beat him, or put a crown of thorns on his head, nailed him to a cross, or stabbed his side with a spear. I am called to be Christ-like as a Christian, and I don't think he would be packing heat if he were present in human form today. So I won't either. Americans are so caught up with wearing Christianity as a badge of honor, but I don't see his teachings a lot of times in their works. Instead we amplify the old law He replaced and say a bullet for an eye, a bullet for a tooth."

Well said, Mr. Hurt. When we place more value on guns than on children's lives, we are a society that has completely lost its way.