A furious, heartbroken response to San Bernardino that everyone needs to read. 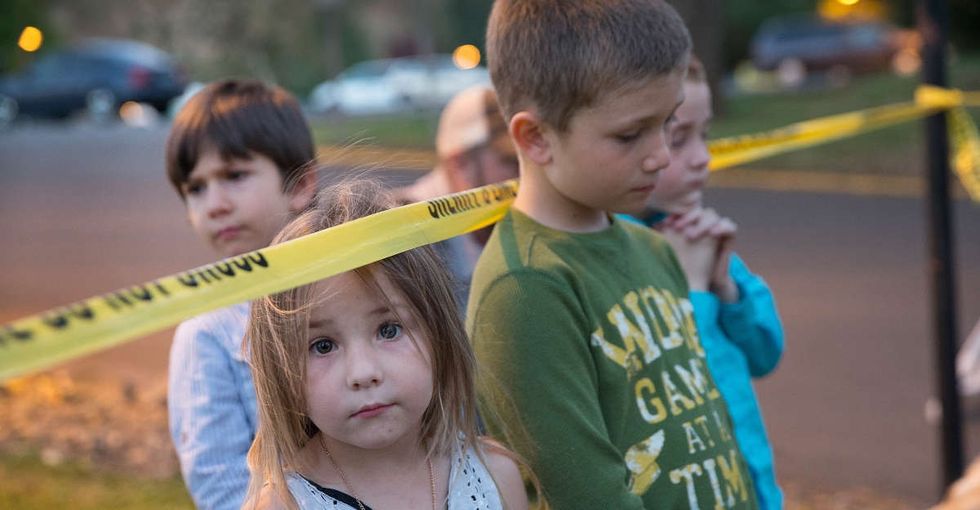 I'm sick and tired of this.

Police escort family members of employees of the Inland Regional Center in San Bernardino, California, the site of yet another mass shooting Wednesday. Photo by Patrick T. Fallon/Getty Images.

I'm sick and tired of watching helplessly as innocent people are gunned down nearly every. single. day. for no reason at all.

I'm sick and tired of hearing there's no way to prevent this.

I'm sick and tired of being told not to make this political. The only people who benefit from "not making this political" are those who don't want anything to change.

I'm sick of tired of hearing that the rate of gun murder has nothing to do with the availability of guns. Yes, it very much does.

I'm sick and tired of hearing that killers will kill with or without guns. Yes, some will still try — with knives, or bats, or their own fists. But it will be much easier to stop them before they cause mass carnage.

I'm sick and tired of hearing politicians say, "Our thoughts and prayers are with the victims." You know what's better than thinking and praying? Doing something.

I'm sick and tired of being reminded that it's actually illegal for the federal government to research gun violence. That's absurd.

I'm sick and tired of hearing that stricter gun laws won't make a difference. After a mass shooting in 1996, Australia banned most private gun sales, bought back hundreds of thousands of firearms, and severely restricted who was legally allowed to own them. Guess what? It hasn't had a mass shooting since.

I'm sick and tired of hearing that more people die in car accidents, so it would be hypocritical to do anything.

No they don't. Not anymore. (And the fact that we don't do more about road fatalities is also shameful and shocking.)

I don't need a "good guy with a gun." I need the bad guy with a gun to never have a gun in the first place. Or, if that's too much of a bother, I need the police. The police are far from perfect — and frankly, need to take a good long look at how often, and against whom, they use their own guns — but in a mass shooter situation? Give me a trained, professional police officer over a rando with a chip on his shoulder and a delusional "Die Hard" fantasy any day of the week.

I'm sick and tired of hearing that "None of this would have happened if only the victims had been armed." The cops at that Planned Parenthood in Colorado Springs? They were armed. They still got shot. The military police at Fort Hood, Texas, were sure-as-shit armed, and 14 people still lost their lives, many of them soldiers trained to fight in one of the best-equipped, most professional armies in the history of the world. The notion that things would have turned out differently if the county employees in San Bernardino or the schoolchildren at Sandy Hook Elementary were packing heat is laughable and obscene.

I'm sick and tired of seeing this tweet go viral every few days:

And hoping to God it's not true, while believing — with ever-increasing certainty — that it is.

I'm sick and tired of more deranged open-carry laws being passed in this country, and having to worry that now every minor argument with a stranger has the potential to turn into a violent standoff.

I'm sick and tired of hearing that I should be afraid — very afraid — of desperate, impoverished refugees when thousands upon thousands more people are shot to death by American citizens every year.

I'm sick and tired of hearing that the problem is only illegal guns, when nearly every mass shooter in the last six years acquired their guns legally. At least two of the guns used in the shooting in San Bernardino were purchased legally.

I'm sick and tired of living in a country where — in most places — buying a deadly firearm is almost as easy as buying a sandwich.

I'm sick and tired of this being the new normal.

Children pray for the victims of the October shooting at Umpqua Community College in Oregon. Photo by Scott Olson/Getty Images.

I'm sick and tired of this being told that even the most basic, no-brainer, common-sense gun laws will never be passed because it's not a winning political issue. The only way to make it one is to call your senators, representative, state legislator, mayor, county treasurer, school board president, or dog catcher and not shut up about it until they can't brush it off any longer.

Because something has to change. Now. Not later.