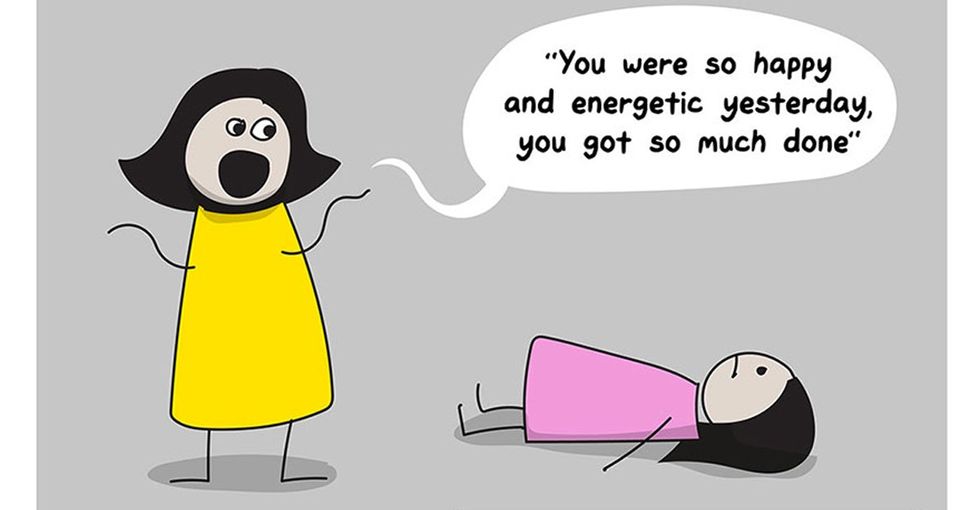 Depression and anxiety disorders are real illnesses. Mental illnesses are not "in someone's head," they're not something a person can "just get over," and they affect so many of us — over 40 million people in the U.S. alone.

Despite how common they are, it's still really difficult to explain to people who may have never experienced a mental illness.

Enter: cute, clever illustrations that get the job done.

Nick Seluk, who creates the amazing comics at The Awkward Yeti, heard from reader Sarah Flanigan. She shared her story of depression and anxiety with him. If it could help even one person, she said, it would be worth it.

Nick turned her story into a fantastic comic that perfectly captures the reality of living with depression and anxiety.

"I've been through and seen depression and anxiety in action, and thought Sarah's story was so perfectly simple," he told me. "We all get sick physically and mentally, but we need to be open to talking (and laughing) about [it]."

I couldn't agree more, and I think this comic will resonate with a lot of people.

"The hardest part of living with depression and anxiety for me is feeling like I have to hide it," Sarah said. "I've always been known as the happy one in my group of friends. Everyone's always so shocked when I tell them I have depression or they see the self-harm scars."

"It's much harder than it should be to say, 'Hey, I have depression and I've been struggling with self-harm since I was 10 and I just really need your support to get me through tonight,'" Sarah explained.

Let's all keep working to make it easier for our friends, family members, and ourselves to get support. Let's keep talking about it.