7 real things you can do right now about the catastrophe in Aleppo. 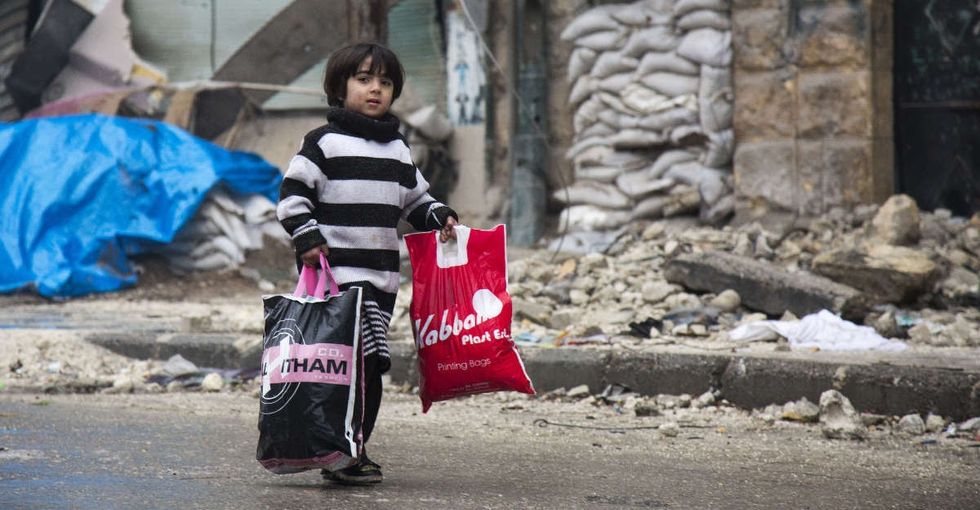 Syrian government troops are attempting to capture the remaining sections of Aleppo, and its citizens are in grave danger.

The humanitarian disaster, which has been ongoing for months, has gotten far worse in the past few days, with terrified residents, caught between government forces, Russian airstrikes, and rebel forces tweeting desperate pleas for help and final messages to loved ones. Reports of women committing suicide to avoid being raped and civilians being executed by regime forces have begun to filter out of the city.

Meanwhile, the once-thriving region has been reduced to rubble and chaos over the course of the past several months. Russia has announced an end to the military operation, claiming victory, and reports of a cease-fire between government and rebel forces have been issued, but both have yet to be confirmed by the United Nations at the time of this writing. 50,000 civilians are still believed to be in the eastern part of the city.

It's easy to feel helpless and overwhelmed and want to turn away from a story like this. The news is bleak — and likely to get bleaker. But those of us with the good fortune to live in safety have a responsibility to do what we can to help. And there are ways to help.

Most involve donating to organizations that are on the ground in or around Aleppo. We know not everyone has money to spare, but if you can make it work, providing much needed funds to these organizations is the most efficient way to assist at a crucial moment like this.

The White Helmets respond to the aftermath of an airstrike. Photo by Mohamed Al-Bakour/Getty Images.

Led by Raed Al-Saleh, this homegrown search-and-rescue force, which operates in rebel-controlled Syria, including Aleppo, has saved tens of thousands of their countrymen over the course of the conflict — pulling bombing victims out of rubble, raising money for prosthetics, and supporting the families of fallen comrades.

Some critics of the organization argue that the group hides a political mission, which advocates for regime change and policies that have exacerbated the violence. But right now, they're saving lives, and in a crisis moment, that matters more.

The aftermath of the destruction of a Doctors Without Borders-supported hospital in Syria. Photo by Omar Haj Kadour/Getty Images.

The global, nonpartisan medical relief organization is still active on the ground across the country, providing local medical facilities, which have been decimated by the war, with equipment, supplies, and, where possible, personnel.

You can give them money here.

The group runs dozens of medical operations in Syria and the countries that have taken in the largest share of refugees from the war, treating nearly 3 million Syrians in 2015.

You can sign up to volunteer or donate here.

The IRC supports people who flee war and conflict in countries around the world, including Syrian refugees.

Here's how to support them in turn.

5. Support Save the Children.

Save the Children works with internally displaced and refugee children and families affected by the conflict.

You can read more about what they're doing and pledge support here.

Londoners and residents of Istanbul are taking to the streets to demand action from local officials on the growing crisis.

If you live in those cities, join them to demand action from local officials. Or organize a protest effort where you are.

There are millions of them all over the world. The terrorization and dismemberment of Aleppo? This is what they're fleeing. This exactly.

Since refugees from the conflict started flooding into the West in 2011, their fate has become a political football, exploited by candidates and causes in countries across Europe and North America to stoke fear and win elections. This should stop. The most compassionate thing we can do is to put aside our fears of terror and the unfamiliar and give them a chance to rebuild their lives among us. And to give those who still suffer on the ground hope that there's a better life available to them, should they manage to escape.

You can donate to the UN Refugee Agency. Or Questscope, which provides education and counseling resources to refugees living in Jordan. Or the Migrant Offshore Aid Station, which helps shepherd refugees making the perilous sea-crossing into Europe to safety.

More importantly, you can call your senator or congressperson and tell them that you won't support them if they don't support expanding the U.S.'s Refugee Admissions program to admit more than the woefully inadequate 10,000 Syrians we resettled in 2016.

What's happening in Aleppo isn't just a humanitarian tragedy, it's a moral crisis. It's a time to put aside our fears and apathy, to get real, and to act as best and as effectively as each of us can.

If we don't, we'll never stop asking ourselves why we didn't.